Musing About Memory Bandwidth & The Test

As we discussed in our introduction, NVIDIA is launching the GeForce GT 640 exclusively as a DDR3 part. Because of the lack of memory bandwidth this is going to hold back the performance of the card, and while we don’t have a GDDR5 card at this time it will still be pretty easy to see what the performance impact is once we jump into our gaming performance section and compare it to other cards like the GTS 450. 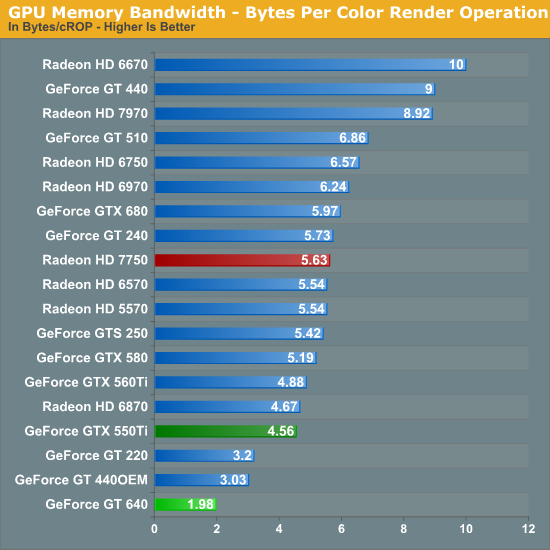 Because of the nature of this graph cards are all over the place, with cards with particularly unusual configurations (such as the 4 ROP GT 440) appearing near the top. Still, high-end cards such as the GTX 680 and Radeon HD 7970 have among the highest ratio of memory bandwidth to color render operations, while lower-end cards generally have a lower ratio. At 1.97 B/cOP, the DDR3 GT 640 has the lowest ratio by far, and is only 66% of the ratio found on the next-lowest card, the GeForce GT 440 OEM. The fact of the matter is that because of its high clockspeed and 16 ROPs, the DDR3 GT 640 has by far the lowest ratio than any other card before it. 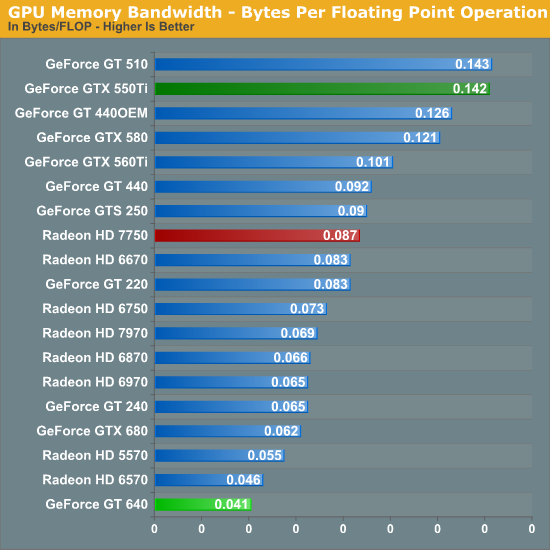 Our second graph is the ratio of memory bandwidth to shader operations (bytes per FLOP). Shaders aren’t nearly as bandwidth constrained as ROPs thanks to liberal use of register files and caches, but I wanted to take a look at more than just one ratio. Compared to our ROP chart the GT 640 isn’t nearly as much of an outlier, but it still has the lowest ratio of memory bandwidth per FLOP out of all of the cards in our charts.

Now to be clear not all of this is NVIDIA’s fault. Memory speeds have not kept pace with Moore’s Law, so GPU performance has been growing faster than memory speeds for quite some time leading to a general downwards trend. But the GT 640 is a special card in this respect in that there has never been a card this starved for memory bandwidth. This is further impacted by the fact that while GDDR5 speeds have at least been increasing as a modest rate over the years as GPU memory controllers and memory chip production have improved, DDR3 memory speeds have been locked in the 1.6GHz-1.8GHz range for years. Simply put, the gap between GDDR5 and DDR3 has never been greater. Even a conservative memory clock of 4.5GHz would give a GDDR5 card 2.5 times the memory bandwidth of a typical DDR3 card.

Of course there’s still a place in the world for DDR3 cards, particularly in very low power situations, but that place is shrinking in size every day. If and when it arrives, we expect that the GDDR5 GT 640 will quickly trounce the DDR3 version in virtually all gaming scenarios. DDR3 for a card this power hungry (relatively speaking) and with this many ROPs just doesn’t look like it makes a lot of sense.

For our test we’re using the latest NVIDIA drivers at the time our benchmarks were taken (301.42), and for AMD’s cards we’re using the new Catalyst 12.6 betas. For analysis purposes we’ve thrown in a couple of additional cards that we don’t normally test, such as the GDDR5 GeForce GT 240. The GDDR5 GT 240 has 43.5GB/sec of memory bandwidth but with a far older and less powerful GPU, which makes for an interesting comparison on progress.