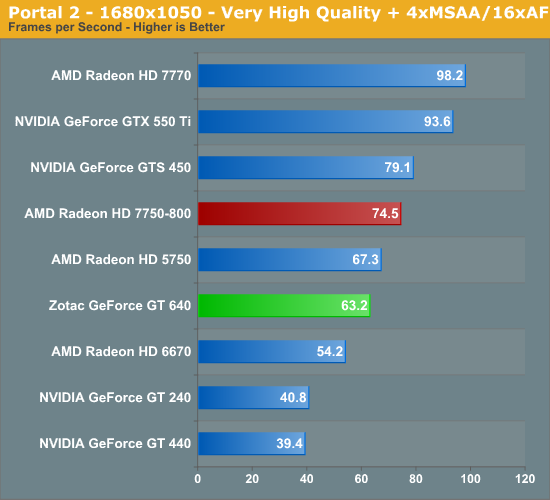 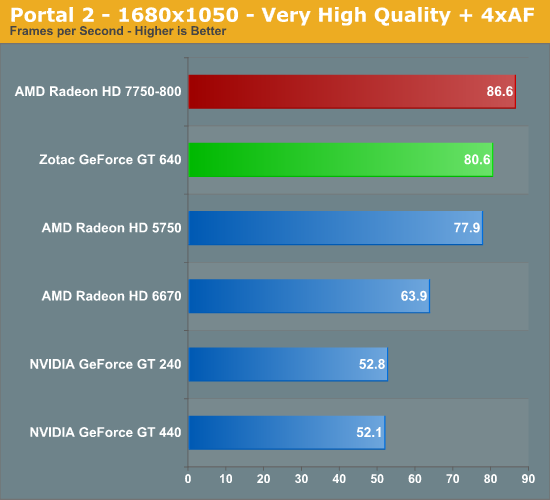 Portal 2 ends up being one of the better games for the GT 640, both on an overall basis and on a competitive basis. Overall we’re able to run Portal 2 at 1680 with maximum quality and with MSAA, and still hit 60fps, marking the first time we’ve been able to use such high settings on this card. At the same time the GT 640 is about as close to the 7750 as it’s ever going to get; it still trails by over 15% but this is a far better showing than earlier with games like DiRT 3. Performance relative to the GT 440 also once again looks good, with the GT 640 improving on the GT 440 by 60%.

Its popularity aside, Battlefield 3 may be the most interesting game in our benchmark suite for a single reason: it was the first AAA DX10+ game. Consequently it makes no attempt to shy away from pushing the graphics envelope, and pushing GPUs to their limits at the same time. Even at low settings Battlefield 3 is a handful, making it difficult to run on low-end GPUs. 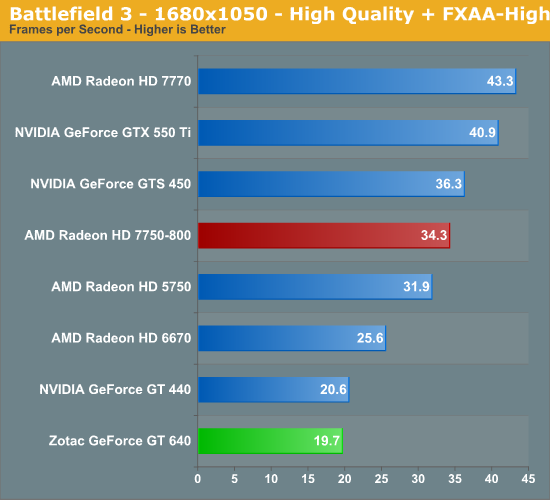 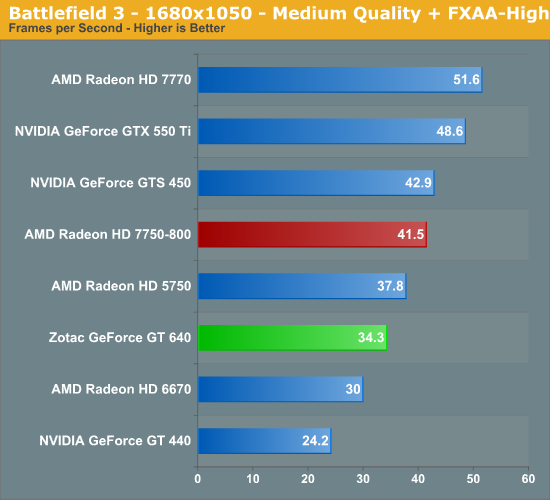 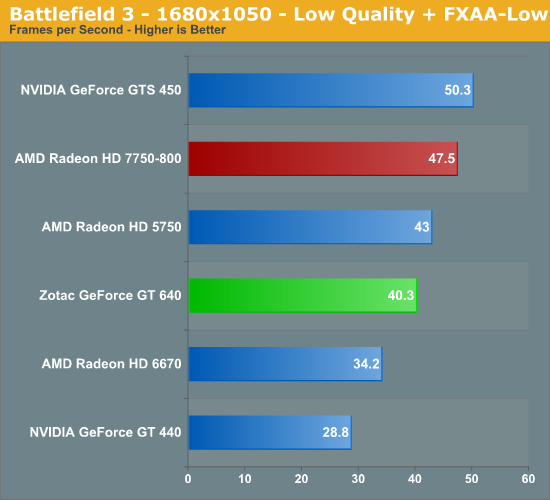 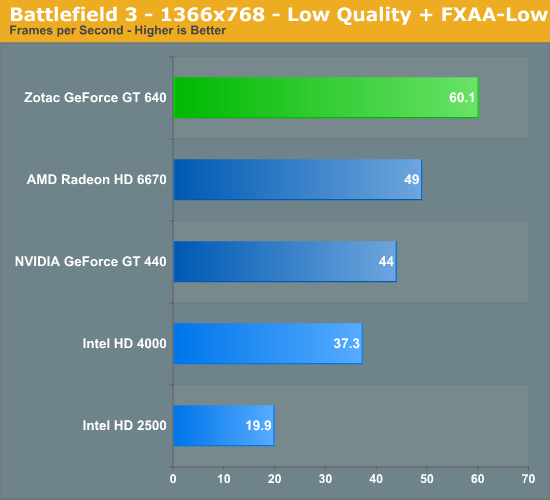 We ultimately had to iterate through several different settings to find something the GT 640 could handle with BF3. 1680 is right out – even at minimum quality it could only hit 40fps in our test, which in a severe firefight means that framerates will bottom out at around 20fps. Only by finally backing off on the resolution to 1366x768 were we able to hit 60fps. So it’s definitely playable, but 1680 just isn’t going to happen.

Of course it goes without saying that the GT 640 once again gets left in the dust here by its competition. At High quality (our common benchmark for all single-GPU cards) it can’t even surpass the GT 440 due to the lack of memory bandwidth, and at lower settings the 7750 is still 20% ahead. At best you can point to our iGPU results and see that the GT 640 triples the HD 2500’s performance, reflecting the fact that even a slow dGPU is still faster than a slow iGPU. 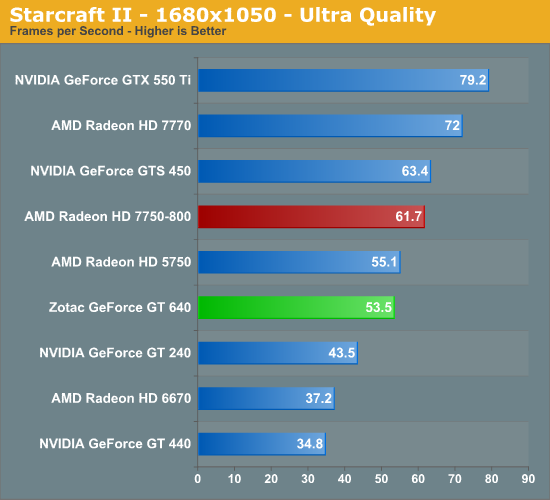 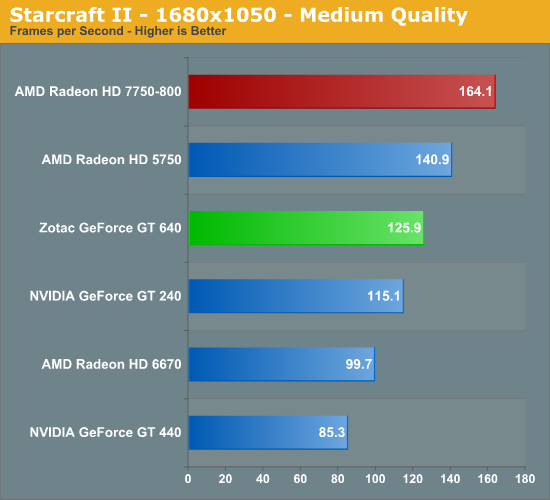 Starcraft II is another game that NVIDIA tends to do well in, and while it’s still not enough to make the GT 640 competitive with the likes of the 7750 or GTS 450, it’s enough to reduce the gap. The 7750 leads by only 15% here, the smallest lead of the day. Meanwhile the GT 640 improves on the GT 440 by 53% here, once again showcasing the impact of such a large increase in ROPs, shaders, and texture units.

Bethesda's epic sword and magic game The Elder Scrolls V: Skyrim is our RPG of choice for benchmarking. It's altogether a good CPU benchmark thanks to its complex scripting and AI, but it also can end up pushing a large number of fairly complex models and effects at once. This is a DX9 game so it isn't utilizing any advanced DX11 functionality, but it can still be a demanding game. 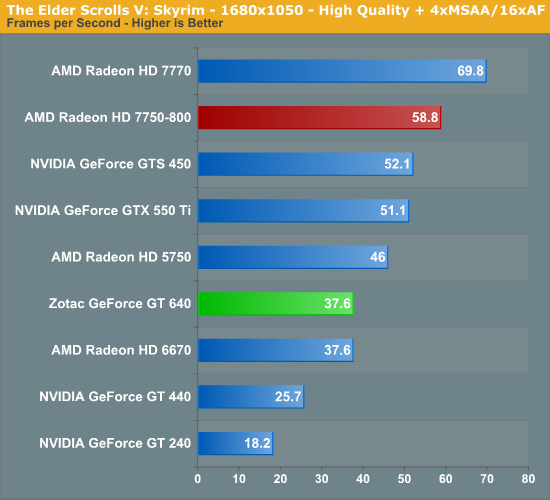 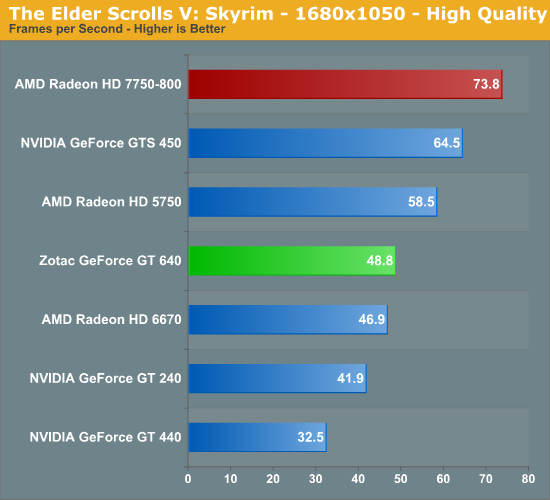 If we iterated through enough settings I’m sure we’d find something that the GT 640 could hit 60fps on, but thankfully it’s generally playable above 30fps, so 1680 at High quality should be fine for most users. Here it narrowly beats the 6670, but the 7750 and GTS 450 are well ahead, once again reflecting the relatively poor gaming performance of the GT 640.

Our final game, Civilization 5, gives us an interesting look at things that other RTSes cannot match, with a much weaker focus on shading in the game world, and a much greater focus on creating the geometry needed to bring such a world to life. In doing so it uses a slew of DirectX 11 technologies, including tessellation for said geometry, driver command lists for reducing CPU overhead, and compute shaders for on-the-fly texture decompression. And the release of a new expansion pack today should keep Civ V relevant to gamers for some time to come. 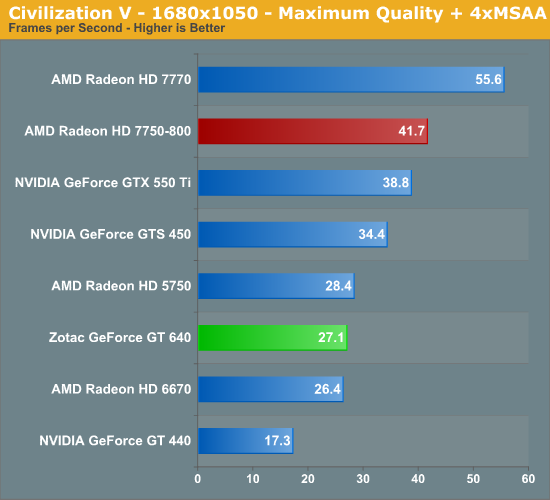 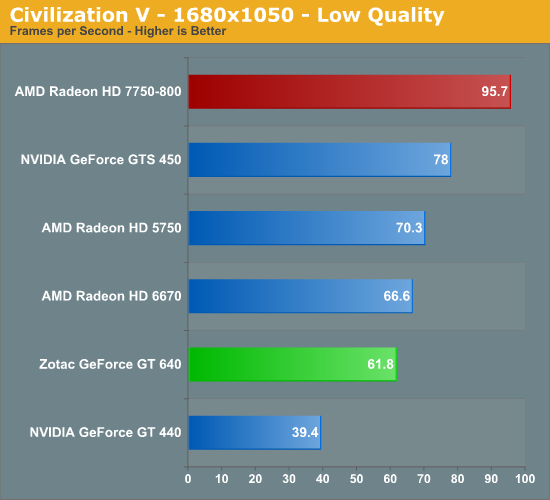 With Civilization V the GT 640 starts roughly the same as it started: poorly. The 7750 leads by over 50% at our highest settings, a gap wide enough to make the 7750 more than playable at these settings while the GT 640 struggles. The 56% improvement from the GT 440 means that NVIDIA is still making solid gains compared to the GT 440, but it’s just not enough.