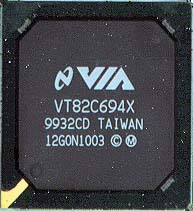 VIA's Apollo Pro 133A chipset has been around for 9 months now and in that time, it has become much more of a contender than we originally expected it to be. Considering that its predecessor, the Apollo Pro Plus, went unnoticed by our community due to its inability to compete with the BX chipset, our expectations for the 133A were naturally very low.

Remember that back then, we still had high expectations for Intel's 820 chipset and the RDRAM that it would use. Even if RDRAM was to fail, we were still sure that the 820 chipset would somehow support SDRAM; little did we know that the price of RDRAM would be so far above that of SDRAM that it wouldn't be an option and that the i820's SDRAM “support” was made possible through a buggy MTH that would do nothing more than cause more problems and slow down your system's performance to levels lower than the previous generation BX setups.

VIA caught the break of a lifetime courtesy of Intel's relatively unappealing 820 chipset launch and the problems associated with the 820 + MTH solution. Because of this, the VIA Apollo Pro 133A is a much more attractive solution than it ever would have been had the 820 chipset truly turned out to be a next-generation BX chipset with 133MHz FSB, PC133 and Ultra ATA 66 support.

We rounded up twelve motherboards based on the VIA Apollo Pro 133 and the 133A back in February and basically concluded that the majority of motherboard manufacturers had a lot of work to do on their solutions before they would be fit for public consumption.

With the exception of a handful of manufacturers such as Gigabyte and ECS, most of the boards we tested just 5 months ago varied in performance so greatly that it reminded us of the way the motherboard industry was during the Socket-7 days of the FX and HX chipsets. Ever since the advent of the LX chipset you really didn't have to worry about whether or not the board you were picking up would perform like a speed demon or a piece of junk, but our last Apollo Pro 133A roundup proved that statement wrong.