Intel's Cedar Trail based Atom N2800 doesn't look completely bad, at least on paper. It offers a decent improvement over last generation's woefully anemic Atoms, and the GPU at least appears to address the major complaints we had with Pine Trail's pitiful GMA 3150. Unfortunately, Intel has had a history of getting their IGPs to perform well in Futuremark benchmarks only to have performance and compatibility fall apart in practical applications, and that history is repeating itself here.

After having used the LGX AG150, I don't have any trouble believing the rumors that Intel has been having serious problems with the PowerVR core behind the GMA 3650. I'm not going to fault Logic Supply for this; if you're going to build a fanless system that can be deployed cheaply and in significant numbers, I think it's hard to do better than what they've achieved here. However, the responsibility for some of the stability issues and/or lack of support should be placed squarely on Intel's shoulders.

The first review unit I received from Logic Supply had serious issues with screen tearing and stuttering even on the desktop, with or without Aero Glass enabled. When I checked for updated drivers and found them, the updated drivers essentially locked up the system and prevented me from re-entering Windows. Rather than have me go through the trouble of reformatting and trying to get Intel's drivers to work, Logic Supply simply sent me a second review unit that had the new GMA 3650 drivers slipstreamed into the Windows installation. Just think about how bad the situation would have to be to produce a paragraph like this one; the GMA 3650 drivers were incapable of handling a blank desktop. It didn't matter if I changed the resolution or reduced Aero Glass, it just wasn't happening.

The updated drivers fixed the situation...sort of. The GMA 3650 can now run Aero Glass at 1080p, but extremely slowly. Trying to move windows or even do anything results in a tremendous amount of lag in the system. Understanding Atom tends to be confined to the Aero-free Windows 7 Starter, it must be noted that the last generation of Atom processors was actually able to handle Aero Glass just fine. Circumstances are dire when Aero Glass gives your graphics solution problems.

What about H.264 support? Jarred took a quick look at an N2600-based netbook from ASUS here, but the bottom line is that while DXVA support is mostly in place, high definition playback from YouTube, Hulu, or Netflix is still largely out of the question. In 2012, when smartphones and tablets are able to handle most of these tasks, that's just not acceptable.

Most of these factors are beyond the control of Logic Supply, but thankfully the ones that are within Logic Supply's power are handled well: power consumption and thermals. Logic Supply advertises the system with a TDP of just 15 watts, and while our results weren't quite that low, they were still pretty good. 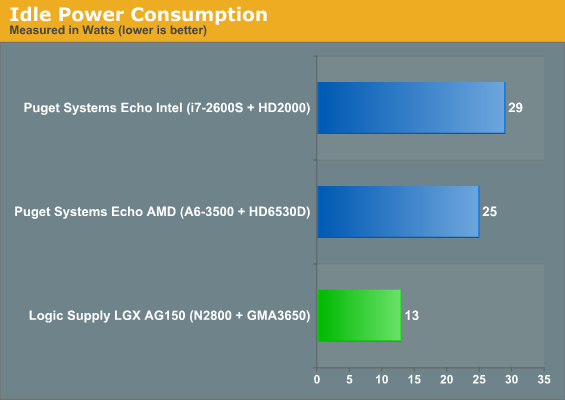 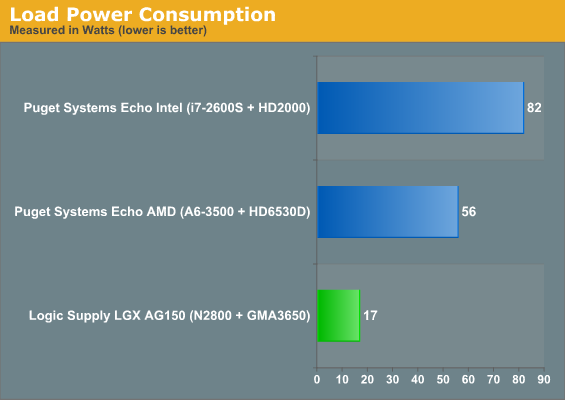 Idle consumption has come down tremendously on most modern processors, but a 32nm Atom still doesn't ask for much when it's not doing much. Load power does break the 15-watt TDP that Logic Supply advertises, but only by two watts, certainly still reasonable—plus, if Logic Supply isn't accounting for PSU efficiency, that would easily explain the extra 2W. Thermals for the system are also excellent; the RAM ran at a nearly consistent 50C, while the CPU cores never really broke 45C under sustained load. And of course, since the system is completely fanless and has no moving parts, meaning it also produces no noise.