As always, we’re wrapping up our look at a video card’s stock performance with a look at power, temperature, and noise. As GTX 670 is a lower clocked, lower power, harvested version of GK104, it should do even better than GTX 680 here. Remember, the power target for GTX 670 is only 141W.

Stopping to take a quick look at voltages, we find that NVIDIA hasn’t really adjusted the voltages of GTX 670 compared to GTX 680. Because GTX 670 has a lower maximum boost bin than GTX 680 it ramps up to 1.175v a bit sooner, but otherwise it’s still covering the same range of voltages as opposed to having a lower max voltage to further improve the power consumption. EVGA however does just that, topping out at 1.162v. They’ll need all the power savings they can get since power consumption is inversely proportional to performance under NVIDIA’s power target system.

On that note before we jump into our graphs we wanted to try something new: a look at the average core clockspeed during our benchmarks. Because of GPU boost the boost clock alone doesn’t give us the whole picture – particularly when also taking a look at factory overclocked cards – we’ve recorded the clockspeed of our GPU during each of our benchmarks when running them at 2560x1600 and computed the average clockspeed over the duration of the benchmark.

In spite of the GTX 670’s boost clock of only 980MHz, we see that it spends almost its entire time above that, and indeed spends its whole time above the base clock. As far as games go, with the exception of Portal 2 it’s always in the mid-1000s, whereas the GTX 680 was only a bit higher at the high 1000s. This is a big part of why the GTX 670 has performed so well in our tests: it may be rated lower, but in fact it can reach clockspeeds very close to the GTX 680.

At the same time this is why we see the EVGA GTX 670 Superclocked struggle to separate itself from the reference GTX 670, in spite of a 6%+ factory overclock. Too much of the time it’s simply not boosting much higher than the reference GTX 670, which limits the performance gains. With GPU Boost in effect this means there are a range of cards and we could be looking at a particularly good reference GTX 680, but whether that’s the case or not the end result is that EVGA’s card can’t do too much amidst the 141W power target limit. 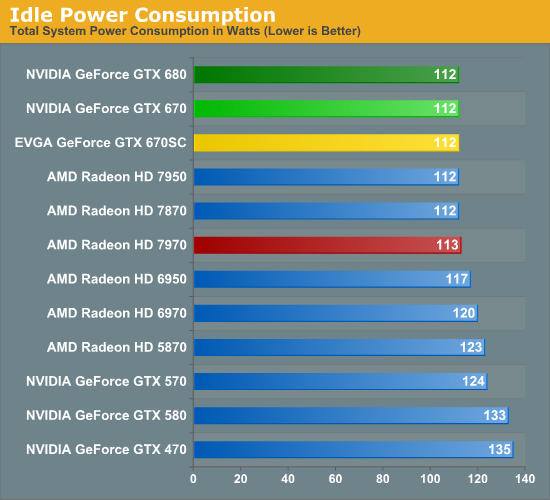 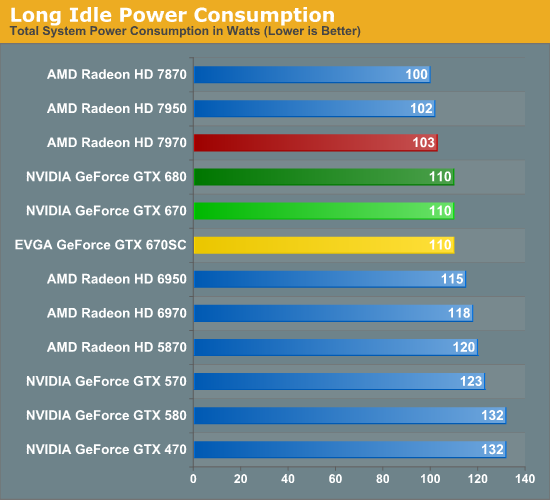 Starting with idle power, there aren’t any major surprised compared to the GTX 680. NVIDIA and AMD have both done such a good job managing their idle power consumption that even with the disabled SMX there’s no measurable difference between video cards. GTX 680 and GTX 670 effectively have the same idle and long idle power consumption. 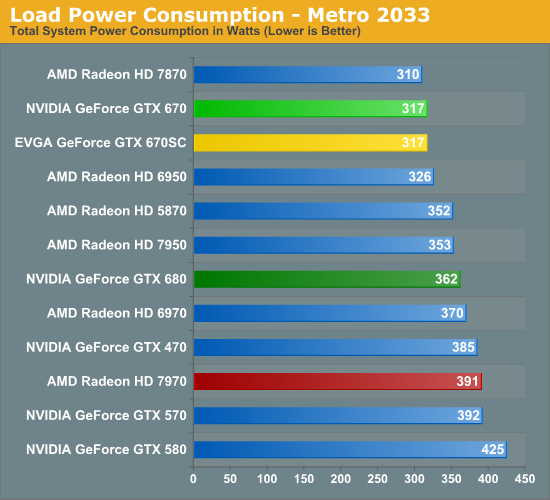 Moving on to load power consumption we can immediately see the GTX 670’s lower power target come into play. At 317W from the wall it’s 45W less than the GTX 680 for roughly 90% of the gaming performance, and this is in fact is lower power consumption than anything except the Radeon HD 7870. Even the GTX 560 Ti (which isn’t in this chart) is higher at 333W, reflecting the fact that GK104 is the true successor to GF114, and which would make GTX 670 the successor to GTX 560 from a design perspective. 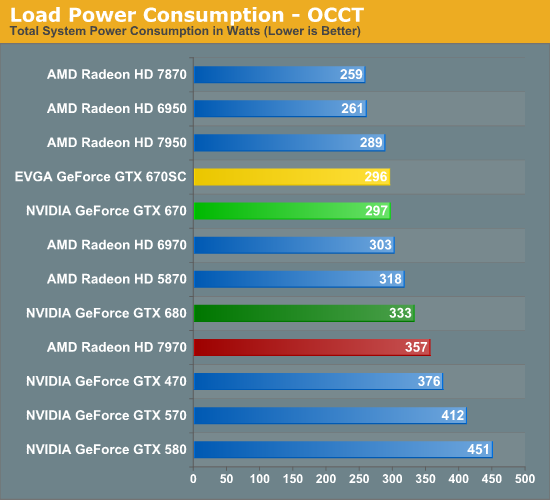 Relative power consumption shifts slightly under OCCT, but the story is otherwise similar. It’s not immediately clear why GTX 670’s power consumption is slightly higher than 7950 even after what we saw with Metro (PowerTune should be capping at 200W), but at least in this test the GTX 670 does end up doing a bit worse. On the other hand it’s still 60W less than the 7970.

Otherwise if we compare the GTX 670 to the GTX 680 we see that the GTX 680 ends up drawing 36W more at the wall, only a bit less than the difference we saw under Metro and quite close to what we’d expect based on the cards’ specifications.

On a related note, pay close attention to NVIDIA’s power target system in action here. In spite of the fact that the GTX 670SC is a binned part running at a lower voltage and higher clockspeeds, it’s drawing 1W less than the reference GTX 670. It would appear that NVIDIA has very good control over their power consumption overall, even if they can only adjust clocks for it a few times per second. 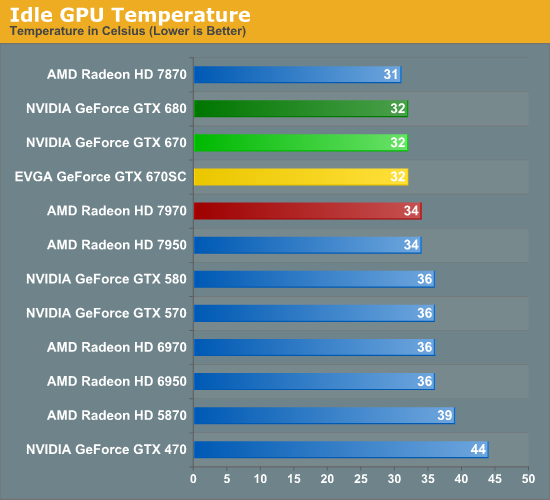 Seeing as how NVIDIA is using roughly the same cooler design with GTX 670 as they are with GTX 680 and they have the same idle power consumption, it should come as no surprise that temperatures are so similar. 32C is among the lowest of the temperatures we’ll see for a blower unless it’s running fast & loud. 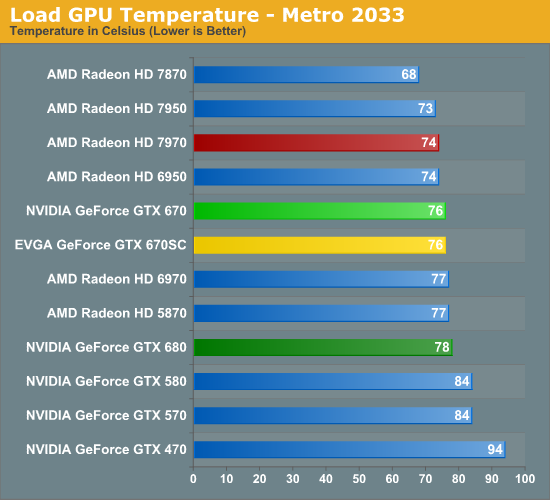 Thanks to the lower power consumption of the GTX 670 temperatures have gone down as well. 76C is still 2C warmer than the Radeon HD 7900 series due to AMD’s more aggressive cooler but it’s 2C cooler than the GTX 680. The thermal threshold for GK104 is 98C, which means there’s still over 20C of thermal headroom to play with here. 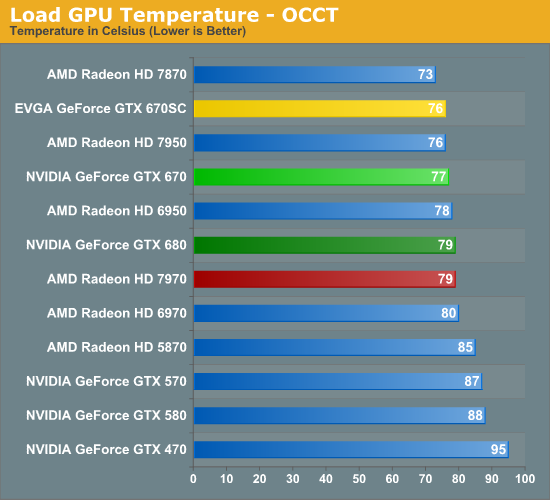 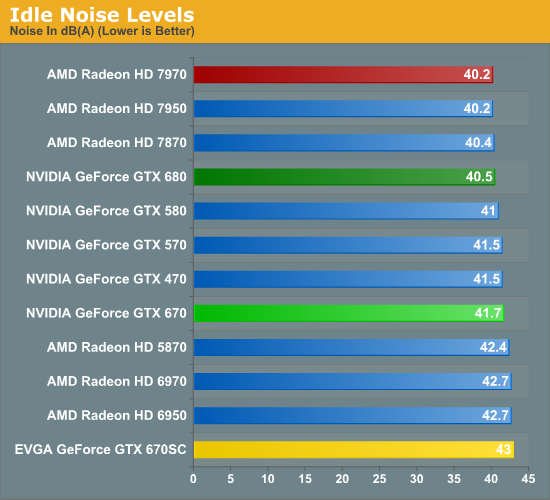 Unfortunately the impressiveness of the GTX 670 begins to wane some here at noise. NVIDIA tells us that the GTX 670 uses the same fan as the GTX 680 but this seems questionable. 41.7dB is not significantly louder than the GTX 680’s 40.5dB, but there’s a definite difference in pitch compared to the GTX 680. The GTX 670 seems to have a low pitch hum/grind to it that GTX 680 didn’t have.

Meanwhile EVGA’s card fares the worst here, at the precipice of falling out of the quiet zone. Since it’s using what’s fundamentally the same fan and cooler as the reference card, the only practical explanation is that EVGA’s smaller diameter fan intake has a negative impact on fan noise. 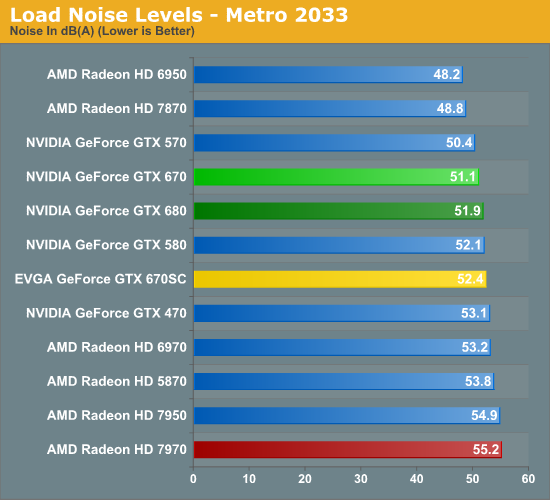 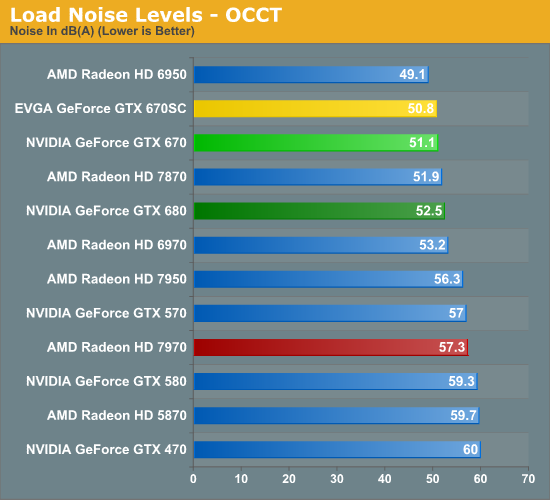 NVIDIA’s power target once more makes itself known here, thanks to which power consumption and thereby heat generation increases very little compared to what we saw under Metro. This widens the gap between the GTX 670 and 7900 series, which is now at 5.2dB and 6.2dB compared to the 7950 and 7970 respectively. Or compared to NVIDIA cards this is 1.4dB quieter than the GTX 680 and nearly 6dB quieter than the unthrottled GTX 570.

Meanwhile there’s something very interesting going on with the GTX 670SC that’s a wider reflection of the GTX 670’s reference fan. The fan speed went up but objective noise (A-weighted) went down. Why? That low-pitch hum we mentioned diminishes with a higher fan speed, and as a result the fan gets quieter once it passes a certain threshold. Subjectively we agree with our sound meter: the GTX 670SC sounds quieter here than it does as the lower fan speed it uses for cooling during Metro. We haven’t experienced anything like this with the GTX 680, which makes us further doubt that the fans are identical between the GTX 680 and GTX 670. Close no doubt, but not the same.

Wrapping things up this entire scenario is very similar to how we saw the launch of the GTX 680 play out. NVIDIA has a strong performing part with less noise and less power consumption than either its 500 series predecessors or AMD’s closest competition. This in turn was a big part of what made the GTX 680 so easy to recommend, as better performance with less noise is exactly the kind of direction we like to see video cards move in.