Shifting gears, as always our final set of benchmarks is a look at compute performance. As we have seen with GTX 680, GK104 appears to be significantly less balanced between rendering and compute performance than GF110 or GF114 were, and as a result compute performance suffers.  Cache and register file pressure in particular seem to give GK104 grief, which means that GK104 can still do well in certain scenarios, but falls well short in others. 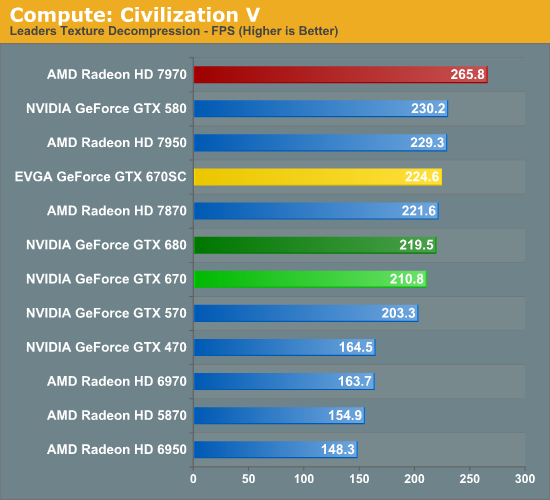 It’s quite shocking to see the GTX 670 do so well here. For sure it’s struggling relative to the Radeon HD 7900 series and the GTX 500 series, but compared to the GTX 680 it’s only trailing by 4%. This is a test that should cause the gap between the two cards to open up due to the lack of shader performance, but clearly that this not the case. Perhaps we’ve been underestimating the memory bandwidth needs of this test? If that’s the case, given AMD’s significant memory bandwidth advantage it certainly helps to cement the 7970’s lead. 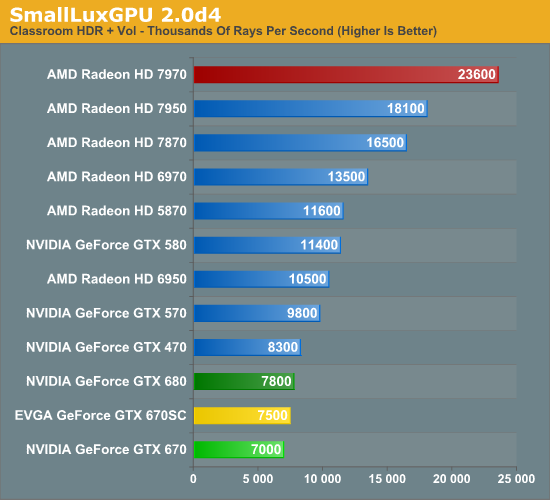 SmallLuxGPU on the other hand finally shows us that larger gap we’ve been expecting between the GTX 670 and GTX 680. The GTX 680’s larger number of SMXes and higher clockspeed cause the GTX 670 to fall behind by 10%, performing worse than the GTX 570 or even the GTX 470. More so than any other test, this is the test that drives home the point that GK104 isn’t a strong compute GPU while AMD offers nothing short of incredible compute performance. 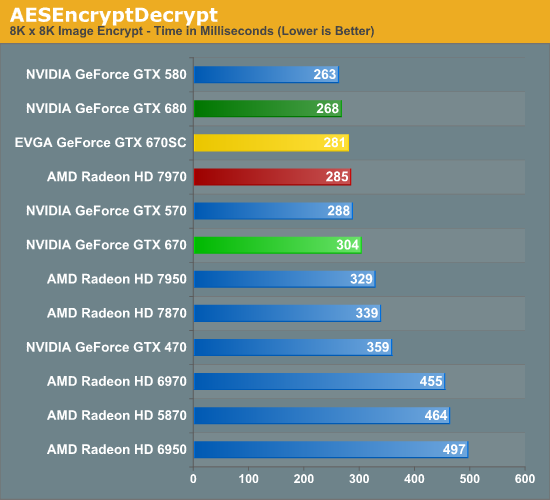 Once again the GTX 670 has a weak showing here, although not as bad as with SmallLuxGPU. Still, it’s enough to fall behind the GTX 570; but at least it’s enough to beat the 7950. Clockspeeds help as showcased by the EVGA GTX 670SC but nothing really makes up for the missing SMX.

Our foruth benchmark is once again looking at compute shader performance, this time through the Fluid simulation sample in the DirectX SDK. This program simulates the motion and interactions of a 16k particle fluid using a compute shader, with a choice of several different algorithms. In this case we’re using an (O)n^2 nearest neighbor method that is optimized by using shared memory to cache data. 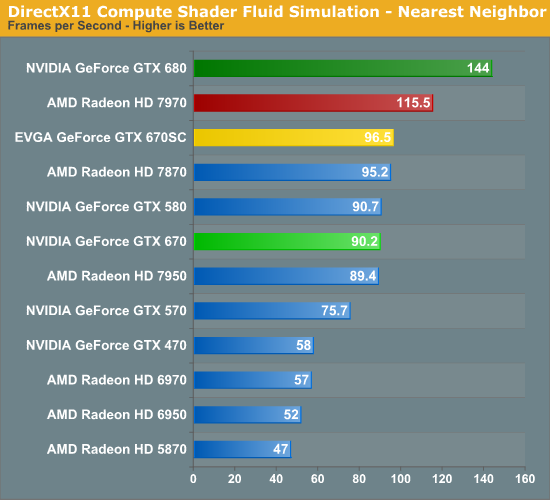 For reasons we’ve yet to determine, this benchmark strongly dislikes GTX 670 in particular. There doesn’t seem to be a performance regression in NVIDIA’s drivers, and there’s not an incredible gap due to TDP, it just struggles on the GTX 670. As a result performance of the GTC 670 only hits 42% of the GTX 680, which is well below what the GTX 670 should theoretically be getting. Barring some kind of esoteric reaction between this program and the unbalanced GPC a driver issue is still the most likely culprit, but it looks to only affect the GTX 670.

Finally, we’re adding one last benchmark to our compute run. NVIDIA  and the Folding@Home group have sent over a benchmarkable version of the client with preliminary optimizations for GK104. Folding@Home and similar initiatives are still one of the most popular consumer compute workloads, so it’s something NVIDIA wants their GPUs to do well at. 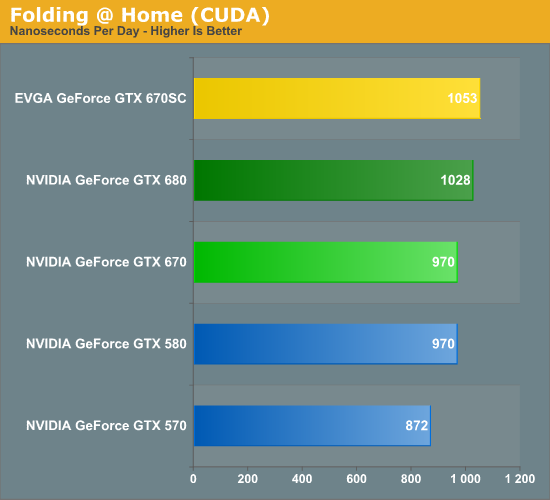 Whenever NVIDIA sends over a benchmark you can expect they have good reason to, and this is certainly the case for Folding@Home. GK104 is still a slouch given its resources compared to GF110, but at least it can surpass the GTX 580. At 970 nanoseconds per day the GTX 670 can tie the GTX 580, while the GTX 680 can pull ahead by 6%. Interestingly this benchmark appears to be far more constrained by clockspeed than the number of shaders, as the EVGA GTX 670SC outperforms the GTX 680 thanks to its 1188MHz boost clock, which it manages to stick to the entire time.