PCMark 7's secondary storage benchmark does little to show us differences between modern, high-performance SSDs as everything here scores within 5% of one another - but that's the point. For most mainstream client uses you'd be hard pressed to tell the difference between two good 6Gbps SSDs. Worry more about cost and reliability than outright performance if you're considering an SSD for a normal machine. Anything you see here will be much faster than a mechanical drive. 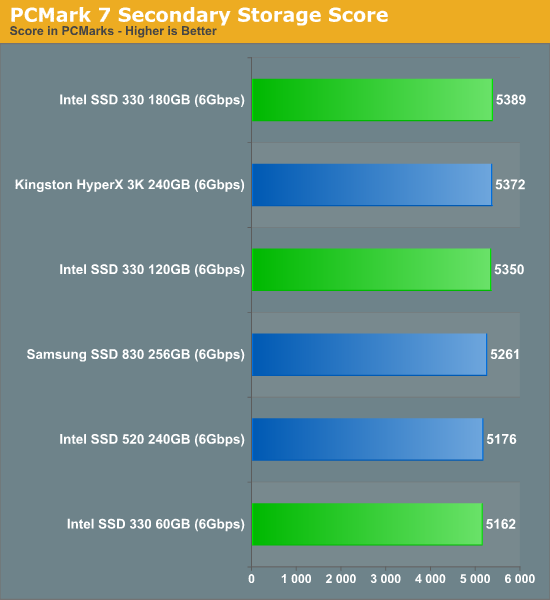 SandForce's controllers have always behaved poorly if you pushed them into their worst case scenario. Should you fill a SF-2281 based drive completely with incompressible data then continue to write to the drive with more incompressible data (overwriting some of what you've already written) to fill up the spare area you'll back the controller into a corner that it can't get out of, even with TRIM. It's not a terribly realistic situation since anyone using an SF-2281 SSD as a boot drive will at least have Windows (or some other easily compressible OS) installed, and it's fairly likely that you'll have other things stored on your SSD in addition to large movies/photos. Regardless, it's a corner case that we do have to pay attention to.

This is really the biggest problem with SandForce drives. If you're primarily storing large amounts of incompressible data, sequential write speeds suffer even further over the long haul.