We've mentioned time and time again that NAND endurance is a non-issue for desktop (and even some enterprise) workloads.

Intel doesn't quantify the difference in endurance between the NAND used on the SSD 330 and the 520, it simply states that the 330's NAND will deliver a useful lifespan of 3 years and thus carries a 3 year warranty. Unfortunately, without access to the E2/E3/E4 counters we can't quickly figure out how long the 330 would last given a typical client workload. Thankfully Intel left one SMART wear indicator intact: the E9 attribute, otherwise known as the Media Wearout Indicator.

The normalized value of the E9 attribute (accessible via any SMART monitoring software, or Intel's SSD Toolbox) starts at 100 and decreases, linearly by integer increments, down to 0. Its meaning? The number of cycles the NAND media has undergone. At 100, your NAND is running at roughly full health. At 90, you've exhausted 10% of your NAND's lifespan. By the time the E9/MWI attribute gets down to 1 (99% of NAND p/e cycles have been used up) the counter stops decrementing and you're recommended to replace the drive. Even Intel admits however it's quite likely that at a value of 1 your drive will last for a considerable amount of time.

These are SandForce drives that implement real time data deduplication/compression so I wanted to create the worst case scenario to see how big of a deal this lower endurance NAND would be. I filled the 60GB Intel SSD 330 with incompressible data, leaving only its spare area untouched. I then ran a 4KB random write test, at a queue depth of 32, using incompressible data in four blocks of 6 hours, stopping only to look at the state of the E9/MWI attribute. 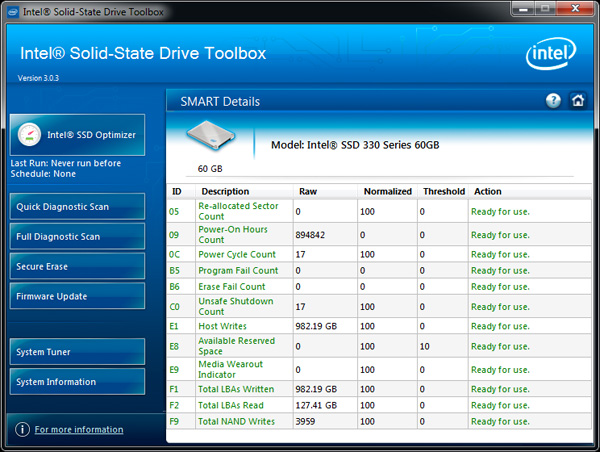 Not satisfied with these results I went in for another 24 hour round. By the end of it I had written 7629GB to the 60GB drive, at around 119 p/e cycles per NAND cell (assuming perfect wear leveling). The MWI hadn't budged: 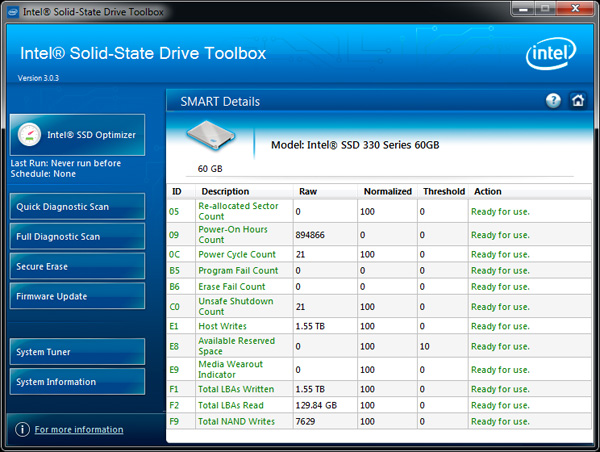 Extrapolating based on this data you'd end up with over 10,000 p/e cycles for this particular drive. Whether or not this is accurate remains to be seen, but endurance is clearly not going to be an issue with Intel's SSD 330.

If you assume a typical client drive sees 10GB of writes per day, within a year you'd write 3650GB to the drive. I wrote that much in 24 hours. In fact, I wrote more than two years worth of data to the 60GB Intel SSD 330 in two days. All the while the Intel SSD 330 didn't even blink.

Note that as with any form of binning, you will see examples of drives that do better or worse than the one I've tested. Unless there's something horribly wrong with Intel's 25nm NAND process however, the difference is unlikely to be large enough where it'd be an issue.

As a side benefit to all of this experimenting with death is we can actually quantify write amplification on a SandForce drive.

Intel's 300i firmware, like all SandForce firmware, keeps track of NAND vs. host writes. Using that data I'm able to quantify write amplification during this fairly worst-case scenario workload: