We’ve run a larger than normal set of games this time around. We’ll start with our current 2012 gaming suite, which we’ve discussed previously. The goal of our 2012 game tests is to get reasonable quality rather than bare minimum quality, so we’ve set the bar at around medium detail for our Value settings and high detail for our Mainstream settings. Along with the 2012 suite, we also ran all of the gaming tests from our 2011 suite at our medium detail settings.

We won’t provide a complete list of results here, but you can find those in Mobile Bench (including Mainstream and Enthusiast performance results, though not surprisingly HD 4000 falls well short of playability at those settings). What we will do is show how HD 4000 compares to HD 3000, HD 6620G (Llano A8), HD 6630M, and GT 640M. 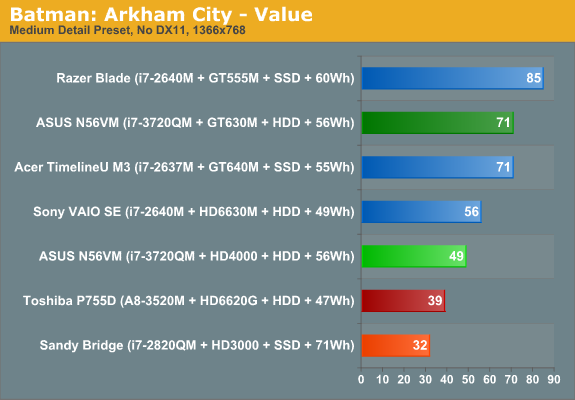 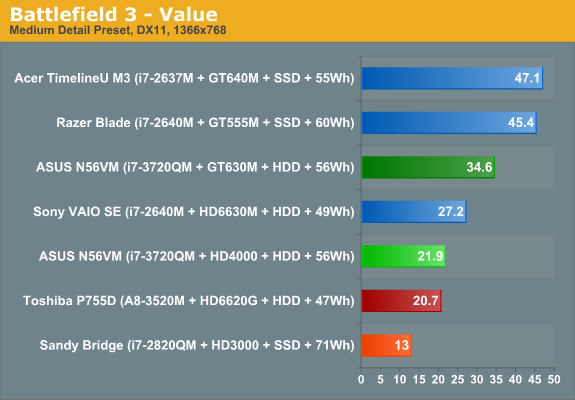 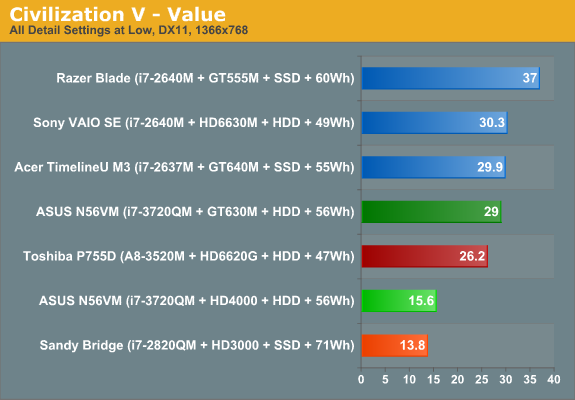 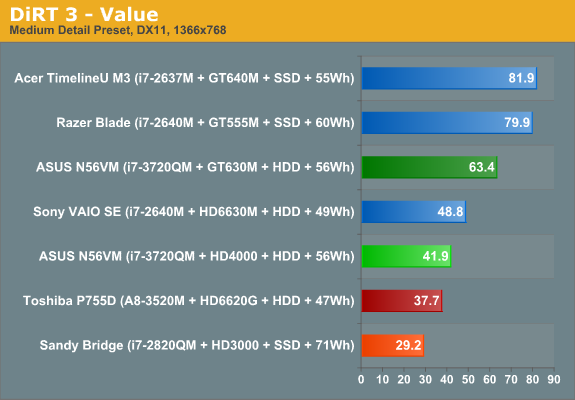 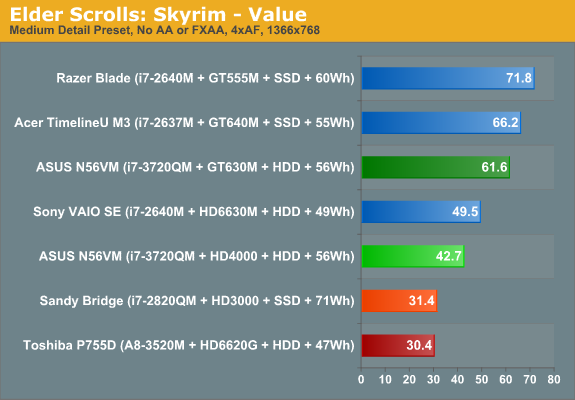 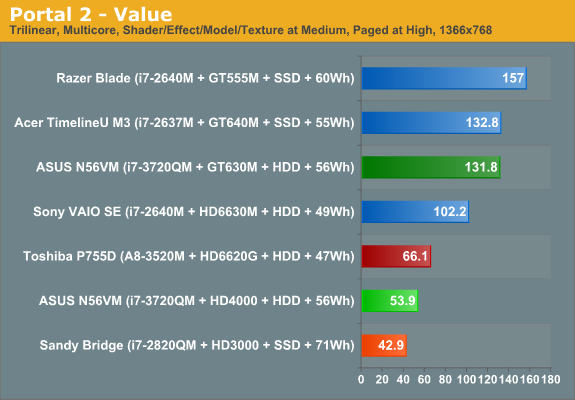 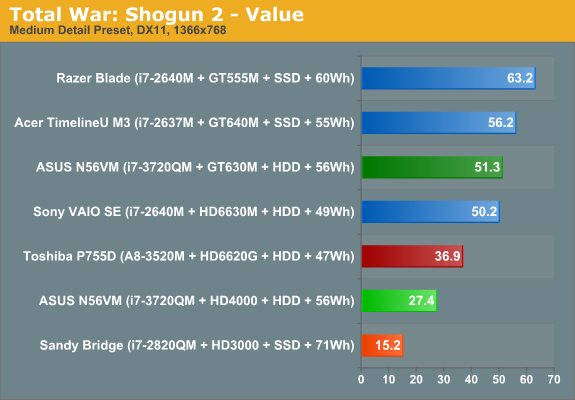 We don’t have a huge selection of laptop hardware (yet) for our 2012 gaming suite, and Ivy Bridge tends to place near the bottom of the Value gaming charts, but that’s only part of the story. Of the seven games we’ve selected for our current tests, two fail to deliver acceptable frame rates: Battlefield 3 and Civilization V. Civ5 is actually still playable at low frame rates, since it’s not a real-time game, but all things considered we’d still like to see >30 FPS. Battlefield 3 on the other hand is simply a beast—notice that Llano A8 along with Sony’s VAIO SE and Z2 with discrete GPUs all fail to break 30 FPS. If you’re into the multiplayer element of BF3, you’d really want a faster GPU; we’d suggest NVIDIA’s GT 555M or AMD’s HD 6730M as a more reasonable target to handle BF3 at our Value (medium) settings.

The remaining games all run acceptably, with the only possible exception being Portal 2. Many times during the game, when you’re looking through a portal the frame rate takes a substantial hit. This is something you’ll see to a lesser extent on other GPUs, but those GPUs already average well over 60 FPS so a 15-20 FPS drop isn’t that noticeable. HD 4000 unfortunately can drop below 30 FPS on some Portal 2 levels, which means despite the moderately high average frame rate it’s sometimes borderline unplayable. If you'd like to read more discussion of HD 4000 gaming potential, we'd also point you at Ryan's dissection of Ivy Bridge graphics performance on the desktop.

If we skip comparisons with all the faster discrete GPUs, things become quite a bit more interesting. We’re looking at fifteen games from the past two or three years, all run at medium detail 1366x768 settings. (Note that the benchmark we use in the above chart for Left 4 Dead 2 differs from our previous tests, as Valve broke backwards compatibility for their timedemo about five months back.) Comparing Sandy Bridge and Ivy Bridge, HD 4000 ends up being nearly 50% faster than HD 3000 on average. The only title in our suite that doesn’t see a substantial boost in performance is Civilization V.

We’ve speculated in the past that the problem is with Intel’s shader and/or geometry throughput, which might also explain the slowdowns we see in other titles (e.g. Portal 2 and Left 4 Dead 2 both suffer from frame rate dips in Intel’s IGPs). In a similar story, enabling tessellation in Deus Ex: Human Revolution absolutely killed frame rates on HD 4000—it’s perfectly playable with most of the quality settings enabled, but turn on tessellation and the frame rates plummet to less than half. Hopefully, Haswell’s IGP will get the geometry and shader processing capabilities it needs to push the rumored 40 EUs on the fastest chips. Still, Intel has really stepped up their commitment to graphics performance over the past several generations. That’s best illustrated by a comparison with the only other major IGP, AMD’s Llano:

We used two different sets of results for the above chart, one from the original Llano A8-3500M laptop AMD shipped us (for the 2011 games) and the second is the Toshiba Satellite P755D with A8-3520M. Red bars indicate games where AMD wins, green bars are for Intel wins, and blue bars are for ties (the two score within 10% of each other—100% being identical performance). Gathering all the gaming results together, what we end up with is Intel’s HD 4000 offering a very similar experience to Llano A8 in overall gaming capability. On the desktop, Llano continues to enjoy a fairly sizeable lead over Ivy Bridge, but on laptops with much lower TDPs it's a different story.

There are some titles where AMD pulls off substantial wins (Civ5, DiRT2, Portal 2, and Total War: Shogun 2), and several titles where Intel takes a similarly large lead (Batman, DiRT 3, Left 4 Dead 2, and Skyrim). Neither platform will handle medium detail settings at 1366x768 for every game out there, but they’re both generally fast enough to handle most games. Here are the details numbers:

Granted, the A8-3500M/3520M aren't the fastest Llano parts, and the Llano systems we tested were both using DDR3-1333 memory. Give Llano an MX part and faster memory and performance should improve around 20% (5-10% for the RAM, and 10-15% for the CPU). Outside of a few titles, however, both solutions are playable on most of the same subset of games. And yes, we know AMD has Trinity coming out that should improve on Llano’s GPU performance; AMD has suggested it will be around 50% faster, but we can’t comment on Trinity performance right now—check back in a few weeks.

Of course, there’s another question that always comes up when we look at Intel’s IGP: driver quality. When Sandy Bridge launched we did a similar investigation and found that there were minor to moderate problems in four of the twenty games we tested. We trimmed our list down to 15 titles this time out, and if we only look at games where there was clearly some sort of driver problem we have two failures. The first isn’t quite as serious: StarCraft II appears to have a memory leak with the current HD 4000 drivers, as it ends up using nearly 4GB of RAM after 10 to 15 minutes of play before crashing to desktop. (I had this happen in a Versus AI match three out of three times in testing.) Prior to running out of memory, however, performance is generally playable, and HD 3000 doesn’t appear to have the same problem.

The second problem title is Battlefield 3; almost everything renderers properly, but the overlay of text (e.g. subtitles and some HUD elements) didn’t work for me, and navigating the menu also didn’t work properly in fullscreen mode—the mouse wouldn’t register on any of the buttons, so I had to switch to windowed mode, click on the menu settings I wanted to change (e.g. click on “Video” and then change the resolution and quality settings), apply, and then switch back to fullscreen mode. What’s more, BF3 would also lose the menu system entirely after loading a level, typically requiring a restart to bring it back. Performance is acceptable at minimum detail settings, but until the overlay/menu issues get sorted out BF3 isn’t what I would deem playable. (Note that I also experienced the same overlay/menu issues on HD 3000, so this appears to be a driver bug with Intel’s latest 8.15.10.2696 drivers.) I've uploaded a YouTube video showing the bug as well as how things should work.

[Update, 4/28/2012: It's not clear what the precise cause of the Battlefield 3 glitch was, but a 1.5GB patch just got pushed live via Origin some time in the past few days. With the patch in place and running the same Intel drivers, the bugs observed above are no longer present. Performance is still sub-30FPS, but for the single-player campaign you could probably manage in a pinch.]

Looking at the big picture, Ivy Bridge is still a very large step forward for Intel’s graphics division. You’ll note that I didn’t provide any examples of DX11 not working properly in recent games; that’s because as far as I can tell all the DX11 titles I tried rendered correctly. I’m sure there are other exceptions out there, but besides the above fifteen titles I also briefly loaded and played an additional eight games and found they all rendered properly in brief testing.

If you’re interested, the list of additional games I tried includes Rage, Super Street Fighter IV: Arcade Edition, Deus Ex: Human Revolution, Duke Nukem Forever, Dungeon Siege III, Far Cry 2, Just Cause 2, and The Witcher 2. Of these, only The Witcher 2 struggled to reach playable frame rates; even at minimum detail settings, in-game frame rates were typically in the high teens, though The Witcher 2 tends to perform poorly on NVIDIA and AMD mainstream mobile GPUs as well—it’s a bit of a graphics pig. So that brings the total number of games I tried on Ivy Bridge to 23, with only one game showing clear rendering issues, and a second experiencing periodic instability due to a memory leak. While not perfect, it’s another healthy step in the right direction.