ioSafe holds a number of patents related to disaster proofing of digital storage media. ioSafe's CEO Robb Moore is the primary inventor of most of those patents. In this section, we will take a brief look at the various patents related to the ioSafe SoloPRO. Note that the SoloPRO might not be using all of the inventions mentioned in the patents below.

This patent provides details of how ioSafe is able to design a fireproof enclosure despite the presence of a fan to cool the operating contents. Even though a single hard disk drive used as a backup target (such as in the SoloPRO) might not require active cooling, it is definitely a necessity in multi-disk configurations.

The invention presents a fireproof enclosure with an inlet for air to flow through (aided by a fan) and cool the storage device inside. However, this inlet could prove detrimental in case of a fire (where the exposure of the internal storage device to high temperatures / fire through the inlet could cause its destruction).

To solve this problem, the opening is protected by a fire resistant movable hatch. This movable hatch automatically closes upon reaching a predetermined temperature (which is something not reached by the drives during operation, and also below something which can actually damage the drives). The closing mechanism could use any temperature sensitive element (eutectic metal / plastic / rubber / wax etc.) coupled with either actuation springs that expand or contract to close the hatch or just rely on gravity to bring the hatch down (if the temperature sensitive element is actually supporting the top of the enclosure). An alternative to a mechanical closing system is an electronic solenoid based system where the actuator is a thermocouple. 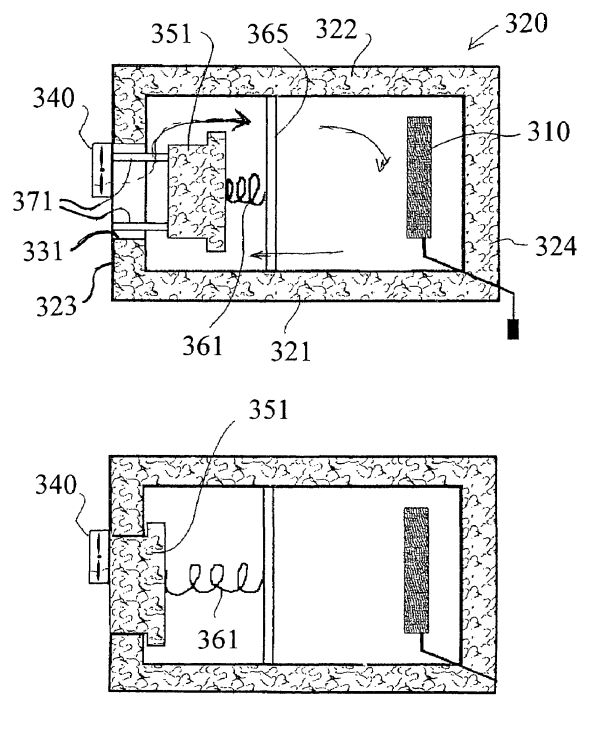 Example of springs being used as actuators to close hatch held in place by a temperature sensitive element (Diagrams from Patent No. US 7,211,742 B2). Note that this is not the actual mechanism used in the SoloPRO.

In each of the above methods, a temperature sensitive element is activated when a threshold temperature is reached, which protects the internal data storage device from the high external temperature.

Fire Resistant and/or Water Resistant Enclosure for Operable Computer Digital Data Storage Device (US Patent No. US 2009/0050365 A1):

The movable hatches described in the previous patent tend to increase the cost of the device. In this patent, ioSafe describes how a 1.5 inch thick gypsum wall with small sized vents could support fan-based cooling while also protecting the internal contents from the high temperatures outside. In the presence of a fire, the air inside expands and gets forced out through the vents. This outward air flow counteracts the flow of external heat through the vents. The vents are designed to be maze-like to reduce the amount of external heat which can get inside. Of course, the inner chamber and the vents have to be appropriately sized to provide fire resistance and prevent data loss. 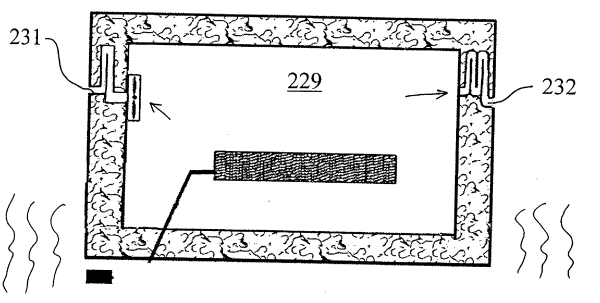 Labyrinthine vents to allow for expanding internal air volume to counter the external heat (Diagram from Patent No. US 2009/0050365 A1) 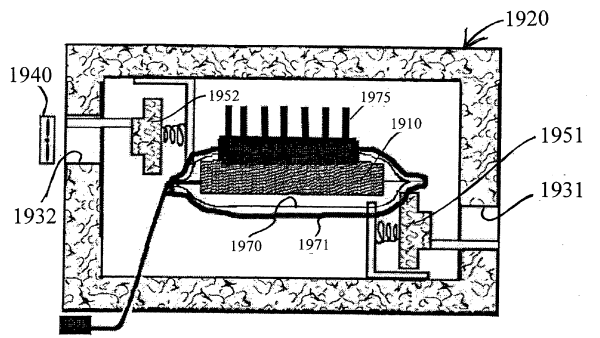 The water resistant pouch is made of heat conducting material so that the heat produced by the drive is taken away. It could be either a metallic foil or a more rigid enclosure. The enclosure could also internally contain fins for better thermal performance. The metallic pouch is provided with an elastomeric coating. A gasket around the perimeter of the pouch provides a water resistant enclosure.

Fire Resistant and Water Resistant Enclosure for Operable Computer Digital Data Storage Device (US Patent No. US 7,843,689 B2):

This patent is the one on which a majority of the features of the SoloPRO are based. It improves upon the inventions detailed in the previous two patents by: 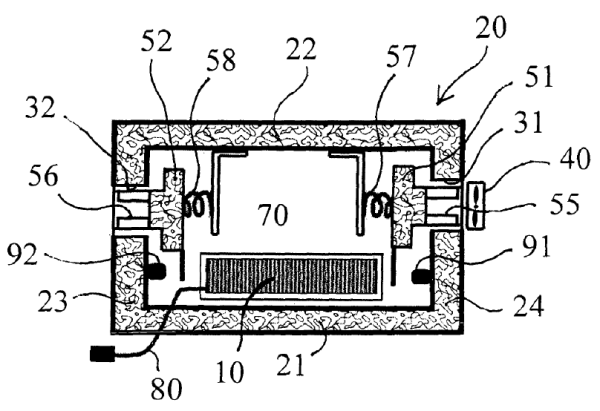 State of the enclosure prior to fire exposure. Note the size of the vents near 91 and 92 which allow for flowing air to cool the storage media during normal operation (Diagram from Patent No. US 7,843,689 B2)

State of the enclosure after fire damage. Note that the size of the vents near 91 and 92 have decreased, but they still allow steam built up internally to escape outside (Diagram from Patent No. US 7,843,689 B2)

The water resistant pouch used in this invention is similar to the one in the previously described patent.