Last week Ryan and I had a meeting with Offir Remez, Co-Founder, President and Vice President of Business Development at Lucid. It went on a while, as Offir described Lucid and we peppered him with questions. There are several points worth mentioning about the functionality of Virtu MVP, which Offir was happy to share with us so we could share with you.

The first, to reiterate, is that Virtu requires a system with an integrated GPU (iGPU, such as a mainstream Intel Sandy/Ivy Bridge processor or an AMD APU) as well as discrete graphics (dGPU, AMD or NVIDIA). Without this setup, Virtu will not do anything. This also means that both the drivers for the iGPU and dGPU have to be installed at the same time. Lucid have validated the several previous generations of discrete cards (AMD 5xxx and above, NVIDIA 4xx and above), but are keen to stress that the technology should work with any card, including 8800 and 2400 series—they don’t have the time to validate every configuration being the point here.

In terms of how Virtu functions, it is important to understand the concept of being able to perform what was mentioned on the previous page—being able to manipulate what the GPU does and what it does not do. The underlying technology of Virtu is that the environment is virtualized. This means that instead of the GPUs working on top of the operating system, Virtu adds in a middle layer between the operating system and the GPU. This way, Virtu can manipulate everything that the operating system wants to say to the GPU, and vice versa, without either of them knowing that there is a middleware layer.

The second is most important perhaps, which I will go into later. Virtual V-Sync and HyperFormance will only make a difference in the following circumstances:

a) You suffer from visual tearing in your games, or you actively use V-Sync
b) If your setup (screen resolution and graphics settings) perform better than your refresh rate of your monitor (essentially 60 FPS for most people). If you have less than this, then you will probably not see any benefit.

I should mention some terminology. Virtu works in two modes, i-Mode and d-Mode, depending on if the display is connected to the integrated graphics or discrete graphics: 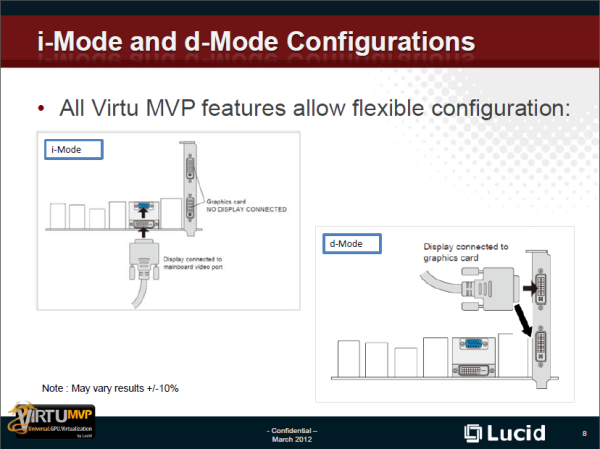 Let us go over the technologies again quickly.

Virtual V-Sync: Making sure the last fully rendered frame is shown, without tying the CPU, display and input down to 60 Hz (or the refresh rate of your display) and increasing responsiveness.

Virtual V-Sync works by making the integrated GPU probe the rendering buffer on the discrete card. In i-Mode, it transfers the last completed frame that the GPU has processed into the iGPU, and then when the display requires a refresh, it can process that entire frame. This results in no tearing, and the latest frame being shown. This means that Virtual V-Sync only works when your frame rate is greater than the refresh rate—if it is worse, then Virtual V-Sync will show stuttering in the periods where the next frame is not complete in time, thus it shows an old frame.

To reiterate, Virtual V-Sync will only work if your frame rate is greater than your refresh rate, usually 60 FPS. It does not increase frame rates, but removes tearing while keeping the responsiveness of the input system (mouse) better than normal V-Sync.

HyperFormance: Predicting which frames (or rendering tasks) will never be shown and taking them out of the pipeline so the GPU can work on what is needed (which also increases input responsiveness).

HyperFormance is a tool that uses the iGPU to examine rendering tasks. It applies a prediction algorithm to calculate how long the next few frames will take to render. If the refresh rate of the monitor means that the next two frames have no chance of being shown, then HyperFormance removes all applicable rendering tasks for those frames. Some rendering tasks still need to be processed (certain features like smoke or iterative algorithms), however a lot can be nullified. It then does the predictive algorithm and probe again; when it finds a frame which needs to be rendered for the refresh rate, it will make sure all rendering tasks are done on the GPU.

As the FPS counter is increased at the beginning of a frame, this makes it look like the FPS has shot up as rendering tasks are removed. However, this is a poor indication of what the software does—it means that the responsiveness of the input peripherals (e.g. mouse) goes up in line with this ‘FPS’ number.

This means, HyperFormance increases responsiveness and makes FPS meaningless. In order to work, HyperFormance will only make a difference if your normal frame rate is greater than your refresh rate, usually 60 FPS.

Essentially, the FPS number you get from HyperFormance becomes a measure of system responsiveness, not GPU output.

If the prediction algorithm for HyperFormance is wrong and a frame takes longer to render than predicted, the system will show the last fully rendered frame, causing stuttering. Lucid have asked us to make clear that this should be reported to them as a bug, stating the system being used, settings, and version of Lucid MVP.

What you will see on a system

As the technologies are all based around a virtualization layer, there is a little overhead in processing. Information from the frame buffer has to be passed from the iGPU to the dGPU and vice versa over the PCIe bus. If your screen resolution is high (~2MP for 1920x1080, ~4.1 MP for 2560x1600), this means data transfer could potentially be limited by bandwidth, but it should not be at 5GBps. The virtualization layer actually adds in latency, per frame and per call.

For Virtual V-Sync, in i-Mode, frames need to be transferred between dGPU to iGPU, and then displayed through the iGPU. The latency for this, or so we are told, should be around 3% for high frame rates greater than 100 FPS, compared to that from d-Mode. d-Mode requires less overhead as frames do not need to be copied for display, but commands still have to go between the iGPU and dGPU.

For HyperFormance, in i-Mode, we still have to transfer frames to output on the integrated graphics. However, as the iGPU is also dealing with rendering calls for parts of the frame, this is the main transfer between the two graphics units. In d-Mode, we have a similar experience to Virtual V-Sync.

The upshot of how all this works comes in the form of several numbers and a feature, depending on which settings you choose. The table below shows a theoretical result of what you can expect to get with these technologies in d-Mode mode. Here we are going with Lucid’s standard predictions—Virtual V-Sync and HyperFormance causing a 3% reduction in frame rates above 60 FPS, Virtual V-Sync removing tearing and utilizing more of the GPU, and HyperFormance removing 30% of rendering tasks.

As you can see, both Virtual V-Sync and HyperFormance are designed to work together, but are available in the software as separate options. This is, as we found out, because there may be the odd setup that does not like a particular game/setting, or that it changes the feel of a game too much to what the user is used to. Thus, Lucid allows users to chop and change with whatever feels good to them.

The ultimate realization is this—the FPS counter shown in games when using Virtu MVP no longer means the true FPS value of the output of your GPU. The FPS counter is now a measure of responsiveness. So please be wary when reading reviews using this technology and of the analysis of the results—the refresh rate of the monitor is also a vital component of the results.

Caveats of the Technology

There are a few bumps in the road, as expected with anything new, and we put these to Lucid for answers. The first is the possibility of stuttering as mentioned above when the prediction algorithm cannot cope with a massively different frame to previous—Lucid has asked us to reiterate that this should be reported as a bug.

In terms of multiple GPU users, Lucid says they are not specifically designing the software for them. However, they have said that multiple GPU users are more than welcome to assign Virtu MVP to their games to see if it works—Lucid just will not be validating multi-GPU scenarios due to the additional QA required.

There are currently three main titles as of today that Lucid are still fine-tuning for HyperFormance—Crysis 2, Lost Planet 2, and most importantly, Battlefield 3. These games are currently not validated as they are experiencing stuttering, which Lucid hopes to fix. This is more than likely related to the way the software interprets the rendering calls and the adaptive prediction algorithm specifically for these titles.

In addition, as graphics cards become more powerful, HyperFormance obviously will increase, surpassing the responsiveness of the input system. Thus running a 7970 with an old DX9 game at 1024x768 may make your FPS hit 1500+, but your responsiveness will be limited by the system.

On paper, Virtu MVP sounds like a great technology to have if you are a gamer demanding a more responsive system for 'immersive' gameplay. If Lucid can make Virtu MVP live up to the software’s lofty goals (and not be dogged by new game releases), it sounds good. Arguably, the best place to see this technology would be with upcoming consoles. If it is integrated into the console, and part of the validation of future games is that is has to run with Lucid, it could mean a lot cleaner and more responsive gameplay.

So much for the new technologies; what about the motherboards themselves? In this preview (we will come back at a later date with Ivy Bridge performance numbers), we aim to cover as many boards as possible to give you an idea of what is available on the market. Up first is the ASRock Z77 Extreme4.