Performance on Windows Phone 7.5 at the moment tops out at almost the same place for virtually every handset. As I touched on before, the platform is still a Qualcomm-only party, and the name of the game is single core 45nm Snapdragon with Adreno 205 at the high end in the form of either MSM8x55, or for the Lumia 900 APQ8055 at 1.4 GHz.

I’ve already penned some thoughts on WP7’s current chassis spec, and in the future the specification will open up with the Tango update (which we’ve seen in the Lumia 610) to a lower-end configuration with MSM7x30 or MSM7x27A. Eventually Windows Phone will move onto dual core SoCs and possibly more vendors, but when and how that happens remains to be seen. The driving factors will undoubtably be both performance, but also improvements to things around the edges like 1080p video encode, decode, and power gains from a 28nm process geometry.

For now however let’s focus on the Lumia 900, which again is 1.4 GHz APQ8055 with 512 MB of LPDDR2. Benchmarking WP7.5 still is a pretty basic thing, since platform consistency somewhat obviates the need for many of the other big cross-platform benchmarks (this will change with Windows 8, however). For now that means our testing is limited primarily to assessing javascript performance with sunspider, browsermark, and WP Bench. 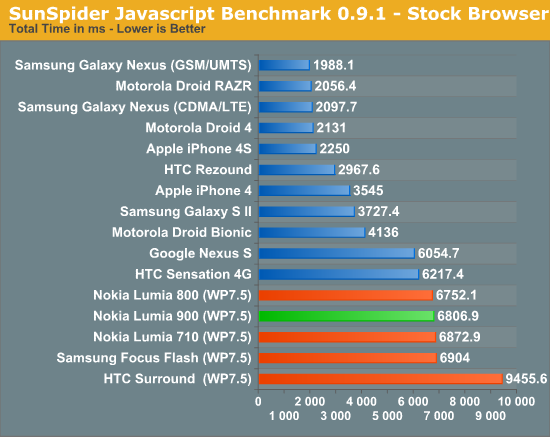 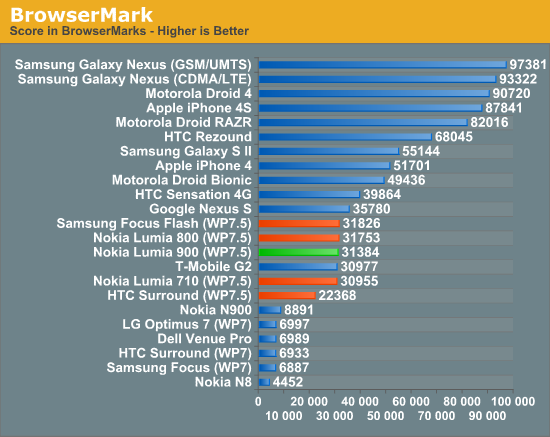 At this point all the most modern WP7 devices are still shipping with essentially the same SoC - 1.4 GHz 45nm MSM8x55/APQ8055. For comparison, the initial launch devices were 65nm QSD8x50 at 1 GHz. With the Tango update performance differences will start to be more of a thing for consumers to care about as it becomes possible to select a phone with a lower end SoC that still runs the Windows Phone UI at a decent clip (like the Lumia 610 we’ve handled). As a result, it isn't surprising at all to see the WP7.5 devices with the same exact SoC all clumped together and performing basically the same. In addition, though the WP7.5 IE JavaScript engine (Chakra) is a huge improvement upon the WP7 JScript engine, it still lags behind the competition on Android and iOS.