The Coppermine128 is manufactured by essentially taking a regular Pentium III based on the Coppermine core and disabling half of the L2 cache.  This can be verified by looking at the die sizes for both the Coppermine128-based Celerons and the Coppermine Pentium IIIs (they are equal).  The reason Intel does this is because there is no guarantee that when they produce a Pentium III with 256KB of L2 cache on-die that all of that 256KB L2 will be functional and fit for sale as a part of a processor.  In the event that some of the 256KB L2 fails the required production tests, Intel can simply disable 1/2 of the L2 and re-label the part as a Celeron after changing the clock speed and FSB pins of the CPU. 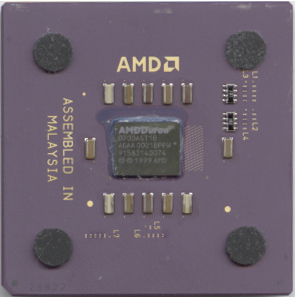 Now AMD goes about this problem in an entirely different way.  They simply duplicate the number of L2 cache columns and if there is a particular block that fails production tests then AMD can simply disable the entire column.  It is because of this that the Thunderbird and Duron are actually two different dies.

Combined with the fact that the Celeron is still limited by the 66MHz FSB and its 66MHz memory bus and you have a part that is significantly slower than an equivalently clocked Pentium III, Athlon, Duron or Thunderbird.


* Note: The K75 core actually took over the entire Athlon line and was available in 500 - 750MHz versions as well although it launched at 750MHz. The Thunderbird, although officially launched at 750MHz is available at speeds lower than 750MHz but only as OEM parts.
Index The Celeron's Limitations
Tweet
PRINT THIS ARTICLE
POST A COMMENT