Last week I did a quick preview article showing some initial battery life results for Windows 8 Consumer Preview. What started as just one set of results from one battery life test quickly ballooned into more in-depth testing, as the first results were rather shocking. Eventually, I added a second laptop to the list and started running additional tests on both laptops. Below you can see the full set of results, but let me preface the charts with some additional information that may help to explain any discrepancies between our results and those you might find elsewhere.

My initial test was done after performing an in-place upgrade to Windows 8 CP on a laptop that had been used on and off for the past year. The laptop was the original quad-core Sandy Bridge sample that Intel shipped out to various sites last year; to the best of my knowledge, the laptop was never actually sold at retail, though it’s similar to older Gateway NV7x models and sports a “Packard Bell” logo on the touchpad buttons. Quite a few games and applications had been installed (and uninstalled) during previous benchmarking, but I figured an in-place upgrade would be representative of what many will do. I had hoped to return and do a completely clean install as well, but that eventually proved unnecessary (and I didn’t have enough time). What I do know is that I ran the Internet Explorer 10 CP test three times on that initial upgrade, and outside of the first run (240 minutes), the other two results were virtually identical (262 and 263 minutes).

For some reason, doing an upgrade to Win8CP with a “well worn” installation of Windows 7 appears to have the potential to seriously impact battery life. After doing a clean install of Windows 7 and re-testing all battery life results (to ensure battery degradation wasn’t penalizing the Win8 scores relative to our original Win7 results), I then performed a second upgrade to Win8CP. This time, the results were far better on the IE10CP test, but other than installing all the drivers and Windows Updates, the only applications on the laptop outside of the standard Windows install are Chrome 17, 7-Zip, and a few other small apps like MPC-HC and VLC. So basically, the second Win8CP upgrade appears to be analogous to a clean install of Windows 8.

In order to have a second set of data, I did perform a completely clean install of Windows 8 CP on a second laptop, the ASUS K53E (which also came to us via Intel last year). I did a clean Windows 7 install on a 64GB Kingston V100 SSDNow, ran all our tests (again to verify that battery degradation isn’t playing a role), switched to a second V100 SSD and did a clean install of Windows 8 CP, and then ran all the tests again. Given the time constraints, I was not able to run all of the tests multiple times, so the margin of error is perhaps as much as 5%, but I did run several of the tests more than once and variation between runs was typically less than 1%. Note that the hardware used for the battery life testing is completely separate from all the other tests; below are the brief specs tables for the two test laptops:

With two laptops running clean installs of Windows 7 and Windows 8 Consumer Preview, I think it’s safe to say that our tests are representative of what you can expect from the current release. However, that doesn’t mean the results are what we can expect when Windows 8 finally ships. Drivers and optimizations from laptop manufacturers can certainly improve the results. Beyond the clean installs, to make sure that we’re doing an apples to apples comparison, I configured all of the power settings identically between the two OSes. We’re using the Power Saver profile, with the following settings (the one difference being the display brightness, which was calibrated to 100nits on both laptops—50% brightness on the K53E and 40% on the Compal):

The laptops being tested have been running battery life tests (or recharging) pretty much constantly for the past week, and I’ve only just completed the results for both OSes using one set of power settings. There are low-level differences between the Power Saver and Balanced profiles that can and will impact both performance and battery life. Previous testing has shown that Power Saver typically improves battery life by a few percent, even with all other settings identical, and the CPU performance appears to vary quite a bit depending on the workload. I also disabled Intel’s Display Power Saving Technology for both laptops in Windows 7 (I can’t seem to find a way to check this in Windows 8 right now); when enabled, DPST will adjust contrast and brightness to try and improve battery life, but there is a loss in image quality and it has the potential to introduce more variation between runs.

So with that out of the way, we now have a full suite of battery life results from Windows 7 and Windows 8 Consumer Preview. Again, the early nature of the OS and drivers mean that these results can and very likely will change by the time Windows 8 ships later this year. We could also look at using the Metro version of IE10CP on Windows 8, but that would entail tweaking our tests to get it to work so we’ll save that for another day. Here are the full details of our test settings/scripts:

Idle Battery Life: We start a timer that outputs the current time to a text file every minute, then unplug the laptop. WiFi is disabled and audio is muted for this test.

Heavy Web Browsing: We start a script that outputs the current time to a text file each minute, and it also launches the web browser, kills it after 55 seconds, and relaunches it 5 seconds later. We load up four web pages with Flash content (mostly advertisements) in the test browser—IE9, IE10CP, and Chrome 17 for this article. WiFi is enabled and audio is muted for this test.

H.264 Video: We use the same timer script as the idle test, but this time we launch a video player with an H.264 encoded HD video right after unplugging the laptop. We tested with Media Player Classic Home Cinema x64 (version 1.6.0.4014) and VLC (version 2.0.0). The video used for these tests is a 720p High profile 5.1 encode with a 5.56 Kbps video stream and 6-channel DTS 1.5 Kbps audio bitstream. We set the video player to loop, disable WiFi, unmute audio, plug in a set of headphones, and set the volume to 40%. 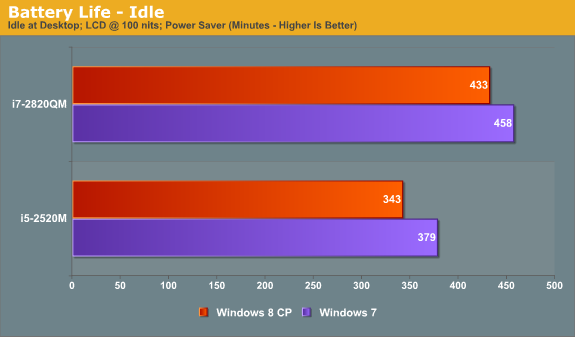 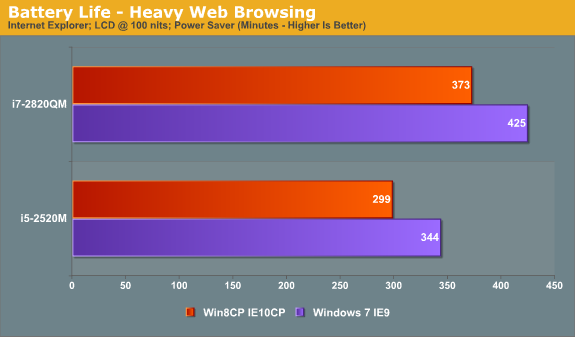 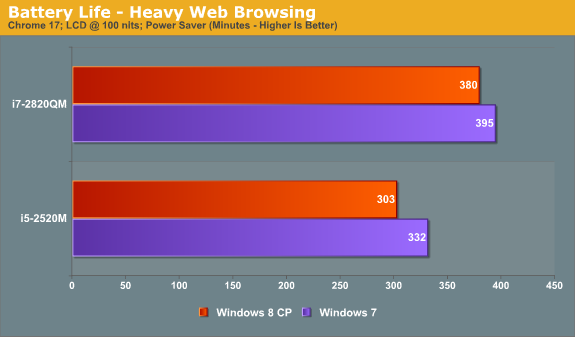 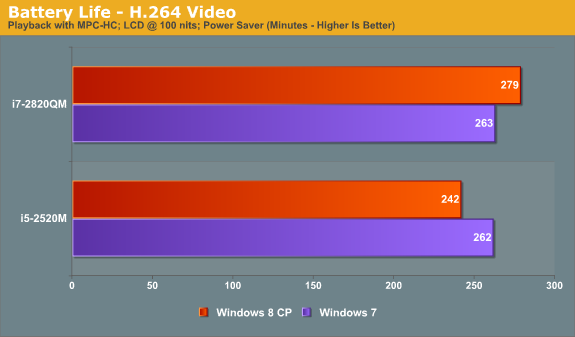 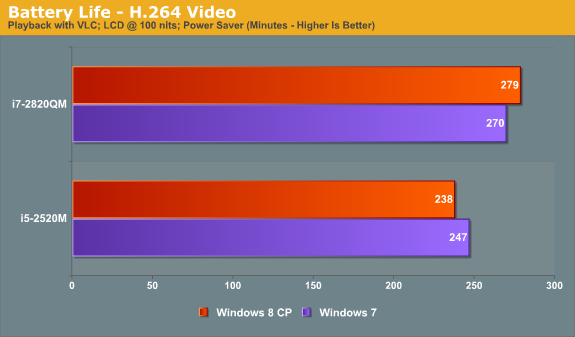 The overall results with our current test laptops have Windows 7 delivering better battery life in most instances. On the ASUS K53E, the advantage ranges from 4% in VLC to as much as 15% in Internet Explorer, but the comparison between IE9 and IE10CP could skew that result more than in other tests. Chrome 17 gives Win7 a 10% advantage, idle battery life is 10.5% better, and MPC-HC battery life is 8% better.

Switch to the Compal notebook and we actually get one discipline where Windows 8 CP comes out ahead: video playback. It’s not exactly clear why the quad-core laptop does better under Win8 in this area, but both VLC and MPC-HC last longer than on Win7—3% longer with VLC and 6% longer with MPC-HC. Elsewhere, however, the lead for Win7 over Win8CP continues. Idle battery life is 6% better, Chrome 17 is 4% better, and in IE9 vs. IE10CP Win7 leads by 14%.

Given that there’s always slight variation between battery life runs, anything less than 3% is probably nothing to worry about, especially considering the early nature of the Win8CP release. Microsoft could easily close the gap by the time the OS ships, and with additional optimizations Windows 8 could even take the lead in most of our benchmarks. Even a 15-20% deficit with IE10CP could disappear by the time the application and OS are fully optimized, and hopefully our earlier experience where Internet battery life for a "well used" Win7 to Win8 upgrades dropped an additional 25% will get worked out.

I should also point out that the use of Flash in the browser battery life tests could be having a very significant impact on IE10CP. I noticed during the tests that the browser loads the pages much more slowly than in IE9 at times—e.g. sometimes it will take upwards of 20 seconds for the main page (a cached version of AnandTech.com) to load, where most other times the page will load in less than five seconds. 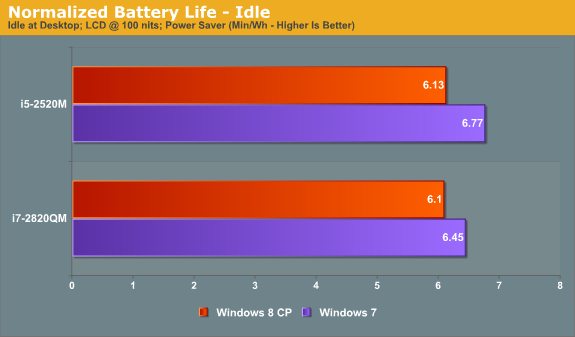 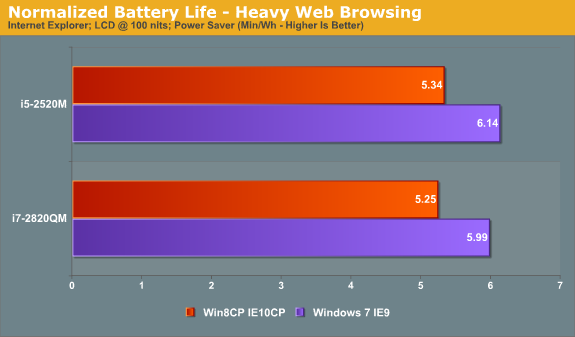 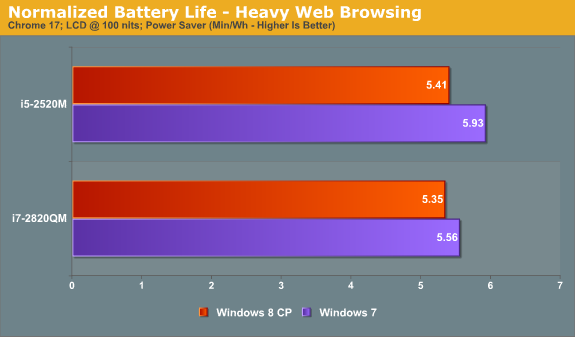 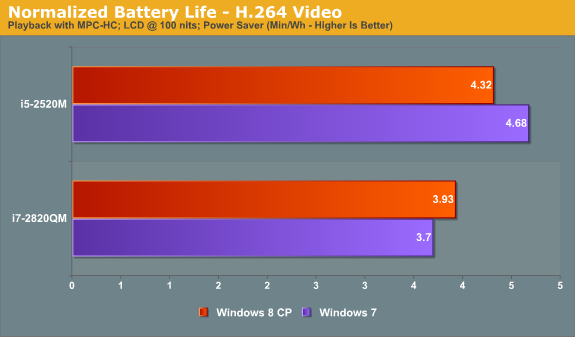 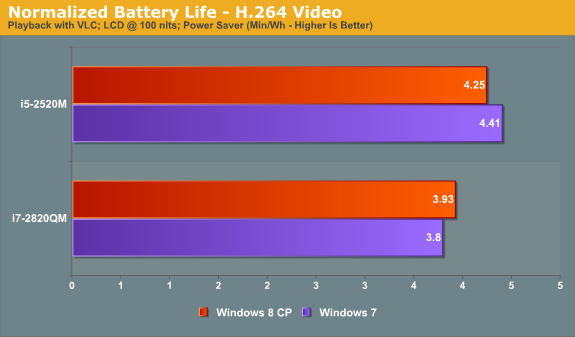 Along with our pure battery life results, we also calculated normalized battery life for the same tests. The ASUS K53E has a 56Wh battery and the Compal notebook has a 71Wh battery, so we simply divide the number of minutes by battery capacity. As expected, the K53E takes the lead over the Compal in all of the normalized battery life results. It has a smaller LCD (and a lower resolution), giving it a particularly large advantage in things like full screen video.

Obviously, we’re still only looking at two laptops, and there are many types of laptop that we haven’t been able to test with Windows 8 CP. Just to list a few items that we can’t comment on right now, we didn’t look at battery life with discrete GPUs from AMD or NVIDIA. Drivers and WDDM1.2 have the potential to change things even more for such laptops. Likewise, we didn’t look at any switchable graphics laptops (NVIDIA Optimus or AMD Dynamic/Manual Switchable). I don't have any AMD-based laptops right now that I can test Win8 on, so the two laptops are relatively recent Sandy Bridge models. All of our current test results also come from laptops with SSDs; my experience in the past two years is that SSD vs. HDD doesn’t make much of a difference for battery life unless you’re specifically placing a moderate to large load on the storage subsystem, but there’s still a chance for something to change.

Long story short [Ed: Too late!], Windows 8 Consumer Preview currently shows slightly lower battery life in most of our tests compared to Windows 7, and Internet Explorer 10 CP shows quite a bit worse battery life than IE9. We wouldn’t worry too much about the drop at this point, though again it’s worth noting that certain combinations of hardware and software could show a larger change than what we experienced—for better or for worse. If you need every last bit of battery life, we’d recommend keeping a backup of your Windows 7 installation handy in case things go wrong with Windows 8 CP, but for typical users and those interested in checking out how Windows 8 is shaping up, factors other than battery life are likely going to be more important to your overall experience.

If there’s any specific type of laptop you’d still like to see us test with Win8CP that we haven’t covered with these two laptops, let us know and we’ll see what we can do, but no promises—we’ve probably already gone overboard with battery life testing on a beta OS! Likewise, if there are other battery life tests you’d like us to run on these two laptops, we can look at that as well. Just let us know what you’d like to see and we’ll try to make it happen.