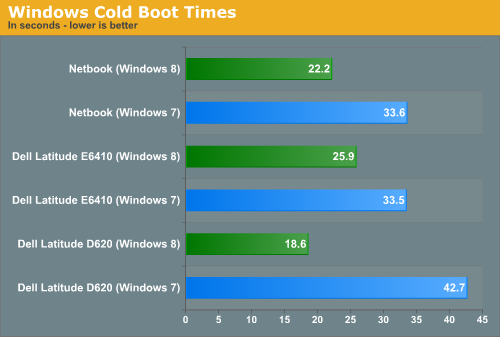 Microsoft claimed that Windows 8 featured improved boot times, and that claim is definitely true—boot times vs. Windows 7 are down across the board. These reductions are due to some architectural changes that Microsoft has made—a Windows 7 shutdown would completely purge the OS and all running programs and user sessions from memory and then re-load a fresh copy at next boot. Windows 8 unloads the user session and running programs from memory, but saves the core OS to disk from RAM as it would do if the OS were hibernating. The result is a much faster startup time all around, even on mechanical HDDs. If, for whatever reason, your system doesn’t support hibernation (or if you’ve turned it off), these boot time advantages will evaporate.

But what's that, you say? How is a netbook that barely meets the minimum system requirements booting more quickly than a late-model Dell Latitude? Perhaps these numbers will clear things up: 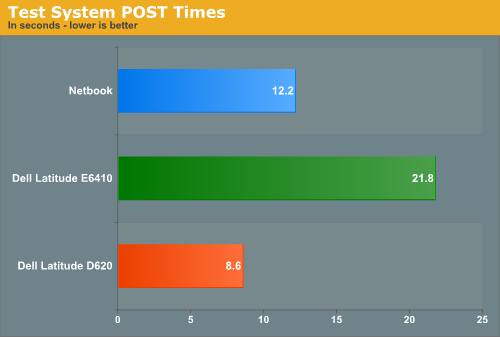 This is one of the instances where hardware designed for Windows 8 will probably have an advantage over older hardware that has been upgraded—as you can see here, a computer’s time to POST is a larger than ever percentage of total boot time. Thanks to its newer hardware and SSD, the Latitude E6410 only takes four or five seconds (!) to boot to the login screen in Windows 8, but its nearly 22 second POST time means that both the Latitude D620 and the lowly netbook are ready to use more quickly. Systems designed for Windows 8, especially those configured to use UEFI instead of legacy BIOSes, can have drastically shorter POST times, and new computers equipped with SSDs may well go from powered-off to ready-for-input in just a few seconds.

To test claims of reduced memory usage, I took the same machines and let them idle at the desktop with only the Task Manager running. Both the Windows 7 and Windows 8 installs used the same drivers, so any background processes running on one OS were also running on the other OS. 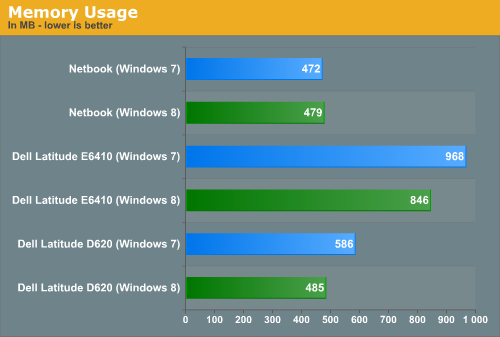 We see marginally lower base memory usage in Windows 8 compared to Windows 7 on the two Dell laptops by a noticeable but not staggering amount. The netbook, with its 1GB of RAM, sees about the same base memory usage under both operating systems—because of the extra caching and preloading that's going on under the hood, my experience has been that Windows 6.x's memory usage increases when you give it more RAM to work with. That computers with 2GB and 8GB of RAM would have a higher base memory usage than a machine with 1GB of RAM shouldn't be surprising.

These slight savings won’t keep you from needing to upgrade your RAM if you’ve been thinking about it, but it’s impressive that Microsoft has been able to hold steady or slightly decrease the amount of RAM used in spite of the additional features (and remember, since Windows 8 includes both anti-virus and anti-spyware protection built in, these numbers should look even better after an install of Microsoft Security Essentials or another anti-virus package on the Windows 7 machines).