The widespread adoption of cellular connectivity in an increasing number of laptops and tablets have made our computing devices more mobile than ever before, but it has also given rise to an age of data caps, bandwidth throttling, and exorbitant prices from carriers. In the United States, unlimited data plans are a thing of the past, and as such any operating system worth its salt is going to have to be more careful about what, where, when, and how it sends and receives data.

To that end, Microsoft has instituted several features in Windows 8 that both users and developers can utilize to measure data usage and keep it in check. 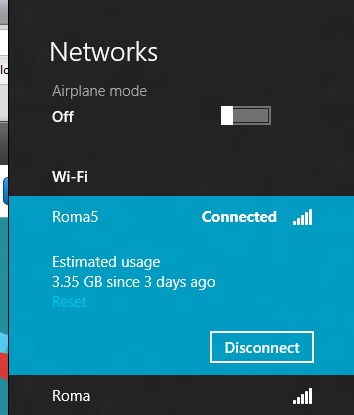 Thanks to class drivers (which we'll discuss in just a minute), mobile broadband chips are treated as first-class devices in Windows 8—the same as wi-fi, ethernet, Bluetooth, and USB 3.0, among others—which means that broadband adapters can be turned on and off through the Windows GUI in the same way that wi-fi and Bluetooth now are, and there's also an Airplane Mode can turn all of it off in one swoop, just like on a smartphone (see above). As on phones, Windows will automatically prioritize wi-fi networks when both wi-fi and cellular are available.

This increased integration into Windows has many benefits: if your laptop or tablet has a SIM card installed, Windows can automatically detect which carrier it's associated with and download any available mobile broadband app from the Windows store, and carrier-unlocked laptops and tablets can choose between multiple cellular carriers if the hardware supports it. Windows also offers estimated data usage figures when connected to cellular networks, and when connected to a cellular network the OS will adjust its default behaviors to conserve bandwidth (for example, deferring the automatic downloading and installation of Windows updates until wi-fi is available). 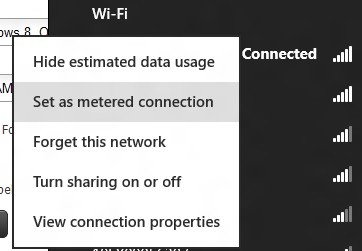 Though it is off by default, these bandwidth conservation features can also be enabled for traditional wired and wireless network connections by right-clicking the name of the network you're connected to. While on a metered network, apps can now use new APIs to force network-aware Metro apps to use less data when possible (another example: using a low-bandwidth movie stream rather than a high bandwidth one). Network-aware Metro apps are required to use these APIs, and users can check how much bandwidth apps are using (both on metered and non-metered networks) in the new Task Manager.

Improvements to networking in Windows also extend to file copying, namely the SMB networked file sharing protocol. In Windows 8, the protocol can now shift dynamically between different network adapters during copy operations so that it always uses the fastest possible connection to transfer files. To demonstrate, I began copying a few gigabytes of data to a fileserver on my home network using a slow wireless G connection:

Then, without pausing the file copy operation or disabling my wireless card, I plugged the laptop into the network with a gigabit ethernet cable:

As you can see, as soon as Windows detected a faster network interface, it without complaint began copying the files using the faster connection. I then unplugged the laptop from the ethernet cable:

Again without issue, it switched back to the slower connection and continued copying the files. While this flexibility is impressive, it should be noted that it can only kick in for file transfers between two Windows 8 (or Windows Server 8) computers.

Windows Vista broke a lot of things when it launched, and drivers was a big one—at least part of Vista’s caustic reputation was earned because third-party drivers made the platform so unstable. Since then, Microsoft has been committed to maintaining driver compatibility between Windows versions. During my testing, I found that the vast majority of drivers certified for Windows Vista and Windows 7 worked without issue in Windows 8, lending credence to Microsoft’s assertion that Windows 8 will be able to run on anything that could run Windows 7.

Windows 8’s main innovation is the sheer number of class drivers it introduces. For the un-indoctrinated, class drivers target defined specifications rather than specific hardware. Class drivers are the reason you don’t need to install specific software to run things like mice, keyboards, or USB 2.0 controllers.

Windows 8 adds new class drivers for things like USB 3.0 controllers, printers, motion sensors, mobile broadband cards, and a few others, all of which should be very useful on modern systems running Windows 8 or Windows on ARM. My personal experience extends to the USB 3.0 driver, which worked just fine for the oddball Fresco controller in my Intel desktop board, and the printer drivers, which worked well for a variety of local and networked printers I connected to from my various Windows 8 testbeds.

Microsoft also provides a new basic display driver in Windows 8. While the old generic display driver ran using the Aero Basic theme, the new driver appears to have basic support for Aero effects and transparencies. Among the systems that I tested, only a few had GPU-specific graphics drivers that installed from the DVD. While this may not be true of the RTM version of Windows 8, it looks like Microsoft is scaling back on the number of included graphics drivers to save space—you’d best check Windows Update or your manufacturer’s web site for updated graphics drivers, if they’re not included.