Idle noise is generally silent (30dB noise floor), but even slight loads or heat can periodically trigger one or both of the fans to come on. A single fan spinning at minimum RPMs will bump the noise level up to 33dB for the CPU fan, or 34dB for the GPU fan; however, while those numbers are still quite low, they don't tell the whole story. The character of the noise is rather obnoxious and grating, with a higher pitched grinding whir even at minimum RPMs. What's more, if both fans come on, you often get a harmonic resonance that makes the perceived noise even worse, at least to my ears. It's not untolerable (says the guy who worked in a data center where the cooling system and servers generated over 70dB ambient noise 24/7), but when the fans come on you will most certainly notice them. 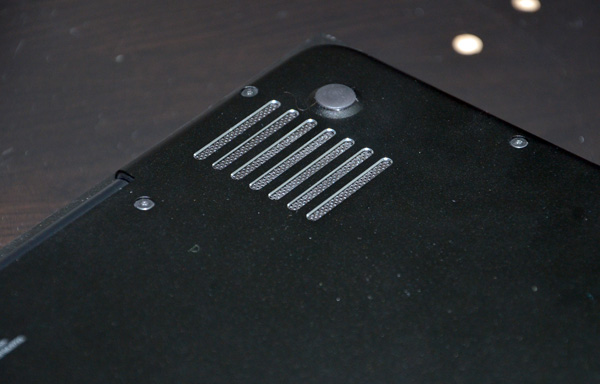 Once we start to put moderate loads on the system, the fans start becoming louder and increasingly annoying. Even moderate gaming loads will quickly ramp up the fan speeds until the Blade kicks out around 40dB from 18 inches away. More taxing games, particularly where the CPU and GPU are both getting a workout, will easily hit 43dB. Finally, in our worst-case stress test where we run Cinebench 11.5 with two threads and run any graphically intensive workload—it didn't matter whether we used Furmark, 3DMark06, or any of the games from our test suite—and the acoustic noise can break the 44dB level. After several minutes looping Cinebench 11.5 with Furmark, the maximum noise output registered 46.5dB, which is quite possibly one of the highest results I've seen from a notebook in the past four years!

Just by way of comparison, standing in the middle of my work area where I have several gaming desktops running, if I load up games on all of them so that the GPUs are pushing higher noise levels, the ambient noise level in the room registers around 46dB. Even in that environment, when I put a gaming load on the Razer Blade, it's audible above the other PCs in the room because of the higher pitch of the fans. In short, while Razer's design is certainly impressive and they've put a whole lot of performance into their ultrabook-thin chassis, the price they have to pay in noise from the fans is quite steep.

Temperatures from the system are equally unimpressive. Starting with our HWmonitor results, the internal temperatures on both the CPU and GPU can get very high. Actually, the CPU is worse off than the GPU, as we hit 95C on the cores compared to "only" 79C on the GT 555M. While both temperatures are still within specified limits, they're higher than what we usually see in laptops—again, the thin chassis is making its mark. Perhaps Razer should've waited for Ivy Bridge to introduce the Blade?

Exterior temperatures are also a concern, as the aluminum shell does a good job at conducting heat. The palm rest and keyboard area both get warm to the touch, but not uncomfortably so. This is no surprise considering the internal layout, however, as the CPU and GPU are both located near the back of the chassis, and that's where the heat is noticeable. On both the top and bottom of the Blade, the back three or so inches of real estate can get hot to the touch under sustained loads. We didn't have a thermometer on hand capable of measuring surface temperatures, unfortunately, but I'd peg them at >50C if you've been running games for 30 minutes or more.