And so, we arrive at the Switchblade panel, which resides to the right of the keyboard. This is Razer’s crown jewel, the Blade’s pièce de résistance, and probably the coolest feature we've seen on a notebook computer in a very long while. And I truly mean that. 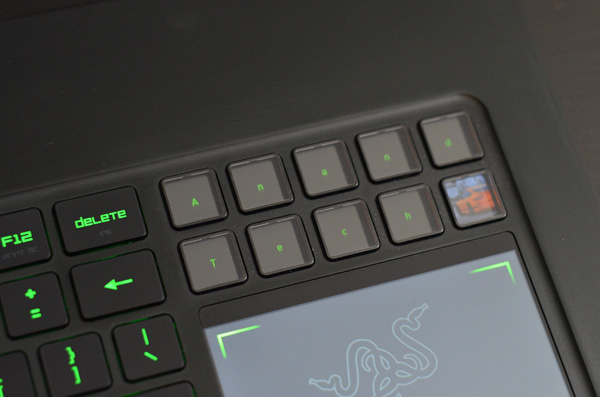 Switchblade starts with 10 LCD tiles arranged in a five by two grid above the LCD touchpad. Razer calls them Dynamic Adaptive Tactile keys, a fancy way of saying that the keys have individually customizable LCDs that users can change as they see fit. Think about a miniature Art Lebedev Optimus built into your laptop; the word awesome doesn’t quite do justice to how awesome it actually is. The keys are 15mm x 15mm squares with 115x115 resolution, and you can get up to 10 pages of custom shortcuts. I can’t imagine what one would do with 100 different shortcuts, but I suppose someone out there has a need for it.

The touchpad is similarly interesting. It’s a 4.05” capacitive multitouch unit with a resolution of 800x480. The relocation to the right of the keyboard requires some mental recalibration, but after the second day, it feels completely natural. The positioning makes gaming on a touchpad much easier—it’s significantly more intuitive attempting to game on a standard touchpad below the keyboard. Granted, it still won’t get anywhere near the experience with a real mouse, but it’s livable, unlike the touchpad norm, which is a lot closer to laughable. The Synaptics multitouch drivers have support for the main multitouch gestures—two finger scroll, pinch to zoom, and rotation—along with three finger horizontal swipes for front/back (or switching between pages of the dynamic keys, depending on what Switchblade mode you’re in). 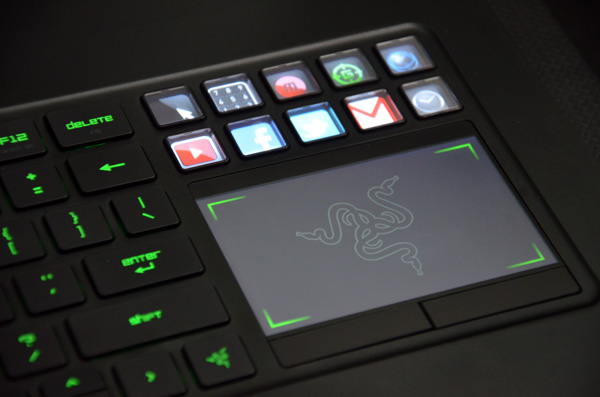 As a touchpad in day to day use, it works quite well—think using a smartphone as a touchpad, and you’ve got the right idea. The surface is glossy, which I personally didn’t have an issue with, but Razer includes a matte finish screen protector in the box for the people that don’t like their trackpads quite as smooth. At first, the glass has a bit too much friction, but it gets easier to use over time. The gestures are pretty smooth, especially vertical scrolling. This is one of the few Windows notebooks that has a relatively smooth multitouch scroll, though still not as smooth as the physics-accelerated scrolling in OS X. The only minor complaints I have with the functions are related to the mouse buttons—I don’t like how the glossy plastic visually contrasts against the matte interior, and the click itself doesn’t have fantastic feedback. You know when I said there’s nothing about the Blade that looks or feels cheap? The mouse buttons are the exception to that statement, though overall they’re a trifling issue at most. 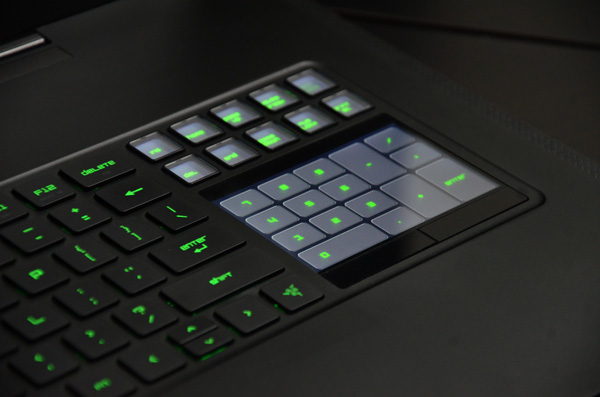 Switchblade ships with ten apps—the standard trackpad mode with 10 user-assignable keys, .a numberpad, a macro recorder, gaming mode (trackpad off, certain keys disabled), a mobile browser, YouTube, Facebook, Twitter, Gmail, and a clock. Switching between them is pretty simple—hit the Razer button at the bottom right corner of the keyboard and you’ll go back to the Switchblalde home page, from which you can launch another app. You can define different sets of shortcuts for different keyboard profiles, for example in different games. You can select custom icons for the user-defined shortcuts—Razer includes an icon set for Star Wars: The Old Republic (the Switchblade UI is also available as a standalone peripheral in the SW:TOR gaming keyboard), but any image file can be selected, even high-res JPEG images. Unfortunately, Windows ICO files don’t seem to be usable, which makes life a little bit more difficult. 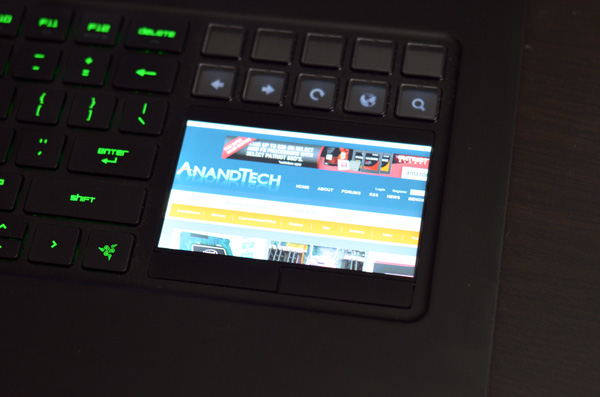 The number pad, macro recorder, gaming mode, and clock are all pretty explanatory. The clock doesn’t have any other functions—no timer or stopwatch to speak of, unfortunately. Gmail, Facebook, Twitter and YouTube just bring up mobile versions of those sites; however, it’s relatively non-optimal because of the browser being used. The browser user agent identifies it as “Browser User Agent String: Mozilla/4.0 (compatible; MSIE 7.0; Windows NT 5.1; Trident/3.1; IEMobile/7.0)”, and from the digging I did it appears to be a version of IE7 running on an embedded Windows XP. and it’s quite simply not great. Compared to the WebKit-based browsers in recent smartphones, it’s relatively poor. JavaScript seems to be disabled, because SunSpider doesn’t run and Acid3 throws an error message about scripting being disabled. The browser scores 40 in the HTML5 test. But even functionally, the browser isn’t optimized—it doesn’t have bookmarks, and it doesn’t stay on the page you last used—every time you exit the browser application and reopen it, it goes to the RazerZone webpage, and forces you to navigate from there. It’s usable in a pinch, but you’re almost better off browsing on any other mobile device. 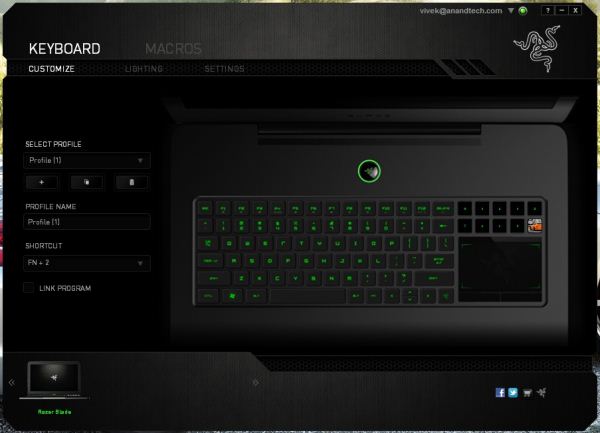 Switchblade is very much tied to Razer’s Synapse service, using the configuration software to change settings of the dynamic LCD keys and keyboard, as well as managing macros and backlighting. You first need to create an account and sign in to access the Switchblade apps; Synapse will automatically sign in on boot, even without an internet connection. It’s a pretty intuitive software to use, but it appears as though the software isn’t particularly stable yet. At first I had some issues with Synapse crashing, but reinstalling the driver for the Switchblade panel seemed to fix it. There are still some quirks—Switchblade had some issues with coming out of standby, though resetting the profile in Synapse fixes that. Very occasionally, the entire system kills itself, with the LCD keys going white and the keyboard and mouse going unresponsive, in which case, a reboot is necessary. The minor instabilities aren’t a big issue, because they’re far and few between, but the issues coming out of sleep are definitely more so, because it happens almost every time. It’s also worth noting that not all users reported having these issues, but I’m not the only one to have them, so real-world mileage may vary.

The keyboard is an interesting proposition. It’s fully anti-ghosted, is backlit in Razer green, and appears to be designed with aesthetics in mind. Every single key can be reassigned in Synapse, including letter keys and everything else. Want comedy? Reassign all the keys to random letters and then hand the Blade to a friend. The keyboard is really nice to look at—the font used is squared off, like a Pac-Man era arcade game, and there are some touches like the E, W, and M keys being the same and rotated differently (along with the R and L keys, the Z and N keys, etc), playing off the geometric properties of the letters. It’s fun, it’s stylish, and it simply looks cool. In use, it’s not as rosy. There’s not much key travel, though Razer’s reasoning for this is that the shorter key depth means the keyboard is more responsive in gaming situations. Which makes sense, but unfortunately, when typing an 8000 word review, it doesn’t feel as great. I switched from the Blade to a ThinkPad for an afternoon, and every key felt like a bottomless pit. Keyboards are based to some degree on preference, and while I don’t have a problem with shallower keys, I feel like Razer takes that a little bit farther than I would like. On the good side, there’s no flex and the whole thing feels solid. 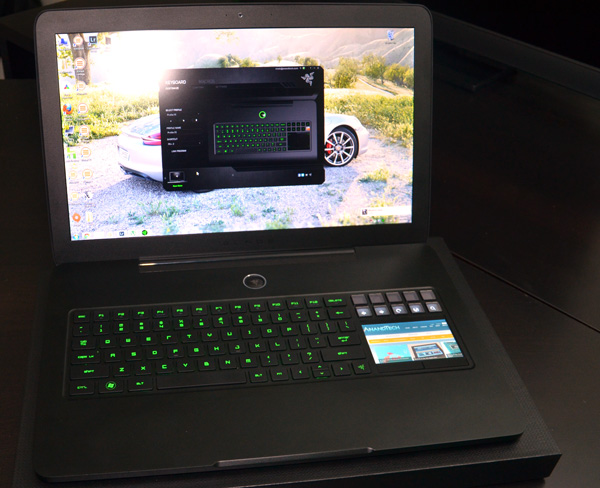 But the layout as a whole is a bit messed up. I’ve had laptops with the function key in the left corner, some with it on the other side of the control key, and I’ve usually been completely okay with all of them. The Blade is the first time I’ve really had an issue with Fn key placement—it’s a surprisingly annoying ergonomic detail to get used to. Having the function key on the right side of the space bar just seems contrary to logic. Other quibbles: the right and left arrow keys are full height, while the up and down keys are half height; the unevenness is offputting. I wish they would have just borrowed the Apple way and gone with half height keys in all four directions. The other issue is that while the keys are backlit, the secondary functions of the F-keys aren’t, so unless you have them memorized, you end up fumbling with keys in the dark to turn the brightness down or change the volume. Just minor details, all of them, but they do pose a few usability issues I hope that Razer will fix next time around.