Before starting on the Blade itself, let’s talk about what it represents to Razer as a company. This is Razer’s first foray into the PC space, and it’s a very, very solid first effort. There are definitely some details that show they’re new to this game, but they’re the kinds of things that Razer will figure out as they move forward. The overall level of polish and design acumen shown by the shipping Blade suggests that Razer will have success as they expand their gaming system line, especially towards the more mainstream parts of the PC market. I think it would be really interesting to see them put out a 15” version of the Blade with a rearranged Switchblade UI, or possibly a small form factor, game console-style PC (similar to the new Alienware X51). Razer acquired the late OQO’s design and engineering team (makers of handheld PCs in the mid-late 2000s) along with the ODM that developed a number of Intel’s design concepts (the Nikiski glass trackpad ultrabook, the UrbanMax slider, the original Origami concept UMPC) to create their own ODM design house in Taiwan to support the Razer teams engineering work on the Blade. Those moves have definitely paid off in the development of the Blade and their transition into the gaming PC market. 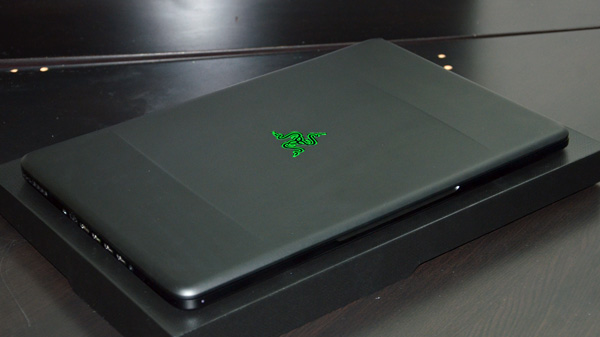 Now, for the Blade, which is definitely one of the more interesting notebooks we’ve tested recently. For some time now, the notebook market has been relatively consistent; other than the Ultrabook movement, we haven’t seen much that’s truly different in quite some time now. The Blade is unique; it’s not really comparable to any other notebooks out there and you’re not going to see anything as focused to the overall experience of gaming as Razer’s halo product is. It’s not the fastest notebook out there, but it’s adequate for gaming at 1080p. You’re not going to set FPS records, or run every new game at ultra settings, but if that’s the goal, you’re probably gaming on a desktop anyways.

I’m not traditionally a gaming laptop guy. When I game, it’s on my desktop or my 360 (I’d like to add that contrary to my coworkers’ beliefs, I do actually game when I get the time). I used to game on notebooks before I got a MacBook Pro, but never on gaming notebooks, simply because 17” gaming notebooks were so far away from the concept of portability. Even some of the more gamer-centric 15” notebooks (Asus G5x series, Alienware M15x) were just too bulky to be considered reasonably portable. I deal mostly with 13” and smaller systems; I can’t actually tell you the last time I carried a laptop that weighed more than the MacBook Pro’s 4.6lbs.

The Blade is the first 17” notebook I’ve ever wanted to carry around. It’s legitimately portable, unlike so many other gaming systems out there. But we do have some issues with Razer calling the Blade the world's first "true gaming laptop". There are plenty of smaller variants of gaming-centric laptops we've seen over the years—Alienware's M11x and M14x are two we could easily cite as being small enough and light enough to deserve the term "laptop" while still providing good gaming performance and acceptable battery life. I will grant that the Blade has a significantly more focused gaming experience, which is probably what Razer was getting at. Everything about the Blade’s design, from the ground up, was built with gaming in mind. Almost every ergonomic or design-related concern I brought up in conversations with Razer’s team had a reasonable gaming-centric rationale behind any decision that was made.

Naturally, as in any serious gaming system, the performance is something that has to be mentioned. The Blade is very quick in normal, everyday use - the SSD and 2.8GHz i7 see to that. And the GT 555M acquits itself surprisingly well in gaming situations; as long as you don't crank up the resolutions or settings too high, it's completely livable. But due to thermal constraints, it doesn't run at the same level as notebooks with GTX-grade graphics. That's where an update to Ivy Bridge and Kepler would be helpful; IVB's lower TDP would be especially significant from a thermal standpoint, though the boost in CPU performance certainly wouldn't hurt. Kepler  would bring not only the generational boost in performance but also a likely increase in power efficiency due to the 28nm manufacturing process. The more efficient chips open up a lot of possibilities for Razer due to the thermal design; quad-core CPUs and GTX-caliber graphics wouldn't be out of the realm of imagination. Obviously, we'll see a large scale shift to the IVB/Kepler combo in the near future, but it's a move that would increase the overall appeal of the Blade tremendously from a performance standpoint. 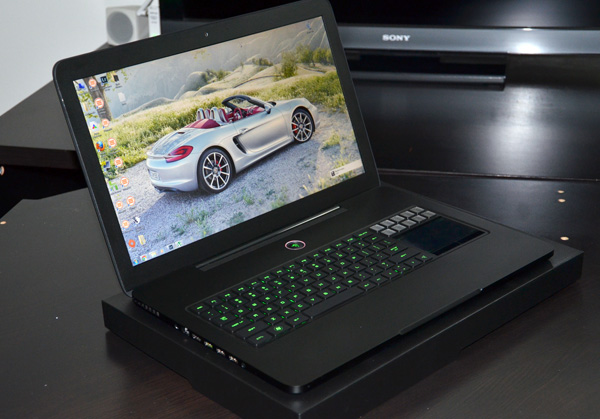 There is no doubt in my mind that the Blade is too expensive. There are reasons for that—the kind of volume Razer is manufacturing the Blade in is nowhere near the Dells, HPs, and Samsungs of the world. The logic is simple: the higher the volume, the cheaper it costs to manufacture. This means the Blade is rather expensive to manufacture, and it’s something that could easily add 20% to the total cost of production. Other than that, the display is relatively pricey, as are the top shelf CPU and SSD. The Switchblade UI panel and anti-ghosting keyboard couldn’t have come cheap either. That’s not to say that $2799 is a good deal, or even a mostly reasonable price for a notebook with this level of specs, but there are legitimate reasons as to why it costs so much.

And if that bothers you, the idea of getting midrange graphics performance from a very high end gaming laptop, you’re not the target market. If it comes down to performance versus price, you will be happier spending your $2800 on an M18x or two ASUS G74s. Razer intends the Blade for consumers that don’t mind paying a premium price to get a very unique product, or gamers more focused on the overall experience of mobile gaming than raw computing power and the highest framerates. It’s definitely a different notion—the idea of adequate graphics in a more mobile shell—and it requires a certain way of thinking, but if it makes sense to you, the Blade is a great way to go. As the immortal Ferris Bueller once said, “it is so choice. If you have the means, I highly recommend picking one up."

The word desirable is one I try to stay away from, because it tends to be frequently overused. But it describes one specific concept very well, that of being worth having or seeking as by being useful, advantageous, or pleasing. And that definition fits the Blade to a T; I can find no better word to use for it as a descriptor. The Blade is, quite simply, a highly desirable notebook, and it comes with a pricetag to match. If that sounds up your alley, you'll love it.