The Thunderbird will still use the name Athlon, but in order to distinguish it from the older Athlons (based on the K7 and K75 core), we'll refer to it as the Thunderbird.  Keep in mind that when you go out to buy one, it should be listed as an Athlon.  We'll get into the ways to differentiate the part numbers between the older Athlons and the new Thunderbird-based Athlons later in this article, but first, the basics. 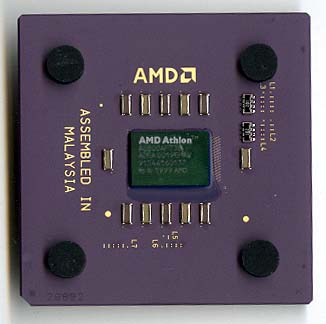 Currently, the Thunderbird itself is being released at 750MHz, 800MHz, 850MHz, 900MHz, 950MHz and 1GHz.  This doesn't mean that there won't be slower OEM parts floating around; for the most part you can expect to see 750MHz – 1GHz Thunderbird parts available almost immediately. At 850MHz and slower clock speeds the Thunderbird runs at a core voltage setting of 1.70v, but at 900MHz and greater the voltage is set to 1.75v.

The Thunderbird features a full 256KB of on-die L2 cache that operates at clock speed, meaning that, on a Thunderbird 750, the core and the L2 cache both operate at 750MHz.  This is in contrast to the original Athlons that operate their L2 cache at a certain fraction of the core clock speed; in the case of the Athlon 750, its external 512KB of L2 cache runs at 300MHz.

Integrating the 256KB of L2 cache on-die increases the die size of the 0.18-micron Athlon core by about 20%, which still makes the Thunderbird with 256KB of integrated L2 cache a smaller die than the original 0.25-micron Athlon.  More specifically, the Thunderbird features a 120 mm^2 die size, compared to the 184 mm^2 die of the original Athlon (0.25-micron) and the102 mm^2 of the K75 Athlon (0.18-micron).  In comparison, Intel's upcoming Willamette is rumored to have a die size of around 170 mm^2.

All those transistors switching rapidly translates into quite a bit of heat output. While AMD didn't have an exact value for us by press time, they did let us know that the Thunderbird should dissipate in the vicinity of 50W for the higher speed grades. In contrast, the original 0.25 micron Athlon 700 dissipated 50W as does an 0.18 micron Athlon 850. The Pentium III 1 GHz, on the other hand, dissipates just 33W.

The performance benefits of simply adding an on-die L2 cache are application specific, but it mainly allows the Athlon to reach much higher clock speeds and gain much more from those clock speeds than it otherwise would if it had a slower L2 cache running at 1/3 of the processor's frequency.

In spite of the fact that the older K7 and K75 Athlon cores featured a larger 512KB external L2 cache, the integrated 256KB of L2 cache on the Thunderbird is actually faster than its predecessor because the L2 cache is running at such a higher frequency.  While there will be some situations in which the larger L2 cache of the K7/K75 may come in handy, such as with database servers, for the most part the Thunderbird will prove to be faster than the regular Athlon because of its faster low latency L2 cache.

It also paves the way for the Athlon to make the move to a socketed CPU interface, which would make the new Thunderbird the first socketed AMD CPU since the K6-X line of processors.