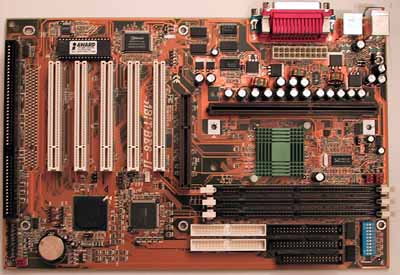 The BE6-II is essentially the same as the BF6 with one notable exception – the BE6-II features an integrated HighPoint HPT366 Ultra DMA 66 controller, thus adding Ultra DMA 66 support to the motherboard.

Because of the presence of the HPT366 controller on board, the BE6-II loses one PCI slot from the 6 that the BF6 has, since the HPT366 acts as a PCI device.  The HPT366 and the first four PCI slots are bus master capable, thus leaving the fifth PCI slot as a slave slot, much like the 6th PCI slot on the BF6.

Unfortunately, the number of devices that can operate in a slave slot are limited and include some PCI graphics accelerators, a Voodoo2, and some Ethernet adapters.  So for most purposes, the BE6-II is really only a 4 PCI slot motherboard.

Just like the BF6, the BE6-II features 5 full length PCI slots while the single ISA slot is not capable of accepting a full length card.

The HPT366 has been known to have compatibility problems with certain devices, including CDROMs and even some hard drives.  Your best bet is to search around the net to see if anyone has had any troubles with their BE6-IIs and the particular devices you plan on having on the HPT366 channels.  One benefit of having this controller on-board is that you still have the two Ultra DMA 33 channels courtesy of Intel's PIIX4e South Bridge, which can be used for all non-Ultra DMA 66 devices.

Like the BF6, ABIT's patented SoftMenu III Jumperless CPU Setup & Configuration makes the BE6-II stand out from the crowd.  The utility that is integrated into the board's Award 6.00PG BIOS provides for a total of 120 FSB speed settings, more specifically standard 66 / 75 / 83 settings plus speeds from 84 - 200 in 1MHz increments.  There is still support for adjusting the PCI ratio (1/2, 1/3, or 1/4 of the FSB speed), AGP ratio (2/3 or 1/1 of the FSB speed), and CPU core voltage (default +/- 0.3V). SoftMenu III also offers the ability to adjust the I/O voltage of the PCI / AGP bus and SDRAM to 3.2 - 3.9V in 0.1 V steps (default is 3.3V) as well as some options for L2 cache latency, all in an effort maximize overclocking potential. The defaults for all these settings are clearly labeled, so causing serious damage will take a bit of work.

In addition to the SoftMenu III jumperless setup, the BE6-II features a set of 10 dip switches that can control the otherwise jumperless features on-board.  This is mainly for OEMs and system integrators and doesn't really apply to most hardware enthusiasts.

Once again, like the BF6, the BE6-II managed to get quite a few BIOS updates from ABIT (it actually uses the same BIOS) that supposedly improved stability when running at 133MHz FSB.  We tried our BE6-II with an older BIOS revision as well as the newer RV revision, which claimed to "improve the 133MHz option in SoftMenu."  In our tests it definitely did: while the BE6-II would lock up under 3D games and applications using older BIOS revisions, under the RV revision the system was noticeably more reliable.  This BIOS is available on ABIT's download site.