Gigabyte just informed us that the GA-6BX7+ features a custom PAL (programmable array logic) chip that allows the 6BX7+ to support two more PCI master slots. This means that all of the PCI slots on the 6BX7+ are master slots. 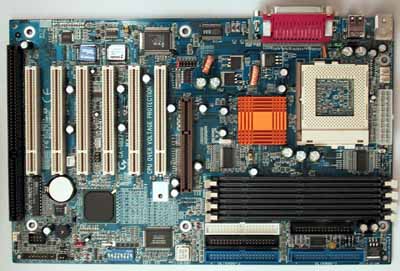 The GA-6BX7+ is definitely a unique board, not because of its features but rather because of its blue colored PCB.  The board is the second and final Socket-370 unit we tested in the roundup and also happens to be the first of two boards present in this roundup that feature the Promise 20262 Ultra DMA 66 controller.

The Promise controller provides the board with two Ultra DMA 66 channels and was seemingly less problematic than the HPT366 controller present on the ABIT and Soyo boards.

In addition to the Promise controller the Gigabyte board features an external Winbond chip that adds support for 2 more USB ports.

The 6BX7+ features 6 PCI slots, but because the PIIX4e South Bridge only supports 5 PCI bus master devices the sixth slot is a slave slot.  At the same time the fifth slot is also a slave since the Promise controller acts as a bus master PCI device, essentially leaving the 6BX7+ with four PCI slots that you can populate with any PCI devices.  The only types of cards that can work in a slave PCI slot are some PCI video cards, the Voodoo2 (since it doesn't take an IRQ) and some network cards so for most situations those last two PCI slots are useless.

The biggest downside to this motherboard is the fact that it has no jumperless CPU setup.  Everything is controlled by a set of 8 dip switches on the motherboard which is fine for OEMs and system integrators but not the best option for end users and enthusiasts.  Also, the voltage settings provided by Gigabyte aren't the greatest variety of settings.  Gigabyte calls the voltage selection their "Magic Booster" (don't ask) and it allows you to select a voltage that is 10%, 20%, 30%, 40% or 50% higher than the default core voltage.  This means for a 1.65v CPU the lowest voltage increase you can get is up to 1.81v which is a bit excessive if you just need a little boost in core voltage.  Definitely not the choice for overclockers.

The truly unique feature of the 6BX7+ is Gigabyte's Dual BIOS support which allows for a backup of the BIOS to be restored if there is an error in flashing.