As always, we wrap up our look at a new video card with a look at the physical performance attributes: power consumption, temperatures, and noise.

While it’s the second sub-series of the 7000 series, the 7700 series is actually first in a number of ways for AMD. It’s the first midrange series to feature PowerTune since its introduction in 2010, and it’s the first time the 28nm process has been used on such low power cards. As such the power, temperature, and noise characteristics of the 7700 series are virtually a blank slate waiting to be filled. 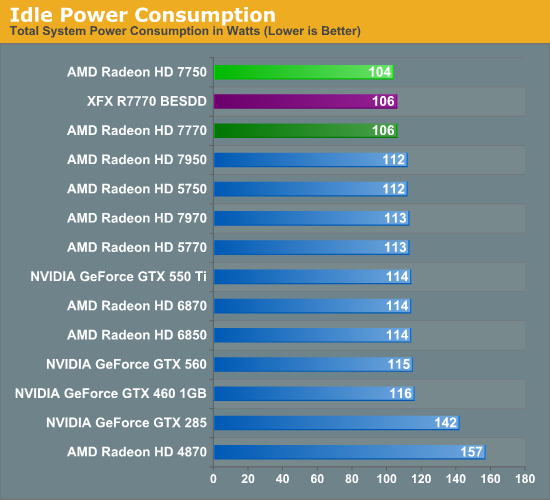 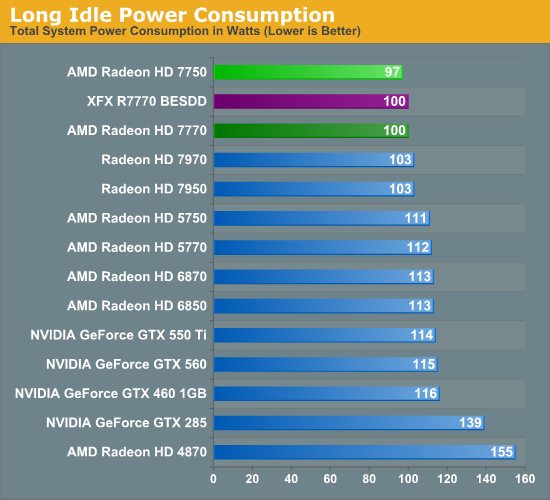 Meanwhile under the so-called “long idle” scenario with a blank monitor, the 7000 series continues to cement its lead. Officially all Southern Islands cards have a long idle power consumption level of <3W since they should all be using the same PCIe controller to keep a heartbeat going, however we’re finding there is a difference, even between the 7750 and 7770. The 7770 consumes 3W less than the 7900 series, meanwhile the 7750W consumes another 3W less, bringing it down to 97W. Since our readings are from the wall it’s tough to gage just how much these cards are still using, but at this point there doesn’t seem to be much farther to drop. 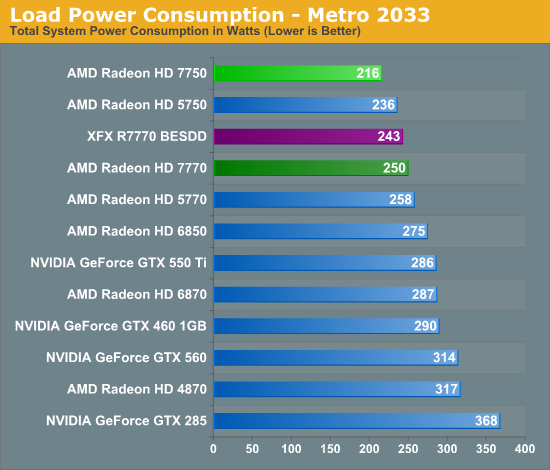 When we talk about the 7700 series bluring the line between what we’d expect out of an AMD 700 series card and an AMD 600 series card, results like this are part of the reason why. With a 75W PowerTune limit the 7750 has the lowest power consumption of any of the cards in our lineup, beating even the 5750. The 7750 is clearly in a league of its own, with only the 7770 drawing similar amounts of power as the 5700 series.

To that extent, it’s interesting to note that the XFX BESDD consumes less power than the reference 7770, in spite of its factory overclock. XFX did not increase the voltage of the card, but we’d still expect power consumption to go up at least a bit, not come down. In any case even with its 10% better performance, it’s consuming 7W less than the reference 7770 here. Otherwise at 250W the 7770 is pulling 8W less than the 5770 and 25W less than the 6850 from the wall, succinctly showcasing the power benefits of TSMC’s 28nm process. 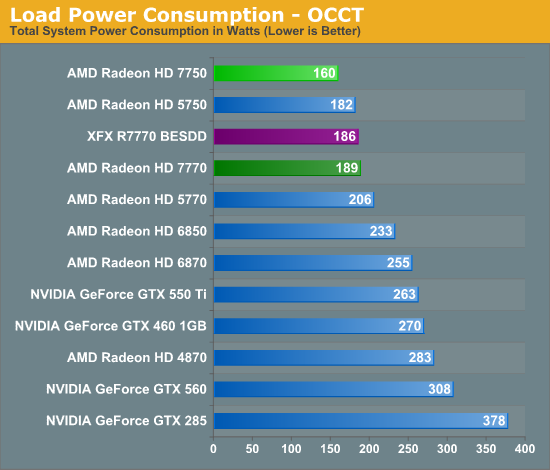 Our results with OCCT largely mirror Metro, with the 7750 in a class of its own while the 7770 consumes less power than anything other than the 5750. Since this is our pathological test, the lack of PowerTune plays a big part here, as PowerTune keeps the 7770 capped at 100W while the 5770 and 6850 are free to go well over their TDPs. 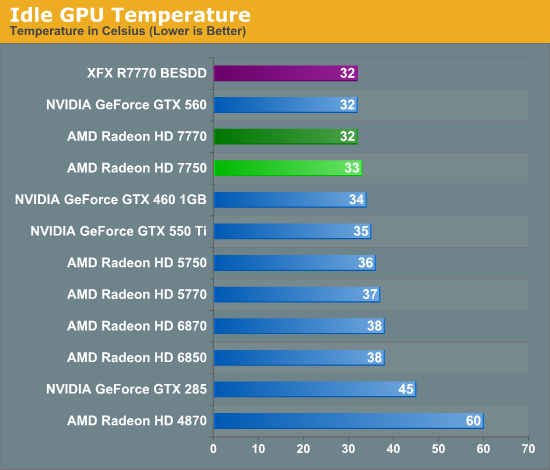 There’s little to say about idle temperatures that hasn’t been said before. With a half-decent cooler, almost any card can reach the mid-to-low 30s. The 7700 series is no exception. 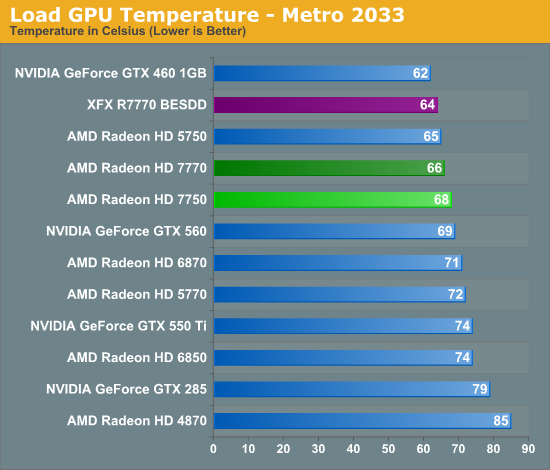 Moving on to Metro, our results are largely consistent with what we’d expect given our earlier power data. Even with the lower power consumption of the 7700 series AMD can’t quite beat the GTX 460 1GB, otherwise with temperatures in the mid to upper 60s the 7700 series looks quite good. XFX’s BESDD looks especially good thanks to the fact that it’s an open air cooler, as it only reaches 64C. 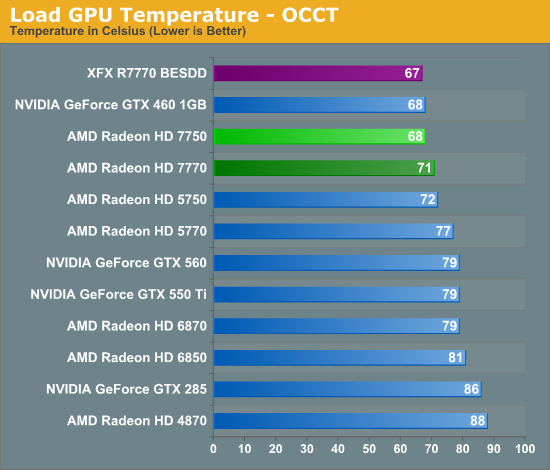 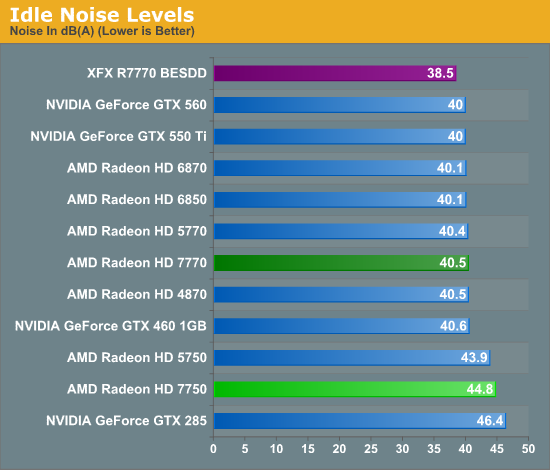 Based on our power and temperature data, our noise data came at somewhat of a disappointment. The 7750 has a small fan with an idle fanspeed of 39%, leading to it being quite loud relative to its competitors. Thankfully none of AMD’s partners will be using that specific cooler, so we wouldn’t expect any retail cards to be this bad. Though if silence is key, Sapphire’s passively cooled 7750 is always an option.

As for our 7770 cards there aren’t any surprises. The open air cooled XFX BESDD does the best, though at only 40.5dB the reference 7770 is doing almost as well on its own. 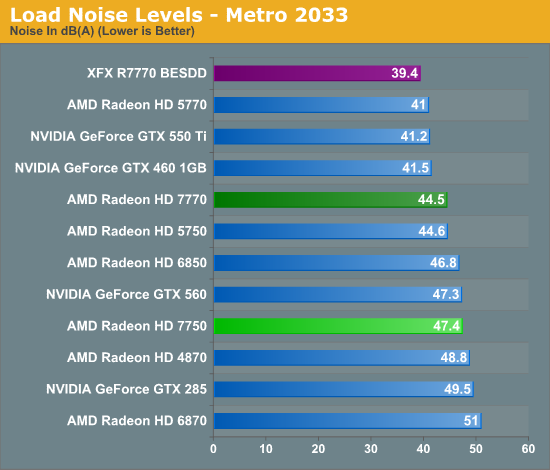 I had to rerun Metro a few times just to make sure our XFX BESDD numbers are right; and they were. XFX’s open air cooler combined with the 100W board limit of the 7770 means that there’s relatively little heat to dissipate, which the open air cooler does extremely well. While this isn’t technically silent it’s damn close.

Elsewhere the reference 7770 does decently, but its half blower nature hurts it when it comes to noise. The noisy 7750 only gets louder, unfortunately. 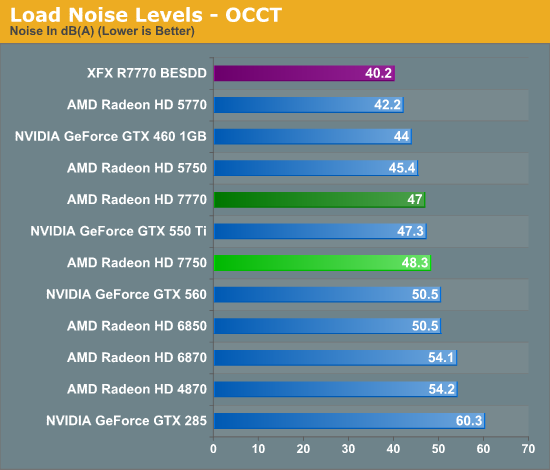 Finally, noise under OCCT is nearly the same story. The XFX BESDD finally goes above 40dB, a testament to the capabilities of XFX’s open air cooler. As for the AMD cards, there’s really not a great deal positive to say as even a traditional blower shouldn’t be quite as bad as what we’re seeing with the reference 7770. Perhaps it’s for the best that none of AMD’s partners are using their reference designs.