In addition to the improvements made to the core of the chip, the GeForce 2 GTS also boasts a new engine that the original GeForce didn’t have.  NVIDIA calls this their Shading Rasterizer (NSR), and its function is much like that of ATI’s Pixel Tapestry Architecture – to allow for a number of per pixel shading effects to be performed in hardware.

The NSR allows for 7 pixel operations to be performed in a single pass, in hardware.  These operations include shadow maps, bump mapping (EMBM, Dot Product 3, and embossed), shadow volumes, volumetric explosion, elevation maps, vertex blending, waves, refraction and specular lighting all on a per-pixel basis. 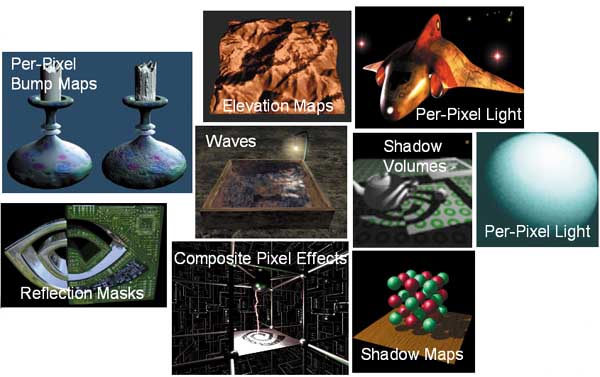 Once again, this is much like the feature set provided for by ATI’s Pixel Tapestry Architecture, which we talked about in greater depth here.