The box bundle, while substantial, has positive points and negative points.  What we have in the box is 12 SATA cables (two with right angled heads), a USB 3.0 front or rear panel with room for an SSD, a long flexible SLI connector, and the usual internals such as IO panel, driver CD and manuals.  Two things to note - other competitors usually include more SLI connectors, and the USB 3.0 front panel cable isn't that long, such that in dual GPU mode it would only be suitable for the bottom of the front of the case, or as a rear USB 3.0 panel. 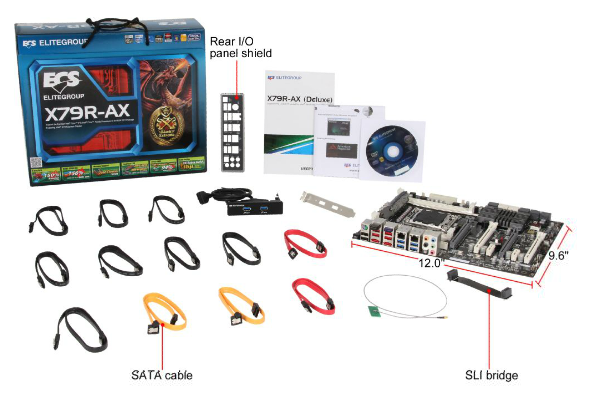 Again, the ECS has a few positive and negative points with the board features as well.  While we have dual gigabit Ethernet, some users may not enjoy they fact that they are Realtek, rather than the Intel NICs we see on almost all the major competitor boards.  One other point of contention is that there are only four DIMM slots for one per channel, rather than eight DIMM slots for two per channel, or that the board uses the Realtek ALC892 rather than the ALC898 that all the other boards at this price range use.  But I really like the fact that for this price, we can get an X79 board with onboard WiFi, Bluetooth, dual NICs, and twelve SATA ports and still enough space for dual/quad GPUs.  It's a combination you will not see on many other products.

Ever since I started reviewing ECS boards, such as P67 and Fusion, there has not been much change in the software available, thus I won't go into detail on many of the specifics, but the package includes at least one gem in their fan controls. 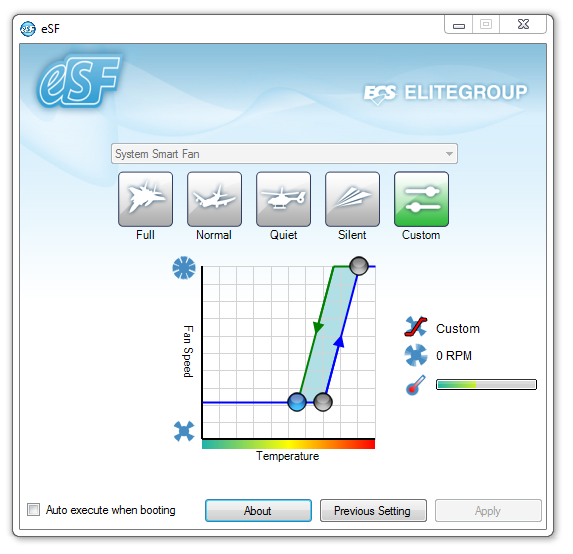 eSF (SF for Smart FAN) controls the SYS headers on the board, allowing for hysteresis in the fan settings.  This is a feature we don't see on other boards (ASUS controls are pretty good in comparison for multi-point curves, but don't do hysteresis), and it definitely worked for ECS when I tested it.

Other software onboard is eOC (OC for OverClock), which gives user control of the BCLK and the voltages.  This is still software used for older chipsets, as we don't have access to changing the CPU multiplier, or that modern CPUs go into various power states and voltages depending on load, meaning that the CPU voltage selections in eOC can fluctuate wildly.  I wouldn't touch the voltages with this tool if I were an end user, in case I accidentally set 1.4 V in an idle state and it then added another +300 mV for a loaded state.

The two other parts of the package are eBLU, a BIOS Live Update tool, and eDLU, a tool which links to the webpage with all the latest drivers.