The Galaxy Nexus - Hardware and Aesthetics

The evolution of Google’s Nexus line is an interesting one. Each year, Google choses both a silicon partner and an OEM to make a unique hardware archetype which it caters a specific build of Android to. We’ve now seen three Nexus handset designs from two OEMs and three silicon vendors - the Nexus One (HTC and Qualcomm’s QSD8x50), Nexus S (Samsung and Samsung’s S5PC110 ‘Hummingbird’), and today the Galaxy Nexus (Samsung and TI’s OMAP4460). 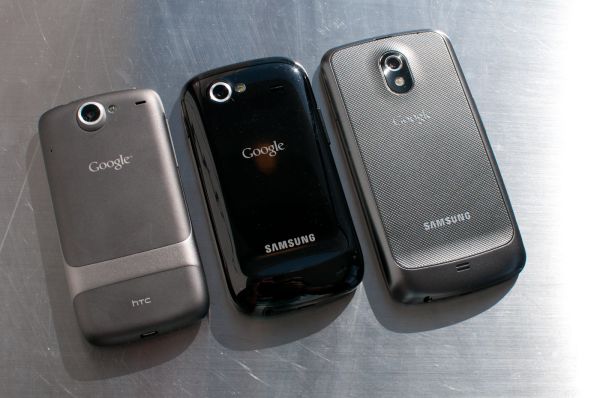 Looking at the hardware of those three handsets gives a great survey of the course the Android ecosystem has taken over the last couple of years. The Nexus One started things out with a 3.7” LCD, capacitive buttons, and hardware trackball. Nexus S then removed the trackball, added a curved 4.0” display, and ditched the microSD card slot. The Galaxy Nexus continues in that direction, increasing display size to 4.65” and resolution to 1280x720, and finally removing the capacitive buttons all together. Instead, the Galaxy Nexus uses a 96 x 720 region at the bottom of the display to visualize the navigational buttons, a move that has the consequence of also keeping the display interaction area aspect ratio close to that of WVGA. 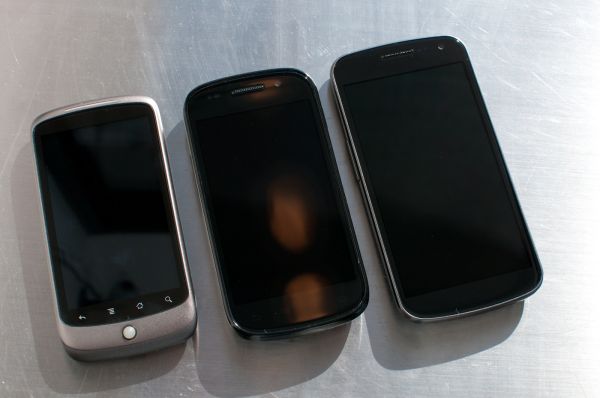 It’s interesting to see how many of the design motifs set by the original Nexus One still have been thoughtfully preserved on the Galaxy Nexus. The notched chrome ring around the camera aperture has continued as a thread for three generations, as has the overall lightly rounded shape. The Galaxy Nexus also retains the chin from Nexus S backside where the speakerphone port and primary cellular antennas are located. In addition, the volume rocker, power/lock button, headphone jack, and primary microphone position from the Nexus S is unchanged.

The Galaxy Nexus’ backside is no longer the extremely slippery and scratch prone plastic that the Nexus S (and original Galaxy S) adorned, instead it’s a textured, lightly soft touch material. I’m always surprised by how much of a difference changing the backside texture makes on the overall in-hand feel impressions I come away with, and in this case it’s a major positive change. It’s clear that this is an evolution of Nexus more than a huge departure from what’s come before - if anything the Galaxy Nexus is like a larger, thinner, more refined Nexus S. 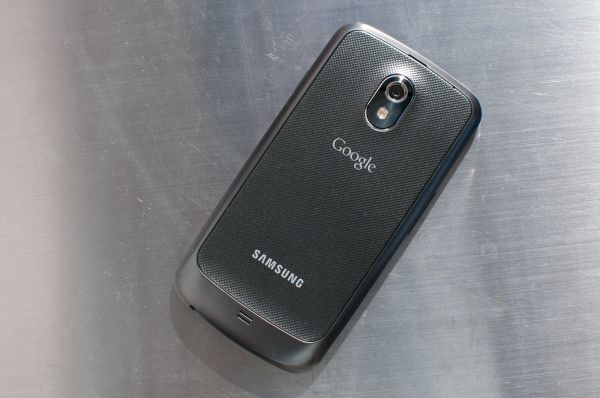 We’ve taken a look at both the CDMA/LTE (codename mysid/toro) and the GSM/UMTS (codename yakju/maguro) Galaxy Nexus variants. 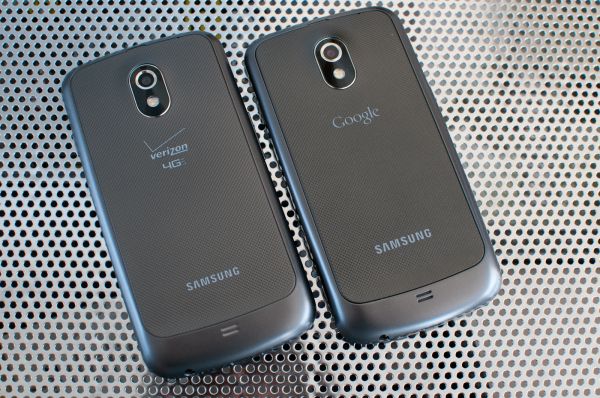 The two differ beyond just the air interfaces they support slightly in the physical department as well, though the two share all the same other features (SoC, display, camera, etc.). The CDMA/LTE Galaxy Nexus is ever so slightly thicker than the GSM/UMTS Galaxy Nexus, though the difference is enough to be perceptible.

In addition, the two have the same exterior “titanium silver” color, no doubt the differences we saw earlier can be attributed to the difference between renders and the real deal. The other small detail is that the two use very different, non-interchangeable batteries - the GSM/UMTS variant uses a 6.48 Whr battery, the CDMA/LTE version gets a slightly larger 6.85 Whr battery. Both of these include the NFC antenna patterned the outside surface of the battery, just under the sticker.

Other than those subtle differences, Samsung has done a good job masking the challenges which underlie having two superficially similar phones with different cellular architectures. The two variants do feel different in the hand, but the difference isn't dramatic.