Unfortunately, the majority of benchmarks that usually grace our smartphone reviews don’t yet have WP7 ports or analogs, but there are a still a number of comparisons we can make. To start, the browser-based performance metrics give a good picture within the Windows Phone ecosystem, and likewise with WPbench, created by one of our own readers and on the marketplace.

There’s been a lot written about performance on WP7 already - namely that comparative analysis isn’t as big of a deal as it is on other smartphone platforms, but of course this is more the result of two things. First, Microsoft’s careful curation of their new smartphone platform with hardware requirements; second, availability of native and managed code execution environments. For the most part, you can pick up any WP7 device and have very good expectation of UI smoothness, but that’s not to say there aren’t differences, especially as the platform moves from one generation of Snapdragon SoC to the next, and now possibly even a move to ST-E. Benchmarking WP7 (and by analog, Windows 8) will become a big deal very soon, however, and numerous SoC vendors and big names in the PC benchmarking scene are looking to port to these platforms.

This current refresh of WP7 devices continues to be based around exclusively Qualcomm SoCs, and the Lumias are no exception. Both the 710 and 800 are based around Qualcomm’s MSM8255 single core S2 Snapdragon at 1.4 GHz with Adreno 205 graphics at the core and dual channel LPDDR2 memory interfaces. This is a 45nm part we’ve seen and explored numerous times before, and as a refresher includes the HSPA+ 14.4 baseband onboard.

Anyhow, onward to the numbers. First is sunspider, which we’ve been using for a long while and recently changed from 0.9 to 0.9.1 with. As a result, I’ve had to re-run devices since the numbers aren’t directly comparable. WP7.5 brings a much improved javascript engine which gives it a big boost in scores. I’ve managed to hang onto the HTC Surround (1.0 GHz QSD8250) and Anand has the Focus (also 1.0 GHz QSD8250), which we’ve included as well. 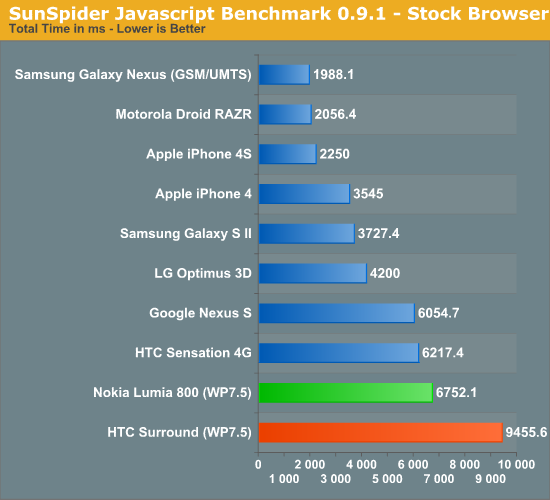 Browsermark hasn’t changed or forced us to re-run things, so we have comparison numbers that show how much difference there is in the browser department in WP7.5. 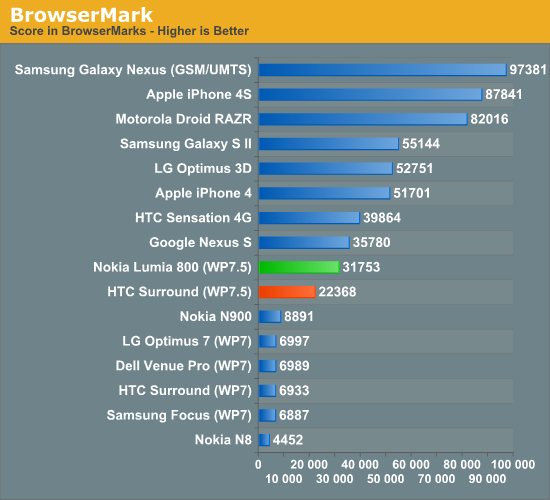 In the synthetics, WP7.5’s new JavaScript engine (Chakra) with JIT brings perf almost up to modern levels and is a step in the right direction, but it’s still behind iOS and Android. Moving to a higher clocked single core probably does make sense for Windows Phone, especially if IE is single threaded at this point.

For system benchmarking on WP7.5 we have WP Bench, which was created by one of our own readers. The benchmark reports a total score in addition to three sub-scores for CPU, memory, and GPU. My only point of comparison, again, is the HTC Surround.

I’ve made a big deal about browsing performance because, for me at least, the stock browser is the one place where performance really must be flawless. OEMs are starting to wake up to the fact that browsing performance makes a huge impact on the overall subjective weighting of a platform’s smoothness, which in turn results in a lot of scrutiny. I’d agree with this assertion as well and toss in a few other things that must be flawless for a platform to feel speedy.

When WP7.5 first started surfacing we took a look at its revamped IE9-based browser which uses Trident 5.0 as opposed to NoDo’s Trident 3.1. Unsurprisingly everything we saw in the emulator applies to the real-world experience with WP7.5 on live devices. Actually things are even a bit better than they were when we played around in the emulator.

The Windows Phone team has made clear several times that they aren’t going to build the browser to any tests but instead real-world page rendering accuracy. That said it’s still worthwhile to take a look at the synthetics. Acid 3 now completes and nearly passes (the boxes in top right subtract some points) where it previously scored below 95. Similarly Acid 2 now is almost flawless. Finally, the HTML5test score increases from 130 to 141 on the Lumia 800 and newer WP7.5 builds, which is a slight but still important difference.

Moving away from Trident 3.1 to 5.0 has made a huge difference on faithful page rendering and eliminated nearly all of the annoying edge cases I saw with previous WP7 smartphones. A number of pages I visit daily back when we did those reviews would render but with a few notable errata, these are now gone completely.

In addition, scrolling performance remains just as speedy as it was before (essentially buttery smooth) as the rendering architecture remains largely the same. We now have all three platforms (WP7.5, iOS, and Android 3.x/4.x) rendering the browser page into a texture that can be translated, clipped, and zoomed with GPU operations. It’s clear that this is the right way to do things to keep the browser UI speedy.

The changes to WP7.5’s browser make (for me at least) the single most notable improvement over NoDo and previous iterations. It’s a huge step forwards in rendering, compliance, and UI, and having that browser experience be as close to perfect as possible is tremendously important.