I think it’s important to start out with battery life for two reasons - I end up spending a huge majority of my time doing battery life tests, and in the case of the Lumia 800 much has been written about battery-related issues.  The full disclosure is that the Lumia 800 unfortunately does have some rather glaring power and charging related problems. The first Lumia 800 we were sampled suffered from a battery-related problem that caused spontaneous rebooting during use and some charging issues. This was swapped out for another that had the updated release version firmware on it. This second device is the one I spent my majority of time with, although this second device also periodically reboots, though not as much.

The second issue is one that becomes visible when you fully discharge the phone, which naturally we do a lot of while testing battery. If you discharge the phone completely, and then attempt to re-charge, occasionally the phone will go into an endless boot loop, where it powers on, starts WP7, detects that the battery is below its power-off threshold, and shut down. Then the cycle repeats. Ordinarily this isn’t a big deal, but for some reason the PMIC (Qualcomm's PM8058) doesn’t really charge the phone while this is going on. I encountered this once, and even after 3 days of charging couldn’t boot successfully until I did a hard reset with the Nokia triple finger salute. The other minor issue is that if you get the phone into this low power state, sometimes it won’t pull any current to charge the phone. It takes a few attempts and getting the phone into the right pre-boot environment for this to work properly. 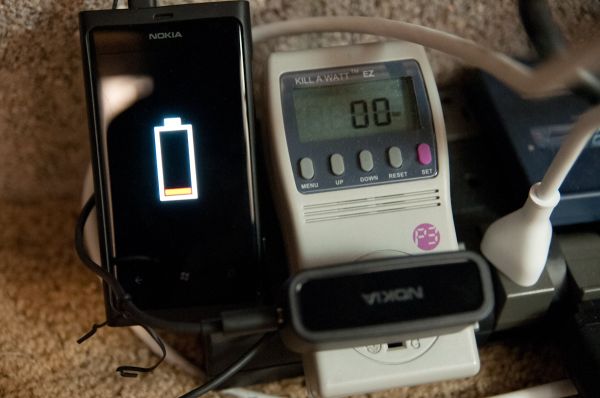 Plugged in but not drawing any current - Unplugging and replugging eventually gets the Lumia 800 to charge correctly and draw 5-6W.

The latest update for the Lumia 800 as of this writing is 1600.2479.7740.11451 and includes “charging improvements” in its change-log, so it’s possible this issue has been addressed already, though there’s another update coming down the line as well. The Lumia 800 we were sampled only was being pushed “1600.2475.7720.11414” due to Microsoft’s staggered update push progress, so again it’s possible this is totally fixed.

There’s a debug menu which can be launched with the dialer code ##634#, and afterwards appears in the normal application list as well. In here you can see the real battery status, charge capacity, and even the instantaneous current draw no doubt as reported by the PMIC. While I wasn’t affected with the bug that sends the charge capacities to 0 mAh, this is still a useful menu.

So the normal corners of our battery life testing are how long the phone lasts while loading pages over 3G and WiFi, and then call time. Page load tests take place with the display set at 200 nits, though on WP7 the only display options are Low, Medium, and High (we selected Medium). We’ve added hotspot tests too which eliminate the display from being a factor, though these aren’t presently able to be tested on WP7. 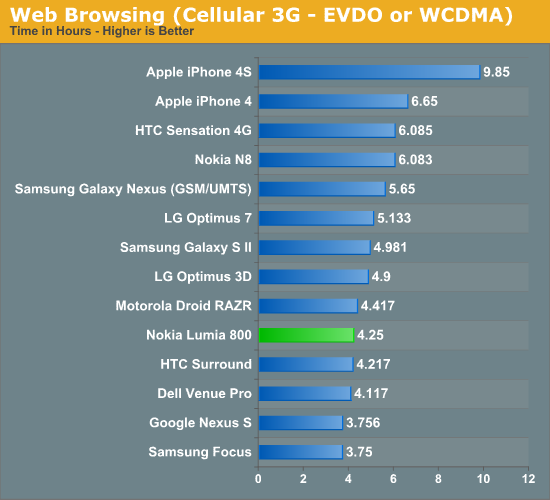 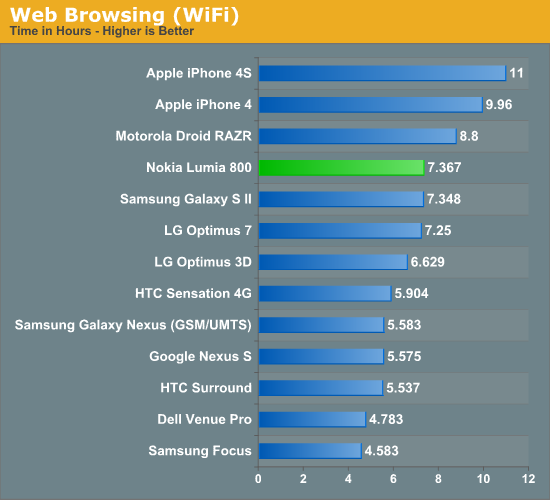 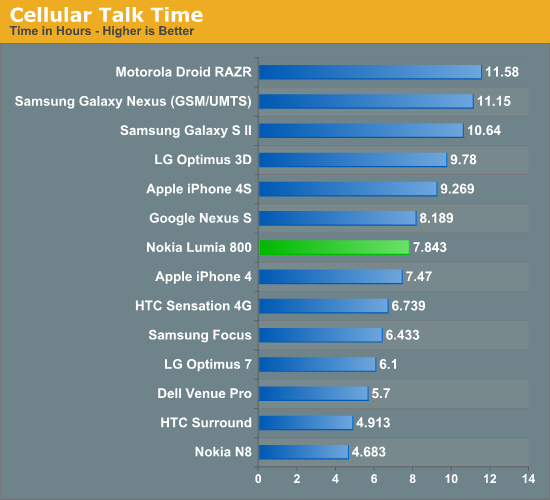 The Lumia leads the pack of WP7 devices we’ve tested in two out of the three categories, but lags the LG Optimus 7 when it comes to loading pages on cellular data. I’m decently impressed with how well the Lumia does considering its 1450mAh (5.37 Whr) battery, yet it could be better. Having an AMOLED display in conjunction with our primarily white background webpages from the page loading suite definitely makes an impact. I can’t help but wonder whether these numbers will improve or not after Nokia also updates firmware and fixes some of the battery life bugs have been publicly acknowledged.

I noticed some other subtle behavior while testing the Lumia 800. A new feature in WP7.5 “mango” is the addition of a battery saver tab under settings which optionally allows automatic pausing of background data and dimming of the display when battery gets low. In this menu you can also view battery percentage and some estimates of battery life remaining based on historical use. With the second updated Lumia 800, the phone turns off at 5%, presumably to mitigate the reboot loop that sometimes results if the phone is discharged to 0%. So there’s at least an extra 5% of battery life hanging around that no doubt will be exposed with the eventual update.