With the 6000 series AMD upgraded their DisplayPort capabilities from DP 1.1 to DP 1.2. With Southern Islands AMD will be upgrading their HDMI capabilities. Currently AMD supports a subset of the complete HDMI 1.4a specification; they can drive S3D displays (the killer feature of 1.4a), but that’s the only thing out of 1.4a they support. HDMI also introduced support for 4K x 2K displays, but both displays and devices that can drive them have been rare. As displays start to become available so too does support for them with AMD’s products.

As per the relevant specifications, both DP 1.2 and HDMI 1.4a can drive 4K x 2K displays, but with the 6000 series the hardware could only handle such a display over DP 1.2. With HDMI it was an issue of bandwidth, as HDMI is based on DVI and uses the same TMDS signaling technology. At normal speed HDMI only has as much bandwidth as single-link HDMI (~4Gbps) which is not enough to drive such a large display. DVI solved this with dual-link DVI, whereas as of HDMI 1.3 the HDMI consortium solved this by tightening their cable specifications to allow for higher clocked transmissions, from 165MHz up to 340MHz. 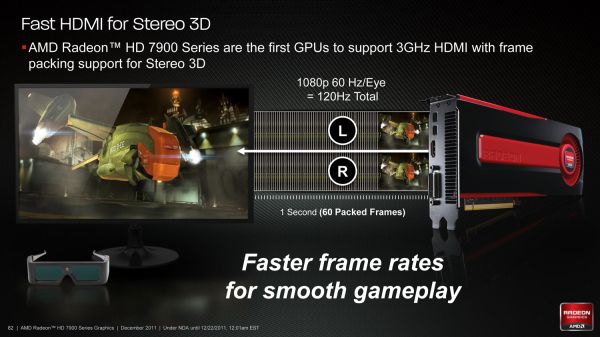 It’s this higher transmission speed that AMD is adding support for in Southern Islands. AMD calls this Fast HDMI technology, which as near as we can tell is not any kind of HDMI trademark but simply AMD’s branding for high speed HDMI. With Fast HDMI AMD will be able to drive 4K x 2K displays over HDMI – which looks like it will be the common connector for TVs at those high resolutions – along with being able to support 1080P S3D at higher framerates with next-generation TVs. Currently AMD’s cards and TVs alike can only handle 1080P frame packed S3D at up to 48fps (24Hz/eye), or with a bit of hacking up to 60fps (30Hz/eye), which is fine for 24fps movies but much too low for gaming. As next-generation TVs add support for 1080P frame packed S3D at 120fps (60Hz/eye) Southern Islands products will be the first AMD products able to drive them over HDMI through the use of Fast HDMI.

The only remaining questions at this point are just how high does AMD’s Fast HDMI clock (they don’t necessary have to hit 340MHz), and if AMD will add support for any other features that higher bandwidths enable. AMD says that Southern Islands supports “3GHz HDMI”, which appears to be a misnomer similar to how we commonly refer to GDDR5 by its “effective clockspeed” in GHz, even though that’s not actually how it operates. In which case with Fast HDMI AMD may be referring to the maximum throughput per channel, which at 300MHz would be 3Gbps. 300Mhz would still be enough to implement features such as Deep Color (48bpp) over most current resolutions.