So we wanted to take a quick look at synthetic performance to see what these tools had to say about AMD’s changes. We’ve included the numbers for every other GPU in our lineup as a reference point, but we would strongly suggest against reading into them too much. AMD versus AMD is sometimes relevant to real world performance; AMD versus NVIDIA rarely is. 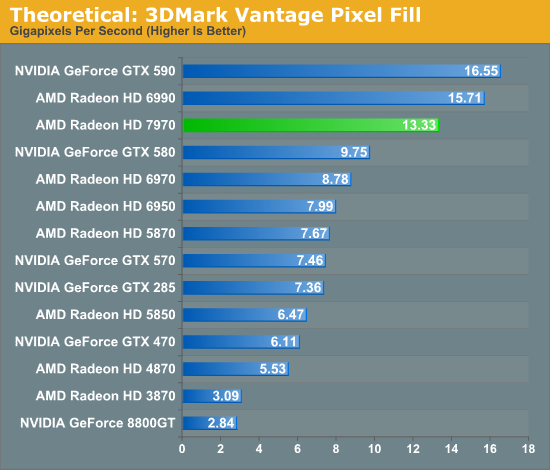 We’ll start with 3DMark Vantage and its color fill test. This is basically a ROP test that attempts to have a GPU’s ROPs blend as many pixels as it can. Theoretically AMD can do 32 color operations per clock on Tahiti, which at 925MHz for 7970 means the theoretical limit is 29.6Gpix/sec; not that any architecture is ever that efficient. In practice 7970 hits 13.33Gpix/sec, which is still well short of the theoretical maximum, but pay close attention to 7970’s performance relative to 6970. Even with the same number of ROPs and a similar theoretical performance limit (29.6 vs 28.16), 7970 is pushing 51% more pixels than 6970 is.

In designing Tahiti AMD said that they didn’t need more ROPs they just needed more efficient ROPs, and it looks like they’ve delivered on this. It’s not clear whether this is the limit for efficiency or if AMD can squeeze more out of their ROPs in future designs, but this definitely helps to prove that there’s more to graphics rendering than a large number of functional units. 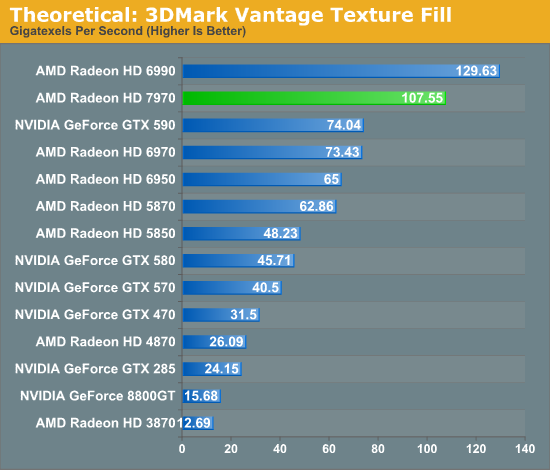 Our other 3DMark synthetic benchmark is the 3DMark Vantage Texture Blend test, which measures how quickly a GPU can blend multiple FP16 textures. This is more synthetic than most tests because FP16 textures aren’t widely used, but it’s a consistent benchmark.

The theoretical performance improvement from 6970 to 7970 is 40% - 33% more texture units operating at a 5% higher clockspeed. In practice the 7970 exceeds that improvement by increasing texture performance by 46%, meaning the 7970 has benefitted from more than the increase in texture units. Most likely the new cache architecture has further improved the efficiency of the texture units, although the 3DMark texture set is not particularly large.

Moving on, we also wanted to take a look at tessellation. AMD did not increase the theoretical geometry performance of Tahiti as compared to Cayman – both top out at 2 triangles per clock – but AMD has put a lot of effort into improving the efficiency of Tahiti’s geometry units as we’ve seen reflected in our game benchmarks. 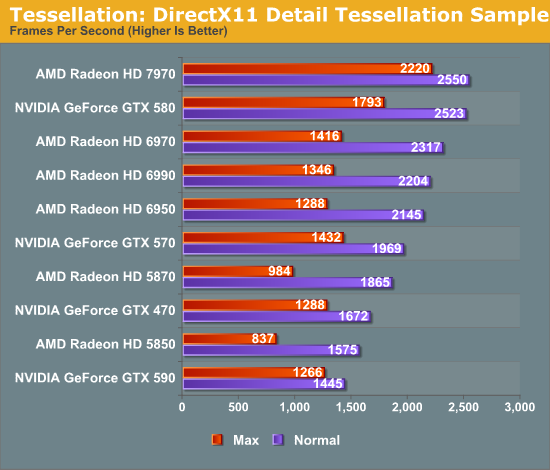 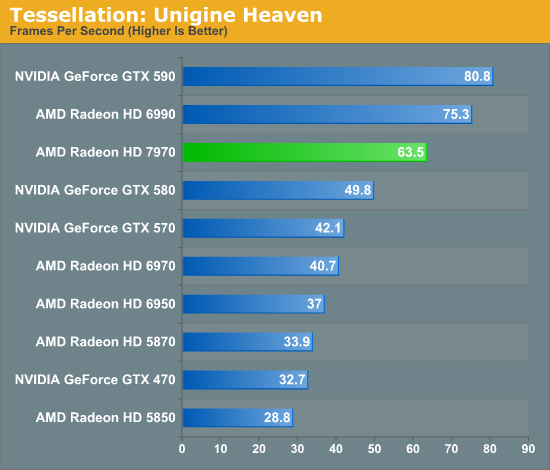 Our second tessellation benchmark is Unigine Heaven, a benchmark that straddles the line between a synthetic benchmark and a real-world benchmark, as the engine is licensed but no notable DX11 games have been produced using it yet. In any case the Heaven benchmark is notable for its heavy use of tessellation, which means it’s largely a proxy test for tessellation performance.

As with the Detail Tessellation sample program, Heaven shows significant gains for the 7970 versus the 6970, with the 7970 leading by 56%. Meanwhile it leads the GTX 580 by 27%, which is actually slightly better than what we saw under the more “pure” Detail Tessellation sample. Between these two benchmarks it’s clear that AMD’s tessellation efficiency improvements are quite real, and that with Tahiti AMD can deliver much better tessellation performance than Cayman even at virtually the same theoretical triangle throughput rate.

Of course one has to wonder what NVIDIA will have in store for Kepler next year. Their current Fermi design seems to scale well with additional geometry units, but if Tahiti is anything to go by, there’s a great deal to be gained just by focusing on efficiency. NVIDIA has prided themselves on their geometry performance since before GF100 even shipped, so it will be interesting if they have anything in store to hold on to that distinction.