We’ve already outlined much of what there is to say about the combination of Qualcomm’s MDM6600 and Motorola’s on Wrigley LTE baseband inside the Droid Bionic review, but it still bears going over. Just like the Bionic, MDM6600 handles 1x voice and data, EVDO Rev.A 3G data, and Wrigley supplies LTE connectivity. In fact, the RAZR has a virtually identical cellular architecture to the Bionic, at least as far as I can tell. There’s the same Infineon transciever for LTE, Skyworks 700 MHz power amp, and combination MCP DRAM+NAND packages for the MDM6600 and Wrigley basebands. 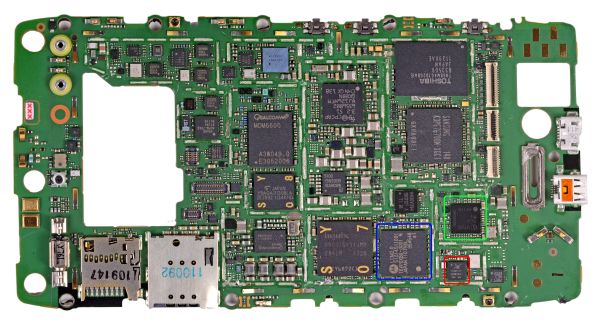 I wasn’t totally satisfied in the Bionic piece that I proved the Wrigley baseband was UE Category 2, so I did some more poking this time with the RAZR and found the same exact architecture for administration and configuration as previously. Wrigley is actually a very interesting little part, consisting of an ARM926EJ-S running at 380 MHz:

Oddly enough there are many places where it refers to itself as a “3G Datacard” even though it’s clearly designed only to work with LTE. The thing is just running GNU Linux:

The reality is that almost all black boxes inside mobile phones end up revealing something similar at their heart if you poke around enough. If we were counting the number of ARM parts onboard your average smartphone I wouldn’t be surprised to see at least 4 or 5 different ARM cores.

Anyhow, the RAZR doesn’t have a nice mib default xml file that nicely spells out the LTE UE category like the Bionic did, but the default set of mibs being set does include the Verizon EARFCN of 5230 which corresponds to LTE band 13. After lots of poking around, I found a way to query the UE category directly:

So life is good and our earlier claims that Motorola Wrigley (with lots of TI references inside) is indeed LTE UE Category 2. As a reminder, other devices based on MDM9x00, LG L2000, and Samsung’s CMC220 are UE Category 3.

Oddly enough, just like the Bionic the official FCC filing summary information for the LTE side of the RAZR erroneously states that it is UE Category 1. As usual we get the normal pretty diagram with the location of antennas, and interestingly enough the LTE antenna is up at the top on the RAZR instead of in a combined module at the very bottom. 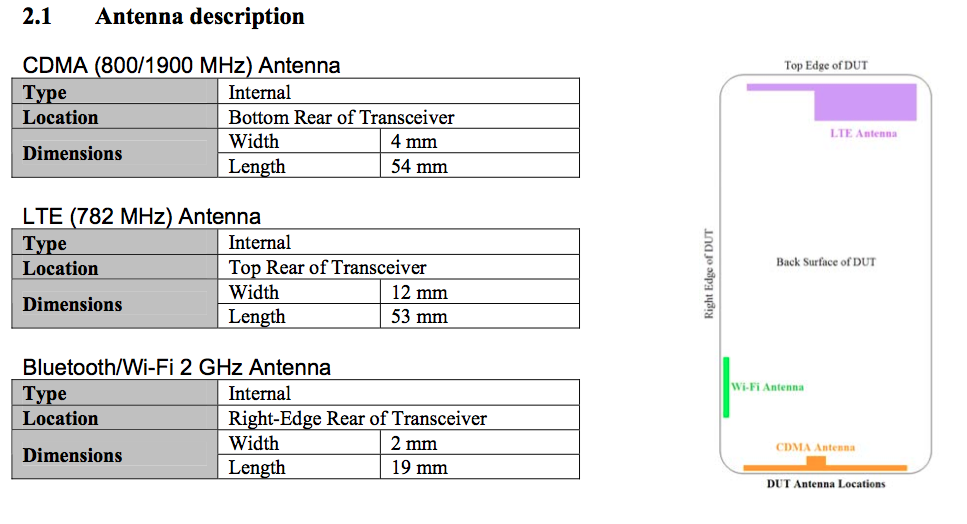 We’ve been doing a pretty good job keeping track of cellular throughput by running a bunch of speedtests, getting that data off, and making some graphs. The RAZR isn’t spared this treatment at all, and I ran 510 tests on Verizon 4G LTE in my own market in Tucson AZ and while on a trip to Los Angeles, CA. 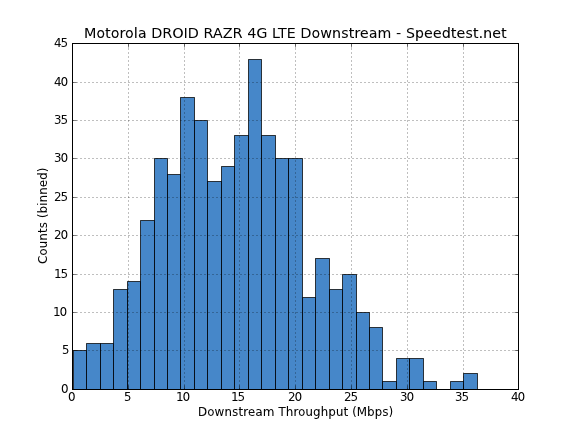 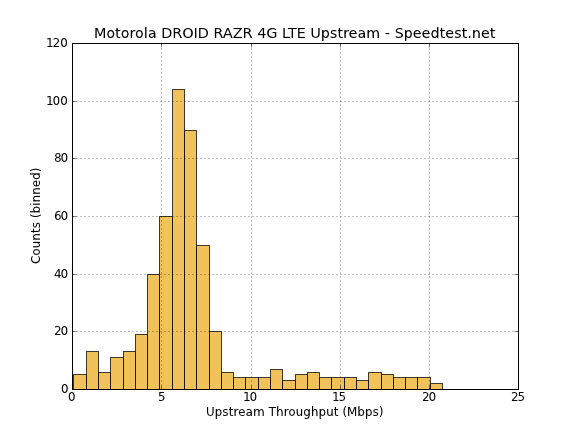 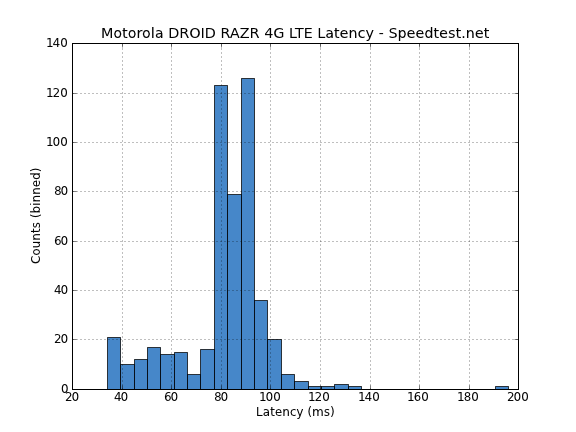 The histograms themselves look a lot like what we’ve seen already out of Verizon’s 4G LTE network on other smartphones, which again uses 10 MHz FDD on LTE band 13. I’ve seen numerous other people hit speeds above 50 Mbps on category 3 devices in favorable network conditions, but obviously the RAZR being category 2 does preclude it hitting those speeds.

Like the Bionic, the RAZR also gives you a nice and easily accessible network option to use either LTE/CDMA or just CDMA. Unfortunately again there’s no way to force data on only LTE and avoid handing over, but in practice I rarely saw the RAZR do a hard handover unless network conditions completely precluded using LTE.

I was pleased with myself when I used the Bionic that it was possible to look at LTE signal power (RSCP) and the channel quality indicator (CQI) by just running logcat and grepping the radio status daemon that Motorola wrote for updating their bar visualization. Unfortunately in this newer version of Blur that logging debug output and functionality is no longer, and if you look closely you’ll also notice they went from 4 bars to 5. There’s another way to view those metrics but it involves having shell on the baseband and directly querying the MIBs that correspond to all the LTE signal quality figures of merit. It’s still possible but much more involved. The upside of course is that I was able to confirm the RAZR correctly reports those bars based on signal power and quality, unlike most of the other LTE handsets which just look at power.

Lastly, the Droid RAZR XT912 Motodev page notes that the phone has WCDMA 850/900/1900/2100 connectivity courtesy of the MDM6600. However, the shipping Droid RAZR has WCDMA disabled and corresponding lines commented out inside build.prop for the WCDMA components. Considering the existence of the RAZR XT910 (sans “Droid”) with WCDMA and GSM I think it’s fairly easy to predict that a world mode variant with LTE is coming sooner rather than later. I wouldn’t mind having a RAZR that works on AT&T WCDMA, that’s for sure.