The RAZR is the first Motorola device to ship with an AMOLED panel, and in this case they’ve coined their 4.3” diagonal qHD (960x540) display Super AMOLED Advanced. True to AMOLED naming monikers, this panel includes RGBG PenTile (the absence of “Plus” tells you this one) and Advanced apparently now connotes qHD.

It seems like PenTile is something that mainstream press has finally become aware of, and for whatever reason, the RAZR served as lightning rod for others to voice their discontent with the non-RGB stripe subpixel rendering layout. Maybe it’s because the phone isn’t Samsung-branded (although ironically it is undoubtably manufactured by Samsung), but something about the RAZR display caused more than the usual scrutiny. I think a little bit of a history lesson is in order - since the original Atrix, Motorola has been shipping qHD LCD panels with the RGBW variant of PenTile. The fourth white subpixel helps the LCD system be more efficient - especially when displaying black text on a white background. In that system, luminance gets mapped to the white subpixel, chrominance to RGB.

In AMOLED land thus far we’ve only seen RGBG PenTile or RGB subpixel matrixes. By taking advantage of the human visual system’s differing frequency response with respect to wavelength (eg we can detect higher spatial frequencies in the green), the system can emulate a higher resolution system with fewer subpixels. First and second generation AMOLED (“AMOLED” on the Nexus One and others, then Super AMOLED on the Galaxy S / Nexus S) drove an effective resolution of WVGA (800x480) at 3.7” and then 4”, and it was here that subpixels were big enough to pick out with the naked eye, especially on solid colors or single pixel thickness elements.

The thing that gets left out of most discussions about the RAZR’s display is that although RGBG is used, the subpixels have a different geometry than their RGBG first and second generation (AMOLED and Super AMOLED) partners from Samsung. Previously, green subpixels were noticeably thinner than their R and B partners. In this new matrix, they’re much closer to being same size (this also applies to the Galaxy Nexus and any of the new Samsung AMOLED panels that don’t use RGB stripes).

With respect to the RAZR, the combination of this more uniform subpixel geometry and higher effective resolution (qHD) at 4.3” makes RGBG PenTile nowhere near as visually noticeable as it was on phones like Galaxy S. I originally tweeted that I found the RAZR display visually different than other AMOLED panels with RGBG, and this is what I was referring to. Subjectively I’d even say that the RAZR has less characteristic PenTile grain than the RGBW LCD variants I’ve seen recently.

Of course the other side of the story is color rendering and accuracy. One of the most frustrating things with AMOLED that has existed in virtually every iteration is how white point varies sometimes wildly as a function of panel brightness. If you use auto brightness (which I wager almost everyone does to save battery), it can change dramatically and be accentuated by ambient lighting changes that accompany. I set out to measure how much change there is a while ago, and continue measuring brightness, contrast, and white point at different brightness percentages as set in the UI. 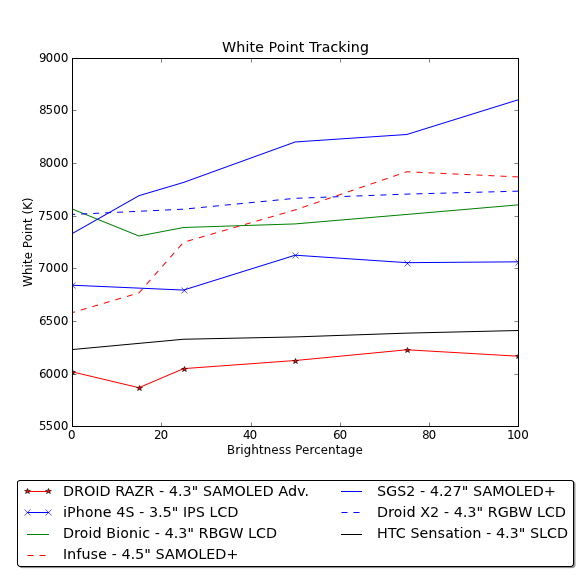 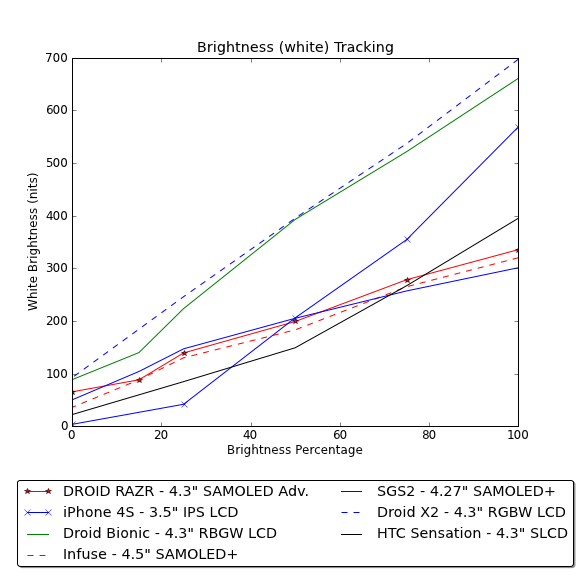 Like virtually all AMOLED displays I’ve seen, there’s subjective variance in appearance as a function of brightness. On the RAZR, the measurements with our i1D2 belies how big this is, and at the absolute lowest brightness settings greys can look somewhat green. Again we’ve seen this behavior on numerous AMOLED displays. 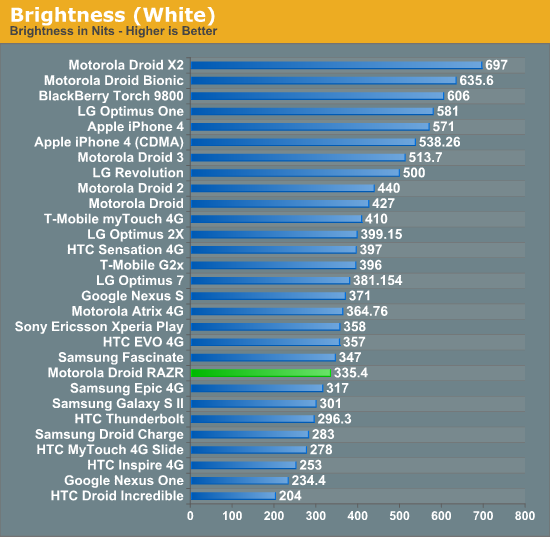 I also threw the RAZR at Color HCFR and took measures with Francois’ excellent voodoo screen test patterns application at 100% brightness. The results from a complete run (results in .chc format are here if you want them) are interesting. Starting with the CIE chart, we see the kind of oversaturation that has been long talked about with respect to AMOLED - the inside triangle is the sRGB standard, outside are primary and secondary measures. 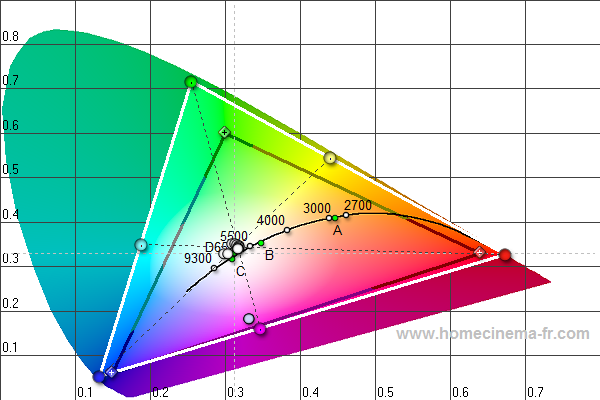 Color temperature straddles 6500K and mirrors what measures I took and mentioned elsewhere, of course here we’re looking at it at different IRE values. Likewise, gamma is way above 2.2 and instead average 2.6. 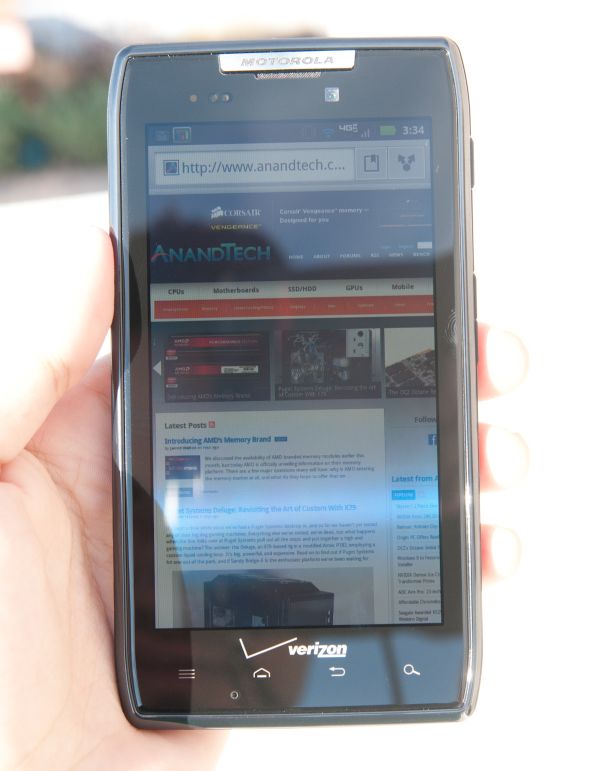 I also haven’t seen the RAZR throw a display overheat warning and clamp display brightness either, which is more than I can say for virtually all of the SGS2 variants that I've seen, all of which will throw the overheat error if left in direct sunlight in my climate for too long. 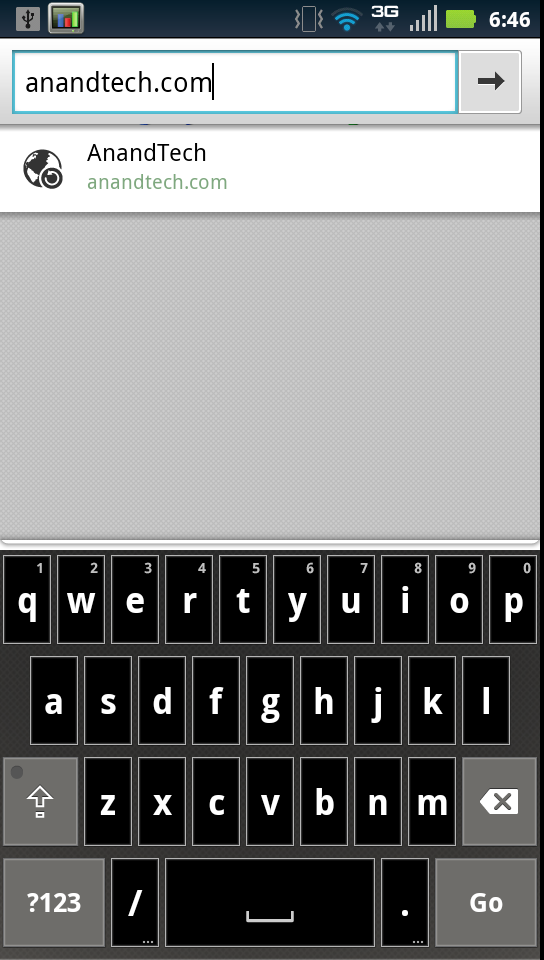 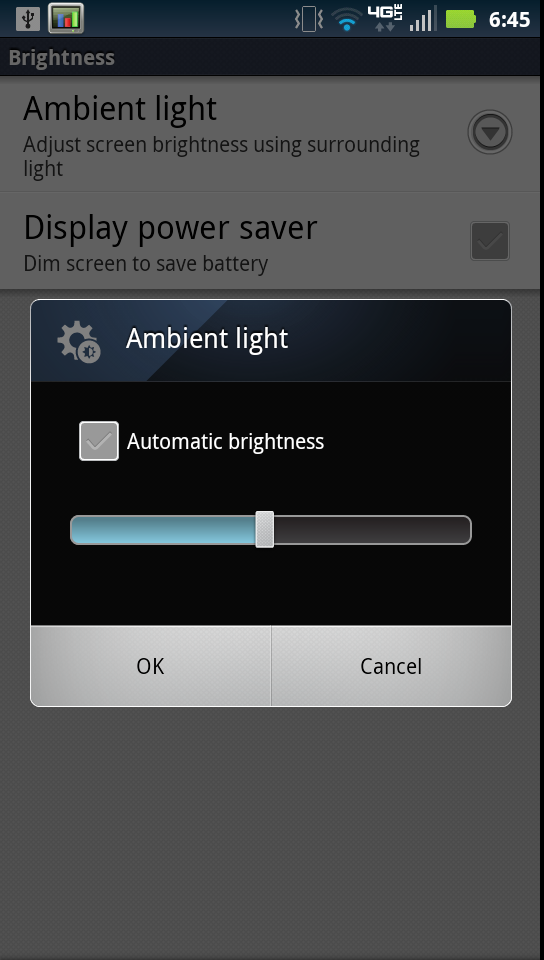 There's two other little things to make note of. First, Motorola made a change to its standard multitouch keyboard and changed the keys to black - this is an interesting and nice little extra feature that might save a bit of battery power. Again, black on AMOLED literally corresponds to the pixels not emitting any light. Last, there's a display power saver checkbox which dims the screen when displaying darker content to save battery - this isn't any surprise, but it's just noteworthy that Samsung isn't alone in including sort of a dynamic contrast function in the guise of saving some battery.