The original Transformer had a display that performed similarly to the iPad, but was far more reflective thanks to a fairly large gap between the outer glass and the LCD panel underneath. I excused the first generation Eee Pad in the display department because it was good enough and $100 cheaper than the competing Apple solution. The Prime reaches price parity with the iPad 2, and as a result it must meet a higher standard. ASUS doesn't disappoint - the Eee Pad Transformer Prime has the best display I've seen on a tablet to date.

The resolution is a Honeycomb-standard 1280 x 800. The 16:10 panel measures 10.1-inches diagonally, giving it a very similar surface area to the iPad 2's 9.7-inch 4:3 display. The increase in resolution more than makes up for the larger screen however, ASUS delivers 145 pixels per inch compared to the iPad 2's now quite-dated ~132 PPI.

It's not all about pixel density here, the Transformer Prime has better white and black levels than anything else in its class. It also sets the new benchmark for contrast ratio at nearly 1200:1. The huge gap between the outermost glass and the IPS LCD panel has been reduced significantly, in turn reducing glare. 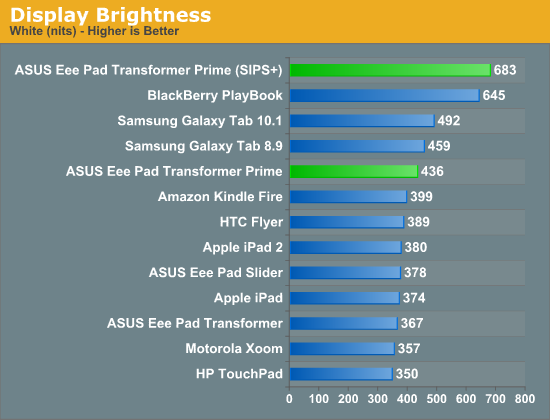 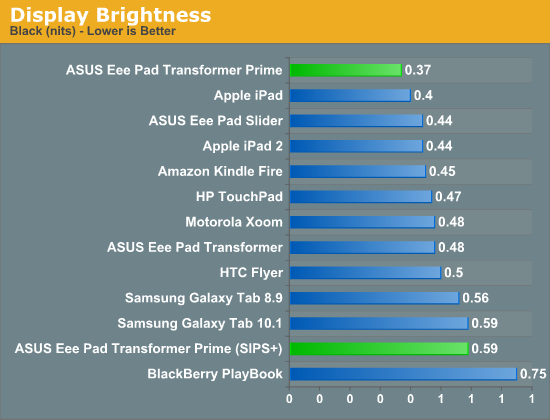 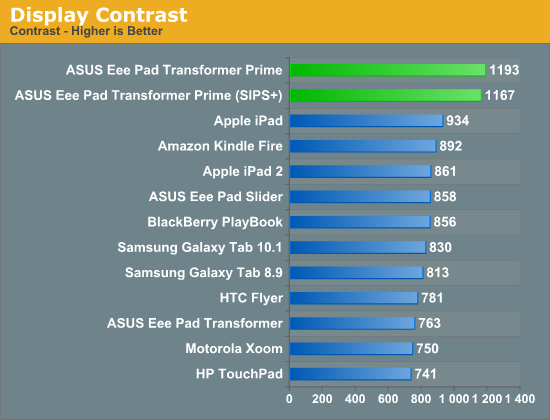 ASUS also has a Super IPS+ mode that drives the display to a class-leading 683 nits. The Super IPS+ mode obviously draws more power but ASUS recommends it if you're trying to use your tablet outdoors. In our review of the PlayBook we found that 600 nits was really the cutoff for usability in sunny conditions, and ASUS easily exceeds that. It's also worth pointing out that while Super IPS+ increases black levels as well, the resulting contrast ratio remains the same. 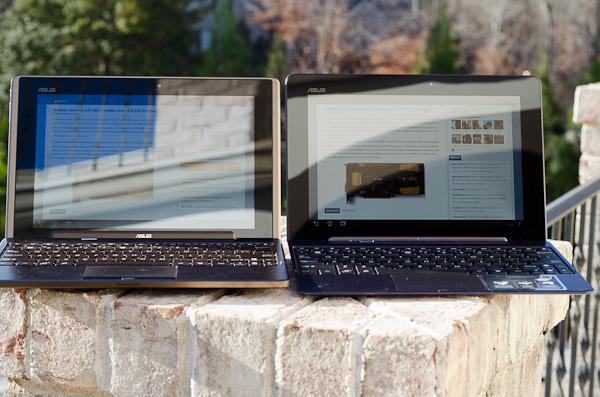 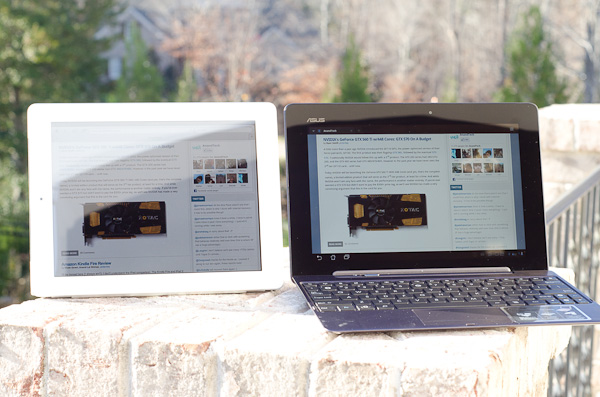 Viewing angles are absolutely awesome. Yes this is the same ASUS that let us down with the UX panels but it definitely got the panel right when it came to the Transformer Prime. Fingerprints are still going to be evident on the display but they don't seem to be as bad as on the original Transformer, and they do wipe off easily. This time around ASUS bundles a microfiber cloth to aid in keeping your Transformer looking fresh.

ASUS, Apple and the rest of the tablet world are in hot pursuit of even higher resolution panels, the problem is yields on these small 1080p and 2048x1536 panels just aren't high enough yet. The Android crowd will have to wait, although Apple is apparently pushing very hard (and trying to buy up a lot of inventory) to deliver a "retina display" equipped iPad 2+/3 by Q2 next year. I'm hearing Q3/Q4 for everyone else and it's still not a guarantee that Apple will be able to meet its aggressive targets either at this point.