TrueCrypt is a software application used for on-the-fly encryption (OTFE). It is free, open source and offers full AES-NI support. The application also features a built-in encryption benchmark that we can use to measure CPU performance. First we test with the AES algorithm (256-bit key, symmetric). 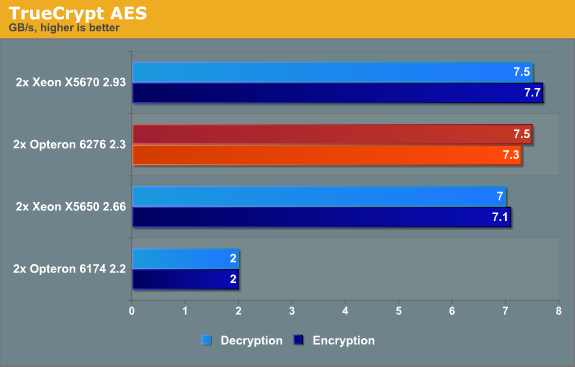 We also test with the heaviest combination of the cascaded algorithms available: Serpent-Twofish-AES. 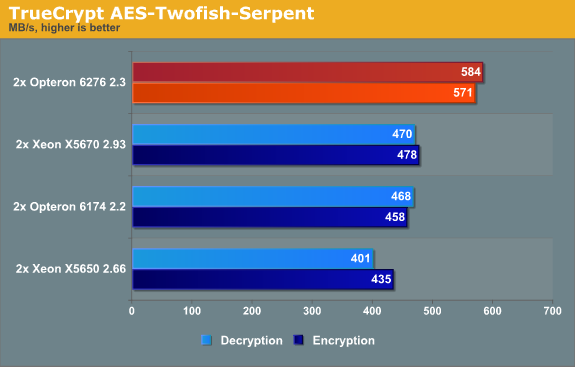 The combination benchmark is limited by the slowest algorithms: twofish and serpent. The huge advantage that the architectures (Opteron "Bulldozer" and Xeon "Westmere") which support AES-NI had has evaporated: the Opteron 6174 keeps up with the best Xeons. The Opteron 6276 can leverage its higher threadcount as this benchmark scales extremely well.

It is good to realize that these benchmarks are not real-world but rather synthetic. It would be better to test a website that does some encrypting in the background or a fileserver with encrypted partitions. In that case the encryption software is only a small part of the total code being run. A large performance (dis)advantage might translate into a much smaller performance (dis)advantage in that real-world situation.

For example, eight times faster encryption resulted in a website with 23% higher throughput and a 40% faster encrypted file (see here). The advantage that the Xeon had in the first benchmark will not be noticeable, and the Opteron's 24% higher performance will translate into a few percentage points. But this is a benchmark where AMD's efforts to get a 16 integer cores inside a 115W TDP pay off.

7-zip is a file archiver with a high compression ratio. 7-Zip is open source software, and most of the source code is under the GNU LGPL license 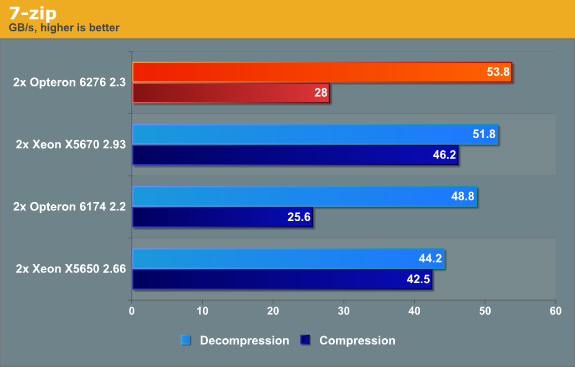 Compression is more CPU intensive than decompression, and the latter depends a little more on memory bandwidth. When it comes to load/stores and memory bandwidth, the Opteron 6276 is unbeateable. We've also seen indications that Bulldozer's cache does very well in reads but not so well in writes, and that could account for some of the gap between the compress/decompress results.