Apple hasn’t spared upgrading WLAN connectivity on the 4S, though the improvement isn’t quite as dramatic as what I was hoping for. The 4S uses BCM4330, Broadcom’s newest WLAN, Bluetooth, and FM combo chip (though the latter still isn’t used). We’ve seen this particular combo chip in the Samsung Galaxy S2, and no doubt BCM4330 will start popping up a lot more in places where its predecessor, BCM4329 was used, which was everything from the 3GS to the 4 and in virtually innumerable Android devices. BCM4330 brings Bluetooth 4.0 support, whereas BCM4329 was previously Bluetooth 2.1, and still includes the same 802.11b/g/n (2.4 GHz, single spatial stream) connectivity as the former, including only tuning 20MHz channels (HT20). I was hoping that the 4S would also include 5 GHz support, after seeing SGS2 include it, however the 4S still is 2.4GHz only. 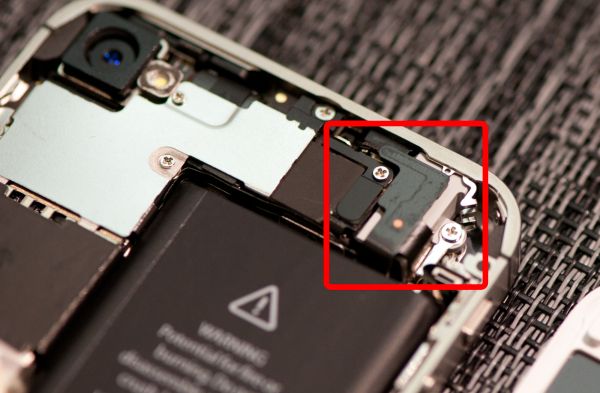 In addition, the 4S locates the WiFi antenna in the same place as the CDMA iPhone 4. If you missed it back then, and have read the previous cellular connectivity section, you’re probably wondering where the WiFi and Bluetooth antennas went, given the absence of a stainless steel band for them. The answer is inside, printed on a flex board, like virtually everyone else does for their cellular antennas. It’s noted on the FCC-submitted schematic, but I also opened up the 4S I purchased and grabbed a picture.

Given the small size of this antenna, you might be led (deceptively) to think it has worse sensitivity or isotropy. It’s interesting to me that this is actually not the case. Subjectively, I measured slightly better received signal strength on the 4S compared to a 4 side by side, and upon checking the FCC documents learned the 4S’ WLAN antenna has a peak gain of –1.5 dBi compared to –1.89 dBi on the 4, making it better than the previous model. That said, the two devices have approximately the same EIRP (Equivalent Isotropically Radiated Power) for transmit when you actually work the math out. 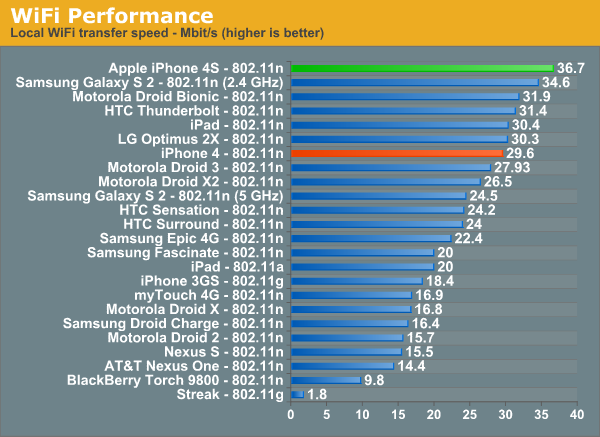 Moving to a newer WLAN combo chip helps speed WiFi throughput up considerably in our test, though I’m starting to think that the bigger boost is actually thanks in part to a faster SoC. As a reminder, this test consists of a 100MB PDF hosted locally loaded over 802.11n (Airport Extreme Gen.5), throughput is measured on the server. On MobileSafari, the PDF document is loaded in its entirety before being rendered, so we’re really seeing WiFi throughput.

The iPhone 4 previously used a BCM4750 single chip GPS receiver, and shared the 2.4 GHz WiFi antenna as shown many times in diagrams. We reported with the CDMA iPhone 4 that Qualcomm’s GPS inside MDM6600 was being used in place of some discrete solution, and showed a video demonstrating its improved GPS fix. I suspected at the time that the CDMA iPhone 4 might be using GLONASS from MDM6600 (in fact, the MDM6600 amss actually flashed onto the CDMA iPhone 4 includes many GLONASS references), but never was able to concretely confirm it was actually being used.

MDM6610 inside the 4S inherits the same Qualcomm GNSS (Global Navigation Satellite System) Gen8 support, namely GPS and its Russian equivalent, GLONASS. The two can be used in conjunction at the same time and deliver a more reliable 3D fix onboad MDM6610, which is what the 4S does indeed appear to be using. GPS and GLONASS are functionally very similar, and combined support for GPS and GLONASS at the same time is something most modern receivers do now. There are even receivers which support the EU’s standard, Galileo, though it isn’t completed yet. This time around, Apple is being direct about its inclusion of GLONASS. The GPS inside MDM6610 fully supports standalone mode, and assisted mode from UMTS, GSM, OMA, and gpsOneXTRA.

Just like with the CDMA iPhone 4, I drove around and recorded a video to illustrate GPS performance, since unfortunately iDevices still don’t report direct GPS NMEA data. The 4S has a very constant error radius circle in the Maps application and shows little deviation while traveling, whereas the 4 sometimes wanders, changes horizontal accuracy, and velocity. In addition, the 4S GPS reports the present position in the proper lane the whole time as well, while the 4 is slightly shifted. I don’t think many people complained about the GPS performance on the 4, but both time to fix and overall precision are without a doubt improved over the GSM/UMTS 4. Subjectively, indoor performance seems much improved, and I’ve noticed that the iPhone 4S will report slightly better horizontal accuracy than the 4 (using MotionX-GPS on iOS) indoors. Unfortunately we can’t perform much more analysis since again real NMEA data isn’t presented on iOS, instead location is abstracted away using Apple’s location services APIs.

The iPhone 4 included a discrete Audience noise processor and second microphone for doing some advanced common mode noise rejection. This reduced the amount of background noise audible to other parties when calling from a noisy environment, and is a feature that virtually all of this latest generation of smartphones has included. The 4S still includes that second microphone (up at the top, right next to the headset jack), though the discrete Audience IC is gone. It’s possible that Audience has been integrated into the A5 SoC itself, or elsewhere, or the 4S is using Qualcomm’s Fluence noise cancelation. I spent considerable time digging around and couldn’t find anything conclusive to indicate one possible situation over the other.

We recently started measuring noise rejection by placing a call between a phone under test and another phone connected to line-in on an audio card, then ramping volume up and talking into the handset. The 4S doesn’t get spared this treatment, and I’ve also included the 4 and 3GS (which has no such common mode noise rejection) for comparison.

Subjectively, the 4S has further improved ambient noise rejection over the 4. I ran this test twice to make sure it wasn’t a fluke, and indeed the 4S subjectively has less noticeable ambient noise than the 4 even at absurd volume levels.

We’ve also placed the usual test calls to the local ASOS weather station and recorded the output. I can’t detect any difference in line-out quality of the voice call for better or worse, at least on GSM/UMTS. I’d expect the 4S to offer exactly the same quality on CDMA as the CDMA iPhone 4.

One thing I should note is that there does seem to be a bit more perceptible line noise on the 4S’ earpiece when on phone calls. It isn’t a huge difference, but there is definitely a bit more background noise on the 4S earpiece than the 4 in calls. The original 4S that Anand purchased had a noticeable and distracting amount of background noise, though swapping that unit out seems to have somewhat mitigated the problem (he still complains of audible cracking via the earpiece during calls). I’ve tested enough iPhone 4 handsets (and been through several) to know that there is a huge amount of variance in earpiece quality, (even going through one with an earpiece that sounded saturated/overmodulated at every volume setting), so I wager this might have been what was going on.