The iPhone 4 shot excellent quality 720p30 video and remained arguably the best in that category for a considerable run. Recently though it has been outclassed by smartphones that are shooting 1080p30 with impressive quality which record 720p30 just as well. The 4S catches back up on paper and likewise can capture video at 1080p30. Like every prior iDevice, there are no toggles to change video capture size - it’s always at the device’s maximum quality - 1080p30. Apple also made note of their own gyro-augmented electronic stabilization which the 4S brings. Practically every other smartphone we’ve seen has likewise included some electronic stabilization which leverages the pixels around the target 1080p or 720p area.

We’ve captured videos from the 4S in the dual camera mount alongside the 4, an SGS2, and a reference Canon Vixia HF11 for comparison. I also shot a low light comparison between the 4 and 4S. Showing the differences in video between all of those is something of a challenge, so I’ve done a few different things. First, you can grab the native format 4S versus 4 videos here (442 MB) and the 4S versus SGS2 video here (289 MB).

It’s hard to compare those side by side unless you have multiple instances of VLC open and hit play at the same time, so I also combined and synchronized the comparison videos side by side. The frame is 4096x2048 so we can see actual 1080p frames side by side. Though I realize 4K displays are hard to come by, you at least can see full size images which I’ve synchronized.

It’s readily apparent just how much more dynamic range the 4S has over the 4 when you look at the highlights and dark regions. In addition, the 4S does indeed have better white balance, whereas the 4 changes its white balance a few times as we pan left and right through different levels of brightness and ends up looking blue at the very end of the first clip.

Then comes the SGS2 comparison, and I start out with some unintentional shake where you can really see the 4S’ anti shake kick in. I considered the SGS2’s electronic anti shake pretty good, however its narrower field of view in 1080p capture exacerbates the shaking. Subjectively the two are pretty closely matched in terms of video quality, but the SGS2 runs its continual auto focus a lot and has a few entirely unfocused moments. The 4S’ continual auto focus is much more conservative and often requires a tap to refocus.

The Vixia HF11 comparison gives you an idea how the 4S compares to a consumer level camcorder shooting in its own maximum quality mode. I’d say the 4S actually gives it a run for its money, surprisingly enough, though the 4S (like every smartphone) still has rolling shutter in movement. Finally I shot a low light side by side with the 4S and 4, again white balance is better, but the 4S video in this mode looks a bit noisier than the 4. In addition, the 4S exhibits more lens flaring (something I noticed while shooting stills as well) than the 4.

Subjectively video quality from the 4S is very good, but it falls short in other ways. The 4S shoots video at 1080p30 baseline with 1 reference frame at 24 Mbps, with single channel 64 Kbps AAC audio. If you’ve been following our smartphone reviews, you’ll know that although this is the highest bitrate of any smartphone thus far (Droid 3 we’ve seen at 15 Mbps, SGS2 at 17 Mbps), it’s just baseline and not high profile we’ve seen on Exynos 4210 or OMAP4. In addition, two channel audio is becoming a new norm.

Media Info from video shot on the iPhone 4S

The result is that Apple is compensating for lower encoder efficiency (quality per bit) by encoding their 1080p video at a higher bitrate. Other players are getting the same quality at lower bitrates by using better high profile encoders. We dug a little deeper with some stream analysis software, and it appears that Apple’s A5 SoC is using the same encoder as the A4, complete with the same CAVLC (as opposed to CABAC which the other encoders in OMAP4 or Exynos 4210) and efficiency per frame size. It’s just a bit unfortunate, since the result is that video shot on the 4S will use ~40% more space per minute compared with 1080p30 video shot on other platforms (180 MB for 1 minute on the 4S, 128 MB for 1 minute on the SGS2, and 113 MB for 1 minute on OMAP4). 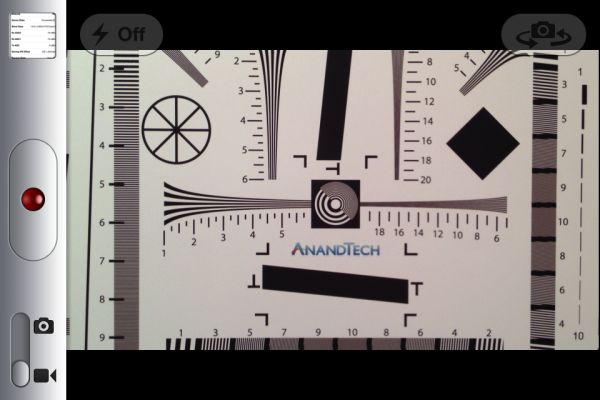 One last thing to note is that Apple roughly keeps the same cropped field of view size as the 4 on the 4S when shooting video. You can see this behavior in the rollover above. The 4S field of view is just slightly narrower than the 4. Note that the actual area reported from the sensor when in video capture mode is almost always a crop (sometimes with a 2x2 binning) of the full sensor size with some pixels around the frame for image stabilization.