In the basement of the Palo Alto, California headquarters, three Facebook engineers built Facebook's custom-designed servers, power supplies, server racks, and battery backup systems. The Facebook server had to be much cheaper than the average server, as well as more power efficient.

The first change they made was the chassis height, going for a 1.5U high design as a compromise between density and making the server easier to cool. 1.5U allows them to use taller heatsinks, larger (60mm) lower-RPM fans than the screaming 40mm energy hoggers used in a 1U chassis. The result is that the fans consume only 2% to 4% of the total power, which is pretty amazing as we have seen 1U fans that can consume up to one third of the total system power. It seems that air-cooling in the Open Compute 1.5U server is as efficient as the best 3U servers.

At the same time, Facebook Engineering kept the chassis very simple, without any plastic. It makes the airflow through the server smoother and reduces weight. The bottom plate of one server serves as the top plate for the server beneath it.

Facebook has designed an AMD and an Intel motherboard, both manufactured by Quanta. Much attention was paid to the efficiency of the voltage regulators (94% efficiency). The other trick was again to remove anything that was not absolutely necessary. These motherboards have no BMC, very few USB (2) and NIC ports (2), one expansion slot, and are headless (no videochip). 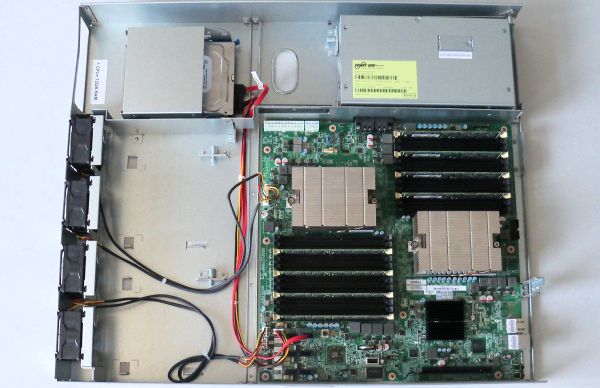 The only thing that an administrator can do remotely is "reboot over LAN". The idea is that if that does not help, the problem is in 99% of cases severe enough that you have to send an administrator to the server anyway.

The AMD servers are mostly used as Memcached servers, as the four channels of AMD Magny-cours Opterons 6100 are capable of using 12 DIMMs per CPU, or 24 DIMMs in total. That works out to 384GB of caching memory. 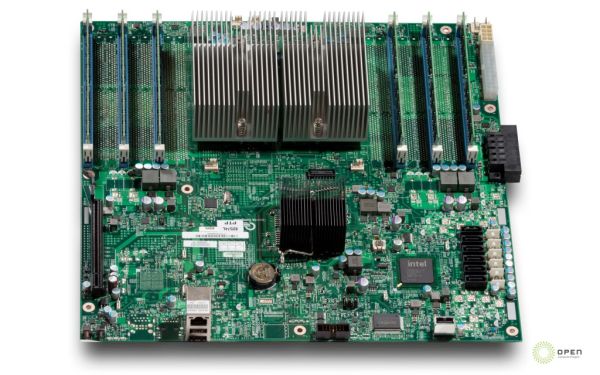 In contrast the Facebook Open Compute Xeon servers only have six DIMM slots as they are used for processing intensive tasks such as the PHP "assembling" data servers.