AMD has been trailing Intel in the x86 performance space for years now. Ever since the introduction of the first Core 2 processors in 2006, AMD hasn't been able to recover and return to the heyday of the Athlon 64 and Athlon 64 X2. Instead the company has remained relevant by driving costs down and competing largely in the sub-$200 microprocessor space. AMD's ability to hold on was largely due to its more-cores-for-less strategy. Thanks to aggressive pricing on its triple and hexa-core parts, for users who needed tons of cores, AMD has been delivering a lot of value over the past couple of years.

Recently however Intel has been able to drive its per-core performance up with Sandy Bridge, where it's becoming increasingly difficult to recommend AMD alternatives with higher core counts. The heavily threaded desktop niche is tough to sell to, particularly when you force users to take a significant hit on single threaded performance in order to achieve value there. For a while now AMD has needed a brand new architecture, something that could lead to dominance in heavily threaded workloads while addressing its deficiencies in lightly threaded consumer workloads. After much waiting, we get that new architecture today. Bulldozer is here.

It's branded the AMD FX processor and it's only available in a single die configuration. Measuring 315mm2 and weighing in at around 2 billion transistors (that's nearly GPU-sized fellas), Bulldozer isn't that much smaller than existing 45nm 6-core Phenom II designs despite being built on Global Foundries' 32nm SOI process. Both die area and transistor count are up significantly over Sandy Bridge, which on Intel's 32nm HKMG process is only 995M transistors with a die size of 216mm2. This is one big chip.

Architecturally Bulldozer is a significant departure from anything we've ever seen before. We'll go into greater detail later on in this piece, but the building block in AMD's latest architecture is the Bulldozer module. Each module features two integer cores and a shared floating point core. FP hardware is larger and used less frequently in desktop (and server workloads), so AMD decided to share it between every two cores rather than offer a 1:1 ratio between int/fp cores on Bulldozer. AMD advertises Bulldozer based FX parts based on the number of integer cores. Thus a two module Bulldozer CPU, has four integer cores (and 2 FP cores) and is thus sold as a quad-core CPU. A four module Bulldozer part with eight integer cores is called an eight-core CPU. There are obvious implications from a performance standpoint, but we'll get to those shortly.

There are a total of 7 AMD FX CPUs that AMD is announcing today, although only four are slated for near-term availability.

The FX-8150, 8120, 6100 and 4100 are what's launching today. The first digit in AMD's FX model numbers indicates the number of cores with the 8150 and 8120 boasting eight, while the 6100 only has six active integer cores (three Bulldozer modules). The FX-4100 features four integer cores. L2 cache scales with core count (2MB per module), while the L3 cache size remains fixed at 8MB regardless of SKU.

North Bridge and L3 cache frequency alternate between 2.0GHz and 2.2GHz depending on the part. TDPs range between 95W and 125W as well, with the FX-8120 being offered in both 125W and 95W versions.

There's only a single Bulldozer die. The 6 and 4 core versions simply feature cores disabled on the die. AMD insists this time around, core unlocking won't be possible on these harvested parts.

The huge gap in clock speed between the 8120 and 8150 are troubling. Typically we see linear frequency graduations but the fact that there's a 16% difference between these two SKUs seems to point to process problems limiting yield at higher frequencies—at least for the 8-core version.

Outside of the quad-core and hex-core Bulldozer pats, the only other FX processor able to exceed the 3.3GHz clock speed of the Phenom II X6 1100T is the 8150. And if you include quad-core Phenom II parts in the mix, only two Bulldozer parts ship at a higher stock frequency than the Phenom II X4 980. Granted Turbo Core will help push frequencies even higher, but these low base frequencies are troubling. For an architecture that was designed to scale to clock speeds 30% higher than its predecessor, Bulldozer doesn't seem to be coming anywhere close.

AMD is certifying its FX processors for use on Socket-AM3+ motherboards. Owners of standard AM3 motherboards may be out of luck, although motherboard manufacturers can choose to certify their boards for use with Bulldozer if they wish to do so. From AMD's perspective however, only AM3+ motherboards with BIOS/UEFI support for Bulldozer are officially supported. 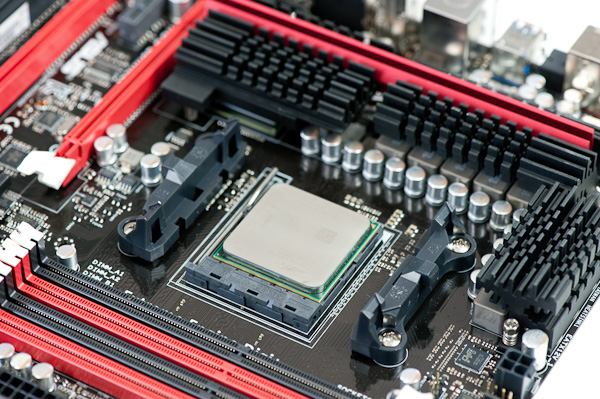 All existing AM2/AM2+/AM3/AM3+ heatsinks should work with the FX processor; they simply need to be rated for the TDP of the processor you're looking to cool.

For this review, AMD supplied us with ASUS' Crosshair V Formula AM3+ motherboard based on AMD's 990FX chipset. 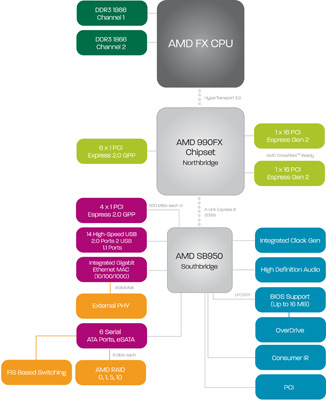 Despite AMD's trend towards releasing APUs with integrated GPUs (thus requiring a new socket), AMD insists that the AM3+ platform will live to see one more processor generation before it's retired. 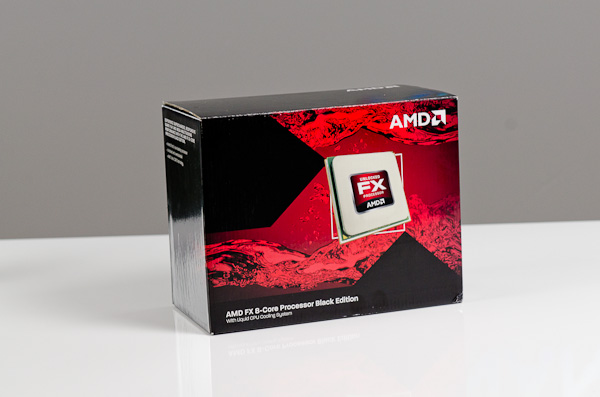 AMD's cooling system is similar to other offerings from companies like Antec and Corsair. The system is self contained, you never have to worry about adding any more liquid to it.

Attach the cooling module to your CPU socket via a simple bracket, and affix the radiator to your case and you're good to go. The radiator is cooled via two 120mm fans, also included in the box.

AMD doesn't have an exact idea on pricing or availability of its liquid cooling solution, but I'm told to expect it to be around $100 once available. My sample actually arrived less than 12 hours ago, so expect a follow up with performance analysis later this week.

For the first time in far too long, AMD is actually being very forthcoming about its future plans. At a recent tech day about Bulldozer, AMD laid out its CPU core roadmap through 2014. The code names are below:

Piledriver you already know about, it's at the heart of Trinity, which is the 2—4 core APU due out in early 2012. Piledriver will increase CPU core performance by around 10—15% over Bulldozer, although it will initially appear in a lower performance segment. Remember that final generation of AM3+ CPU I mentioned earlier? I fully expect that to be a GPU-less Piledriver CPU due out sometime in 2012.

Steamroller will follow in 2013, again improving performance (at the core level) by around 10—15%. Excavator will do the same in 2014. AMD believes that these performance increases will be sufficient to keep up with Intel over time, however I'll let you be the judge of that once we get to the Bulldozer performance numbers.

The other thing to note about AMD's roadmap is it effectively puts the x86 business on an annual cadence, in line with what we've seen from the AMD GPU folks. Although AMD isn't talking about what process nodes to expect all of these cores at, it looks like AMD will finally have an answer to Intel's tick-tock release schedule moving forward.