Netflix is undoubtedly the most widely used streaming service in the US. Most of the consumers looking to purchase the Roku 2 are probably looking for just a Netflix streamer. Keeping this in mind, we have a whole section devoted to the Netflix streaming experience. 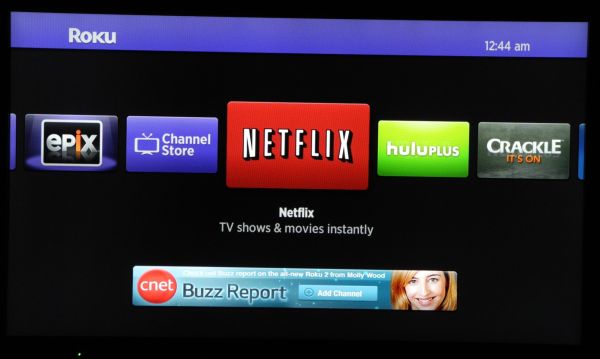 Roku 2 was introduced with some Netflix streaming improvements that finally brought it on par with the PS3 experience. To recount:

The gallery below has some screenshots of the Netflix app in action:

An important feature of the Netflix app is the adaptive bitrate streaming aspect. In layman's terms, the app seamlessly shifts to a lower bitrate stream if it recognizes that the bandwidth available is not enough to sustain the current playback bitrate. In a similar manner, it moves on to a higher quality stream as soon as the device is provided with more bandwidth.

I set up an interesting system to test the effectiveness of this scheme. Using an ASRock CoreHT 252B, I connected the wired Ethernet port of the Roku 2 to the PC, which was acting as a router. This port was bridged with the PC's wireless connection to enable access to the Internet for the Roku 2 XS. Wireshark was used to track the network characteristics of the Roku 2. NetBalancer Pro was also used to artificially limit the available bandwidth for the wired Ethernet port (and by extension, the Roku 2).

Our Netflix test stream was the 41 minute long documentary, National Geographic: Lewis and Clark: Great Journey West. I was connected to the Internet with a Comcast 20 Mbps plan, and in the first experiment, I made sure to give the Roku 2 unfettered access to all the available bandwidth. In the other experiments, I set the available bandwidth at 6 Mbps, 3 Mbps and 1 Mbps respectively. The graphs with the instantaneous data rates from WireShark are presented below.

Back in June, DSLReports indicated that the 1080p streams with 5.1 audio came in at 4.8 Mbps for the video and 384 kbps for the audio. Sure enough, we see that the default and 6 Mbps graphs show values around that mark. The anomalous value of the average bit rate (and by extension, amount of data downloaded) in the default graph are due to inaccuracies in the start and stop timestamps for bandwidth measurement. The intent of the graphs is to convey that adaptive bitrate streaming works, and indicate the bitrate which a consumer might end up with depending on their connection speed.

How low can one throttle the bandwidth before the app gives up? One might expect the multichannel audio to give way to a stereo version first, but, even at 384 kbps, the audio continued to remain at 5.1. Instead, the video quality took a very big hit. Somewhere around 384 kbps, the app entered a prolonged 'Loading' screen. After 5 minutes of waiting, I removed the throttling. As the last three bandwidth graphs from NetBalancer in the gallery below show, the app takes a good 3 - 4 minutes to move from the lowest quality stream to the highest quality stream once the bandwidth restrictions are lifted.

The Netflix app is not really user friendly, and I did find many discrepancies between the PC version and the Roku 2 version. For example, the 23.976 short movie presents a host of language and subtitle options on the PC as well as the Boxee Box. On the Roku 2 XS, I could get only English options for both audio and subtitles, and the playback refresh rate was not at 23.976 Hz. All in all, it is not the perfect Netflix experience, but one can't complain too much because this is the only sub-5W streamer that can do both 1080p and 5.1 channel audio from Netflix.