The ASRock CoreHT 252B is basically a notebook solution. It wouldn't make sense to compare it with full blown desktop Sandy Bridge solutions (or for that matter, any system with a power consumption of more than 100W). In the comparative benchmarks provided in the rest of this review, we will provide the scores obtained by the CoreHT 252B and other similar SFF HTPC solutions.

This metric is often considered meaningless, but we feel it serves as an indicator of what could be the bottleneck in a system for pre-built HTPCs. Surprisingly, it is not the HD 3000 GPU which is responsible for the score of the system. Both the RAM and the hard disk weigh in at 5.9.

The Core i5-2520M supports DDR3-1600 for its DRAM. ASRock could have used the higher speed DRAM and / or a SSD as the primary disk in order to improve this score.

The CoreHT 252B provides four USB 3.0 ports, two at the front and two at the rear. Renesas (NEC) continues to provide the USB 3.0 controllers for ASRock's mid-range HTPCs. We hooked up OCZ's Enyo 128 GB USB 3.0 external SSD (which has received glowing reviews everywhere with upto 200 MBps read and 190 MBps write speeds) to the various USB 3.0 ports of the CoreHT 252B. Using the Random Access feature of HD Tune Pro 4.50, we obtained the average read and write speeds for random sized accesses to random locations on the SSD. The performance metrics are graphed below. 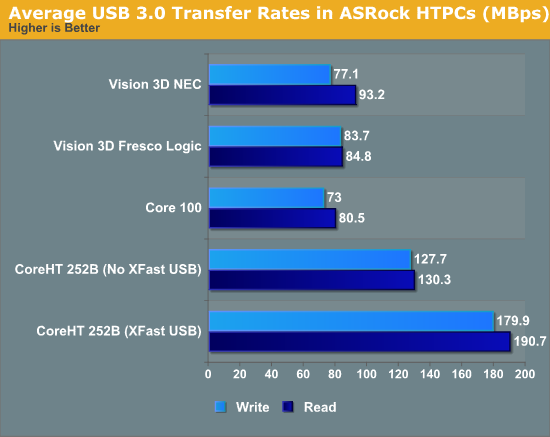 At the outset, it is clear that the USB 3.0 performance improves drastically over the Core 100 and the Vision 3D. ASRock supplies XFast USB, a driver level feature to improve USB performance. As is evident from the above graph, disabling XFast USB seems to have a huge detrimental effect on the performance. In any case, it is advisable for the users to keep XFast USB enabled to get the best out of their system.

The graphs below give an idea of where the ASRock CoreHT 252B stands with respect to performance when compared with other SFF HTPCs. PCMark Vantage's PCMark score gives a general idea of the system's capability. 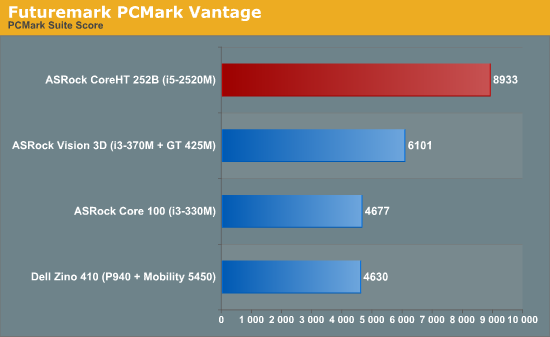 We also ran the 3D Mark Vantage and 3D Mark 06 benchmarks and the graphs below show how the Intel HD Graphics 3000 fares when compared to the GPU capabilities of other pre-built SFF HTPCs. 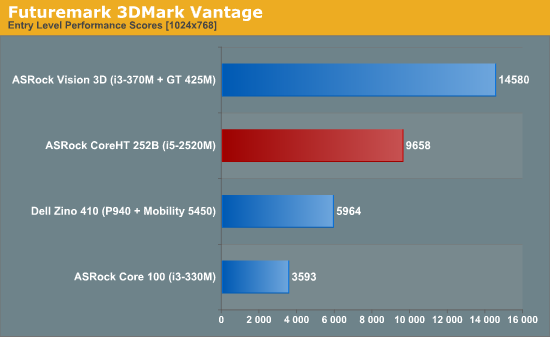 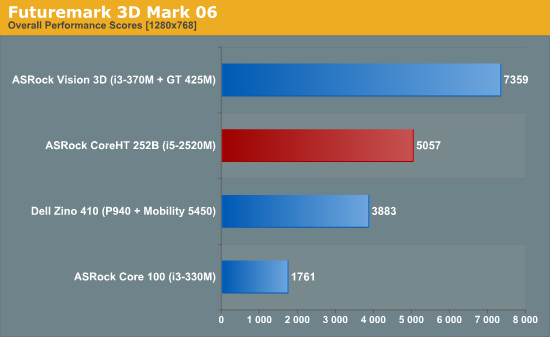 Intel HD Graphics 3000 manages to beat the Mobility 5450 easily in the synthetic benchmarks. In terms of the PC-centric scores, the CoreHT is miles ahead of the SFF HTPCs from last year. This goes on to prove that the bar for the mid-range HTPC just keeps getting higher.

In addition to the above synthetic benchmarks, a couple of commong HTPC workloads were also benchmarked. We have some data on the x264 encoding performance using the i5-2520M. Note that we are unable to utilize QuickSync for this test because QuickSync is unable to provide any for of support for accelerating x264 encode. 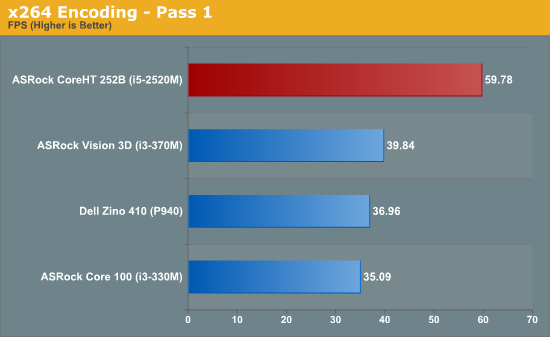 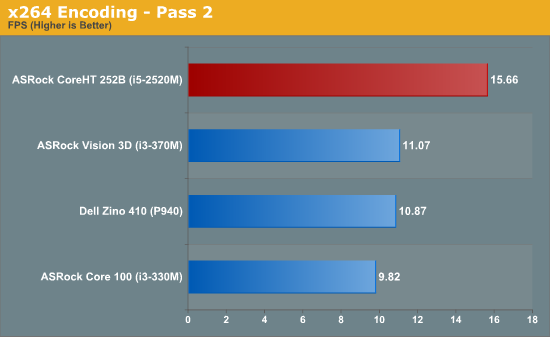 An estimate of how well WinRAR performs, particularly with respect to processing split archives, wraps up this section. To evaluate this, we take a 4.36 GB MKV file, compress it in the 'Best' compression mode into a split archive (97.1 MB each), which results in 44 files on the hard disk. The time taken to decompress this split archive is then recorded. The performance in this benchmark is heavily influenced by the hard disk in the system. It looks like both the CoreHT 252B and the Vision 3D are close to the best possible results in this benchmark, thanks to their 7200 rpm disk. 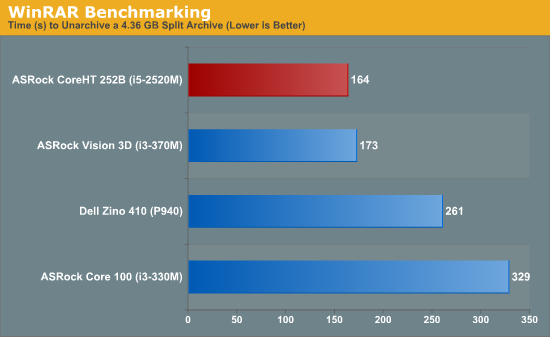 We have deliberately refrained from dealing with gaming benchmarks in this review. Serious gaming enthusiasts know that Intel's integrated GPU is not going to pass muster. For readers interested in finding out how good Intel's HD Graphics 3000 fares in our gaming benchmark, I would suggest looking at Jarred's review of the Asus K53E, which houses a i5-2520M and 6 GB RAM (compared with the i5-2520M and 4GB RAM of the CoreHT 252B that we are dealing with here).