Hands-On Powerline Networking: How Well (Or Not) Are Latest-Generation Devices Working?

My approximately 1300-square-foot geodesic-dome residence dating from the mid-1980s serves as my test bed. 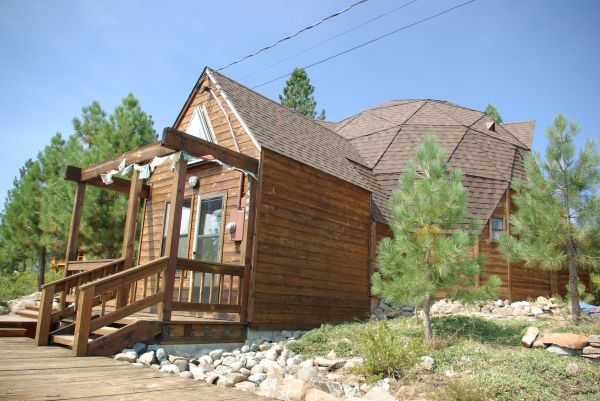 Three of the powerline-network nodes I tested were in the approximately 25-foot-diameter downstairs main room:

Next door to the router is the "mud room", containing the fourth power outlet I employed in the testing (node 4), as well as the circuit-breaker box. I used another entertainment system in the upstairs bedroom as the fifth power-line node (node 3). Each AC outlet connects to a phase of the premises' 220V power feed, but I didn’t know (and intentionally didn't try to figure out, thereby mimicking a typical consumer's approach) which phase or which circuit breaker each network node employed.

Per the discussion in the prior section of this writeup, I employed various measures to minimize the effect of attenuation for these tests. I ensured that surge protectors and UPSs weren't between any of the power-line adapters and their associated power outlets. As a long-time powerline networking veteran, I have noise filters permanently installed between the power grid and both my refrigerator’s compressor and my home’s furnace fan; neither the refrigerator, furnace nor any other motors were operating when I was logging benchmark results. I also kept fluorescent bulbs extinguished, and I unplugged all of my AC adapters, battery chargers, and other wall-wart-based and otherwise AC-to-DC-fueled devices.

With respect to benchmarking utilities, AnandTech's Brian Klug leveraged iPerf (an open-source package I've also extensively used in the past) for his recent testing of Apple's latest generation Airport Extreme router and Time Machine. And Jarred Walton harnessed a suite of software in his more recent evaluation of Bigfoot’s Killer-N 1102 Wireless Half-Mini PCIe 1.1 add-in module. In my particular case, I went with another program I'd used before, Ixia's IxChariot. IxChariot’s Console utility, a Microsoft Windows application, sets up, manages, and periodically collects data from various tests. 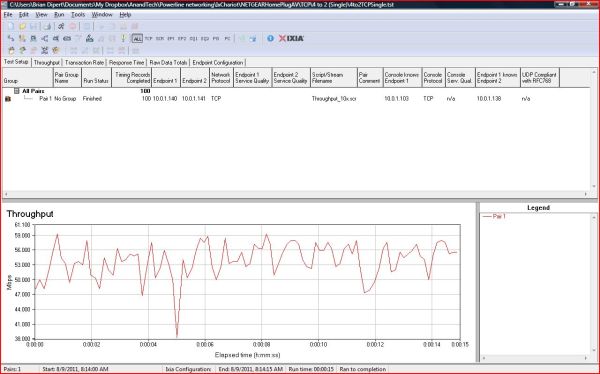 The companion network-node-resident utility, Ixia’s Endpoint, runs on Linux, Mac OS X, and Windows OSes. Console comes with more than 100 company-created scripts, and users can also customize them and create brand-new scripts. Because Console also bundles Endpoint, you can theoretically run Console from the same machine that acts as one of the tested network nodes. However, as I'd learned in the past, such a setup is not optimal for accurate testing. Using the same system CPU resources for both Console and Endpoint means that you may be unable to run either of them at full speed. Console and Endpoint functions also contend for limited networking-transceiver bandwidth.

Alternatively, as I did in these particular tests, you can run Endpoint software on two systems, with the Console utility executing on a third computer that communicates with the other two. In that case, the Console-installed PC can also have lower network performance than the others. According to Michael Githens, lab-programming manager at Ixia, “It doesn’t need a high-speed connection, [as the test links do]. It is passing less data; the results come only from the test links, not the management links.” And in fact, the Console communication with each Endpoint in my particular setup occurs over Wi-Fi, so as to not impede the Endpoint-to-Endpoint traffic flow over the power grid (which would therefore under-report the performance potential of any particular powerline networking span).

However, I chose to disregard one other Ixia setup recommendation offered by Intellon-then-Atheros-now-Qualcomm, who sells the silicon inside two of the three powerline adapters tested in this study. Qualcomm suggested that I give the Endpoint systems' wired Ethernet transceivers (therefore the powerline adapters connected to them) static IP assignments, thereby enabling them to directly communicate with each other with no periodic router overhead. While Qualcomm's proposal is likely accurate in its prediction, it doesn't match the DHCP-assigned way that the bulk of LAN clients in both corporate and consumer settings obtain their IP addresses. As such, I left the Endpoints at their DHCP-configured defaults, thereby explaining the fifth powerline adapter in my topology, connected to the router for DHCP assignments (and renewals) and other like functions.

My Console-running system is a Dell XPS-M1330 laptop, based on Windows Vista Ultimate. As previously mentioned, it interacts with the two Endpoints over 802.11n Wi-Fi connections. The Endpoint systems are both Macs, a first-generation May 2006 13" MacBook running Mac OS 10.5 Leopard and an April 2010 13" MacBook Pro based on Mac OS 10.6 Snow Leopard. Both of the latter two systems contain GbE transceivers, a critical requirement for matching up with the GbE ports in the '500 Mpbs' IEEE 1901 powerline adapters I evaluated.