With the poor yields on RDRAM, we've seen the prices on these modules sky rocket. The subsequent dislike for the i820 has allowed for the venerable i440BX to live on just a bit longer. This new generation of i440BX motherboards has allowed manufacturers to throw in nearly everything except the kitchen sink (it's only a matter of time before we see that ;).

In an attempt to offer some of the features of the i820, manufacturers have resorted to add-on Ultra ATA 66 controllers. Such was the case with ABIT's ultimate i440BX solution, the BE6-II. Now Microstar has gone down a similar path to produce what is likely to be their last i440BX board, aptly named the BXMaster. 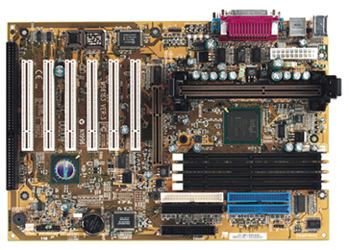 Just one glance at the BXMaster lets you know just how much they've packed into this board. The 6/1/1 (PCI/ISA/AGP) slot configuration works with the 4 DIMM slots to make this the most expandable i440BX motherboard to come through the AnandTech lab. Unlike the AOpen AX6BC Pro II and the ABIT BF6, which also sport 6 PCI slots, the BXMaster features a PCI arbiter chip that allows all 6 of those PCI slots to support bus master devices. PCI slots 1 and 6 still share an IRQ, as do slots 3 and 5. Slot 4 shares an IRQ with the onboard USB controller.

A 7th PCI device is integrated on the board itself - a Promise PDC20262 chip that provides Ultra ATA 66 support. The PDC20262 is the same chip used on the Promise's own dedicated Ultra66 PCI card. As such, you can run four Ultra ATA 66 devices off the Promise, in addition to the four Ultra ATA 33 devices that can run off the controller integrated into the i82371EB PIIX4 South Bridge. The PDC20262 features its own BIOS integrated with the motherboards main BIOS. There are no user configurable options and all drives are detected on each boot. A separate HD LED header is available for the Ultra ATA 66 devices. 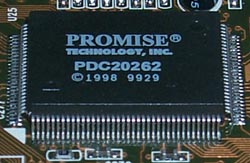 Here in the AnandTech labs, we've generally found the Promise solution to be better than the HighPoint HPT366 used on the ABIT BP6, BE6, and BE6-II in terms of compatibility. Further, the Promise controller shows up as a single device under Windows 98 which simplifies driver installation. As you might be able to guess, the Promise throws off the normal boot sequence parameters in the Award BIOS setup. MSI's solution is to look at the Promise controller like a SCSI device. A setting is included to set the boot order between the Promise and an external SCSI controller.