We started out this roundup by mentioning that Intel’s 820 chipset was embarrassingly delayed by a show stopping bug that was discovered by Dell just days before the chipsets October 25th launch.  The bug ended up being related to a layout issue with i820 motherboards that featured 3 RIMM slots and Intel pulled the plug on all i820 motherboards that featured 3 RIMM slots. 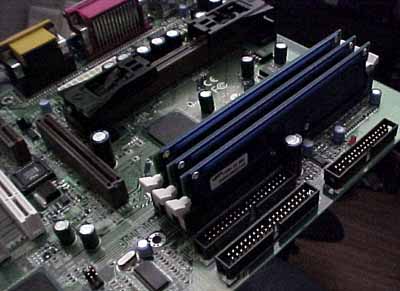 Their solution was to simply instruct all motherboard manufacturers with i820 motherboard designs to limit the number of RIMM slots to a total of 2.  While there is still quite a few unanswered questions regarding the actual layout issue (many Taiwanese motherboard manufacturers state that their designs with 3 RIMMs had no problem, while Intel tells us otherwise), all of the i820 boards that were ready to roll had to be called back and redesigned with 2 RIMM slots.

As you can guess, this does limit your memory expansion quite a bit, but almost all manufacturers have moved to 2 RIMM i820 designs.  The exception being a member of this roundup, AOpen, who offers both a 2 RIMM and 3 RIMM motherboard solution.  According to AOpen, they failed to notice any instability issues with their 3 RIMM design and, in our tests, we failed to notice a difference in stability even when using 3 Rambus modules in the AX6C outfitted with 3 RIMM slots.

We’ve mentioned time and time again that the i820’s MCH only supports RDRAM as a memory type.  This is a major disadvantage for OEMs and end users looking to use i820 motherboards in their systems primarily because of the added cost of RDRAM which isn’t being helped by recent reports of yield issues on RDRAM chips.

In an attempt to increase the acceptance of the i820 chipset, Intel provided another solution to the problem of having to use RDRAM.  By using a Memory Translator Hub (MTH) PC100 SDRAM support can be added to the i820 chipset.

The function of the MTH is to take the 16-bit RDRAM memory requests from the MCH and “translate” them into 64-bit SDRAM memory requests.  The same translation occurs upstream as well as downstream, and, as you can probably guess, this does result in a considerable performance hit.  We’ll be investigating the performance penalties associated with the MTH in an upcoming article, but for now, just keep in mind that running SDRAM on an i820 motherboard will result in a significant performance hit and you will notice slower overall performance than if you were running the same setup on a BX motherboard.

There are two possibilities for designing an i820 motherboard with SDRAM support.  One is to eliminate all RIMM slots and provide a DIMMs only solution; and the other is to use a combination of RIMMs and DIMMs.  Keep in mind that even if you have a motherboard that uses RIMMs and DIMMs you can only use one memory type at a time, and if you’re using the DIMM slots then the remaining RIMM slots must be occupied by continuity modules commonly known as CRIMMs.

The idea behind an i820 with support for both memory types is that the user can use affordable SDRAM now, and then later on, when (if) RDRAM drops in price you can make the switch to RDRAM and enjoy faster performance.

One thing to keep in mind is that a single MTH module can provide up to 4 RAS lines, meaning a total of 2 double sided DIMMs can be used or a maximum of 4 single sided DIMMs can be use per MTH.  Just because you see a board with 4 DIMM slots doesn’t mean that you can use all 4; it’s the number of MTHs you have on-board that determines how many DIMMs you can install.  We have seen manufacturers take advantage of two MTHs in their designs in order to support more SDRAM banks.