By far the most interesting motherboard out of the seven that we looked at in this roundup, the Supermicro PIIISCA features one of the hybrid 2+2 memory configurations that we mentioned earlier.  Not only does the board feature 2 RIMM slots but also an additional 2 DIMM slots and an MTH to provide for their operation. 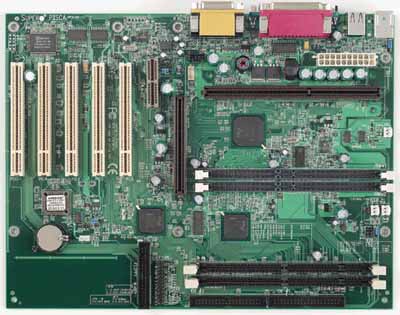 The board features 5 PCI slots, an AMR slot and an AGP Pro slot.  There is no ISA OEM option for the PIIISCA however the 370SCD, a FC-PGA 370 (Socket-370) version of the PIIISCA does feature one ISA slot.  Once again, it is very interesting to note that a desktop consumer level motherboard features an AGP Pro connector, whereas the only workstation level board in this roundup did not.

From a stability standpoint, the PIIISCA was by far the poorest in this bunch.  When using RDRAM, the test system would crash randomly to the point that the system was rendered unusable for any normal purposes.  The problems were somewhat alleviated by using the fail-safe defaults in the BIOS but the system was still very unstable.

Switching to SDRAM seemed to fix the issues but, even when using SDRAM, the PIIISCA wasn’t nearly as stable as the ASUS P3C-2000.  We are not sure if the issues were related to our sample or the board design itself, and the only recommendation we can give as of now is to be weary of motherboards that boast both SDRAM and RDRAM support.