The GA-6CX is another model we’ve had for quite some time; however, the updated shipping revision of the motherboard (1.0) features one less RIMM slot from the board outfitted with 3 RIMMs that we first tested. 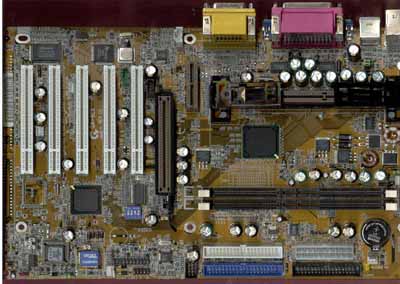 Gigabyte also made it a point to replace the poor quality set of dip switches on the early revision boards with a more reliable block that won’t break and wear out as easily as the previous ones.

The board itself is fairly standard: it features 5 PCI slots and an the choice of adding a single ISA slot which would be shared with the 5th ISA slot as an OEM option.

The most unique feature of the GA-6CX is Gigabyte’s patented Dual BIOS setup that provides a backup BIOS on-board in the event that the main BIOS is corrupted or is improperly flashed.  While most AnandTech readers haven’t had too many bad flashes in the past, this is a feature very well appreciated by OEMs that get a lot of “my flash went bad” support calls.

A few complaints that we had with the GA-6CX included the fact that Gigabyte continues to refuse to read from the thermal diode on the CPU and insists on using an external thermistor to read the CPU temperature which isn’t nearly as reliable as the thermal diode.

Finally, while the 6CX features FSB settings up to 150MHz, the lack of control over the RDRAM clock multiplier renders that FSB setting virtually useless unless your RDRAM is of an unusually high yield.

The stability of the GA-6CX was quite impressive, as we’re used to from Gigabyte, and was pretty much on par with AOpen and ASUS.