When I first saw this board at Computex, I thought it would be a good one to have in for review. It's a mini-ITX, with plenty of bells and whistles, all on the Z68 platform. If Zotac could do it within a reasonable price envelope, it was going to be a winner. After having the board in and working with it, I have found it a very good board at stock settings for $170. Unfortunately, there are a couple of areas that let it down.

On board, we've got a mini-PCIe which can act like an mSATA port (with the relevant BIOS option enabled), but comes with a wifi n card preinstalled. One thing we never really expect on a mini-ITX board are power and reset buttons along with a debug LED, but Zotac have managed to fit them on. There are also a pair of SATA 6 Gbps, a pair of SATA 3 Gbps, and USB 2.0/3.0 headers on board - less than full size boards, but plenty on a board this size. On the back panel are plenty of USB 2.0 and USB 3.0 ports, but we also have two antenna, dual gigabit Ethernet, a PS/2 port, dual HDMI 1.4a and a mini-DisplayPort connection.

The package itself is also impressive - a mini-DP to DP adaptor, an 8-pin 12V extension cable (to negate the awkward placing of the 8-pin power connector onboard), four locking SATA cables and a USB 3.0 rear bracket are surprising to see in a mini-ITX for $170. The Zotac board comes with a two year warranty on purchase, which extends to five years by registering with Zotac if you are the original purchaser.

It's hard to see exactly which market this board is aimed at - it offers a variety of features but fails on a couple to really hit a specific niche. It's a board I would suggest that people consider if they're wanting a small Z68 platform - a gamer could stick in a non-K CPU, replace the wifi with an mSATA SSD (for the caching) and add a good single GPU. The lack of the free space around the CPU limits serious coolers, however due to the lack of overclocking, a stock cooler (or an all-in-one water cooler) should be adequate.

For $170, it's hard not to consider the Zotac Z68ITX-A-E if you're going down the mini-ITX Z68 route (as much as a narrow path that is). However, with the poor OC options, H67 beckons if you don't need the smart caching and you could spend the extra money on a bigger SSD. 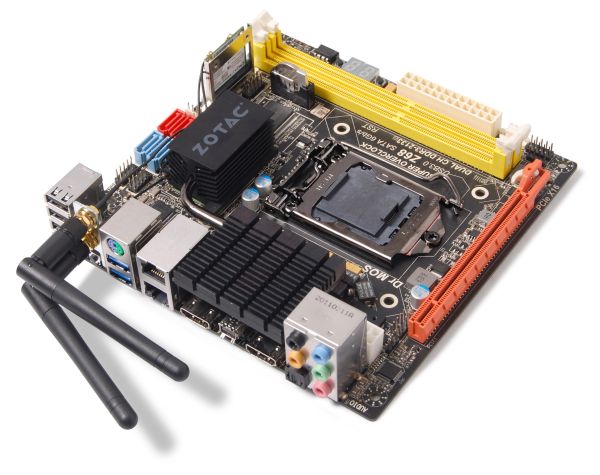