Now we switch over to the Linksys E4200 router, a dual-band router capable of up to three spatial streams on 5GHz, or two streams on 2.4GHz. Since several of the wireless cards don’t support 5GHz radios, we test with both radios on the router. For the Bigfoot 1102, Intel 6230, and Intel 6300 we enable only the 5GHz radio on the router, while for the other three wireless cards (Atheros, Intel 1030, and Realtek) we use the 2.4GHz radio. This is also going to be the real comparison for the Intel Ultimate-N 6300, as it can finally flex its 450Mbps muscle (in theory) to provide higher throughput. Again, we’ll start with the ideal tests before moving to an obstructed location.

Interestingly, many of the 2.4GHz cards actually perform worse with the Linksys router. It doesn’t matter whether we disable the 5GHz radio or not; the Atheros refuses to connect at anything more than 144Mbps (and is frequently at 130Mbps). The Realtek also negotiates a 72Mbps stream instead of 144Mbps. On the other hand, the Bigfoot 1102, Intel 6230, and Intel 6300 all connect at 300Mbps when we disable the 5GHz radio, so the two spatial streams are in fact working, but if any of these drop to a 144Mbps signal (20MHz vs. 40MHz channel), they’ll generally stay there. That’s often a “works as designed” feature, and the crowded 2.4GHz spectrum means a lot of cards will see enough stuff out there that they won’t even try for 40MHz channels, but it’s still irritating.

With the 5GHz radio enabled, the Bigfoot and Intel 6230 both connect at 300Mbps on their 5GHz radios, and the Intel 6300 achieves a 450Mbps connection…sometimes. Even though it’s in the same room as the router, the Intel 6300 often cycles between 450Mbps, 405Mbps, 360Mbps, and even 270Mbps. We worked to get it to link up at a relatively steady 450Mbps, and eventually found a sweet spot with the laptop balanced on top of a box in the center of the room, but it still drops to lower rates on occasion. Also odd is that the Atheros and Bigfoot both appear to report the maximum theoretical connection rate and don’t ever show lower values, even though performance clearly drops off. That means the Bigfoot always shows 300Mbps on 5GHz, and either 300Mbps or 144Mbps (depending on whether the router is using a 40MHz channel) for 2.4GHz.

We mentioned earlier that Bigfoot had a different set of parameters for the Netperf testing, and this is the only page where we’re using their results. As you’ll see below, TCP throughput actually improves on all of the cards compared to running the default test, but the UDP throughput is in the toilet for everyone other than Bigfoot. Intel in particular doesn’t do well on UDP with the settings recommended by Bigfoot, with all three tested Intel cards apparently capped at 3-4Mbps. This is very likely a driver optimization problem, and Bigfoot suggested that Intel has focused on 1000 byte packets for UDP performance, which is why performance drops. More on this in a second. 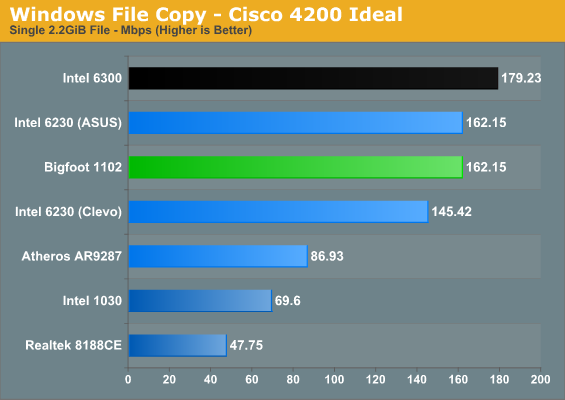 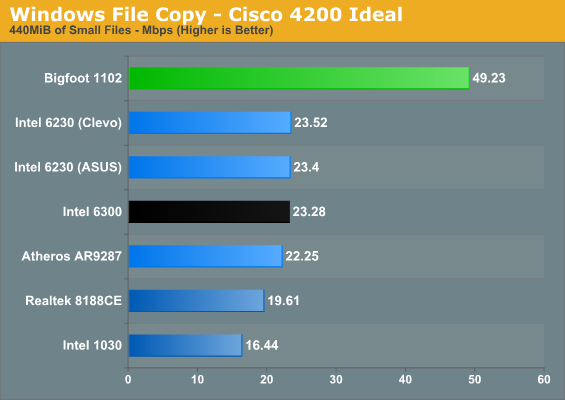 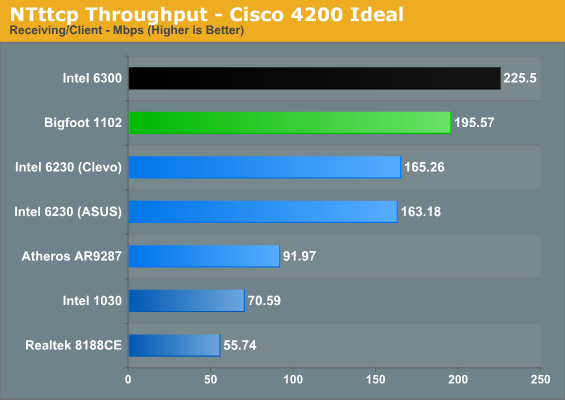 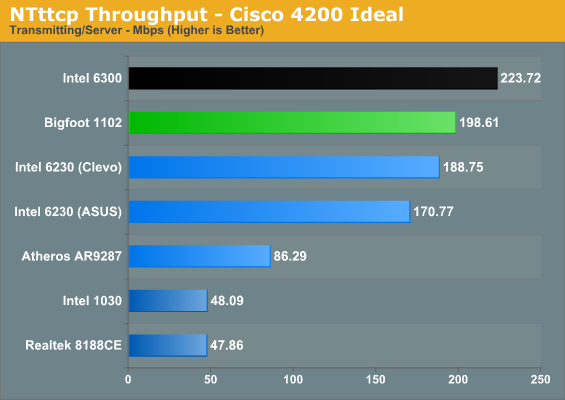 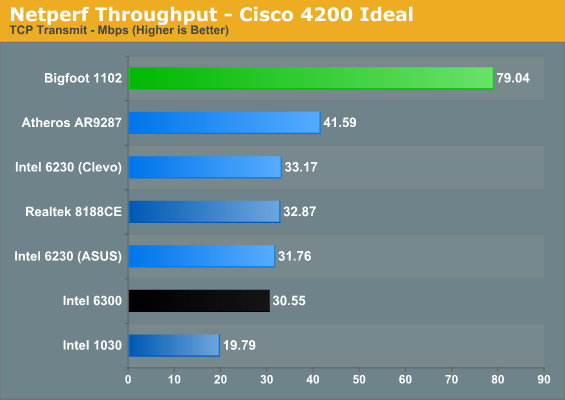 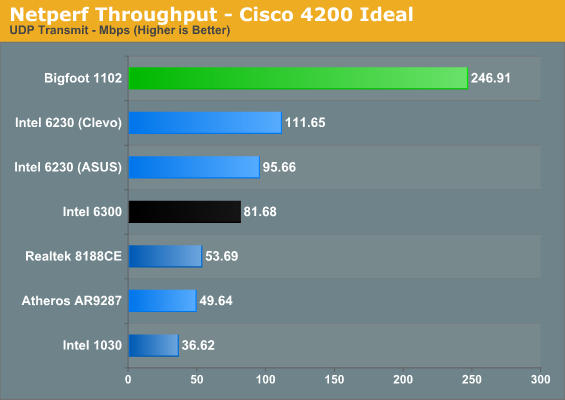 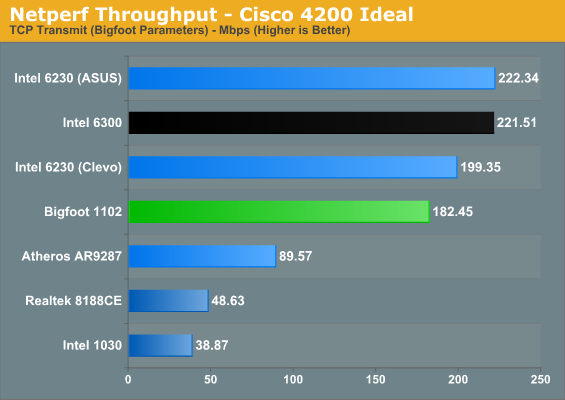 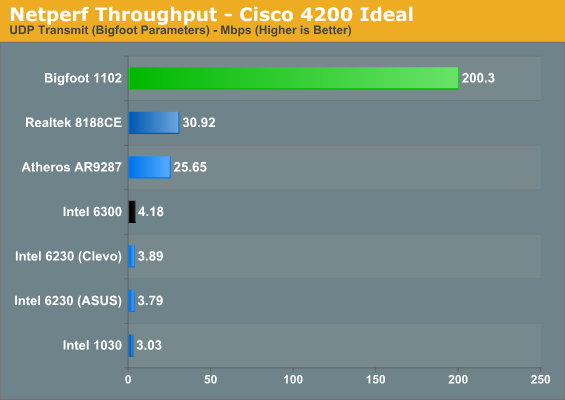 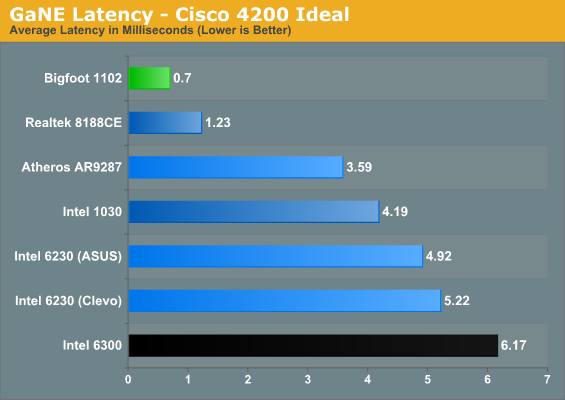 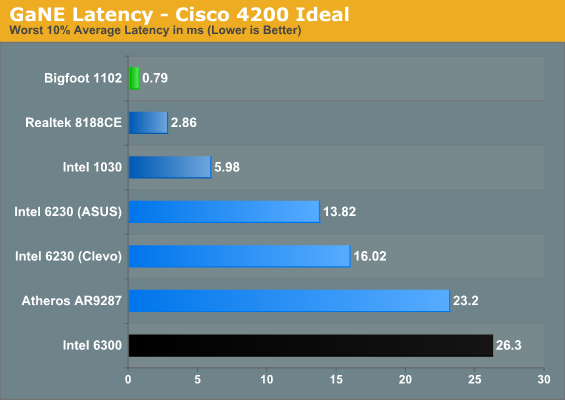 In our best-case results using the Linksys E4200, most of the performance patterns we saw with the Netgear router remain in place. The Bigfoot continues to provide stellar latency results—even better than with the 2.4GHz Netgear router—and this is reflected in the excellent small file copy result. However, now that we’re using a 5GHz radio, both Intel 6230 laptops perform much better, and the Intel 6300 can finally claim a few victories.

Where Intel’s 6300 shines is in raw throughput. The three spatial streams allow it to reach the highest raw bandwidth in NTttcp, coming in over 10% faster than the Bigfoot 1102, which in turn is about 10% faster than the Intel 6230. The single large file transfer also does well on the 6300, and the K53E 6230 manages to tie the Bigfoot—though the same laptop chassis with a 6230 still falls behind. Given the 2.4GHz radios and lower connection rates on the other cards, it’s no surprise that they fail to match the Bigfoot and Intel 6230/6300 results in tests where throughput matters.

Despite the great showing in the NTttcp tests, the Intel 6300 falters in the Netperf results and Bigfoot gets another victory. Using the default test setup, the Bigfoot 1102 actually delivered more than twice the throughput of the nearest competitor in Netperf. Switch to the Bigfoot parameters and the Intel 6230 and 6300 lead in the TCP test, but as noted above all of the Intel cards have a serious problem with the UDP testing. Of course, even if Bigfoot is correct and their UDP parameters reflect usage scenarios with larger packet sizes, we have to ask: does it really matter? UDP generally isn’t useful for transferring large amounts of data, and even 3Mbps is more bandwidth than most applications will ever need. It could be an issue down the road, but the Netperf UDP results (note that the results are for transmitting, not receiving) don’t necessarily come into play in the real world.

Do we still have a winner? It’s not quite as impressive as the results with the Netgear router, but overall the Bigfoot 1102 delivers the best experience with the Linksys router. Raw throughput isn’t often the bottleneck, particularly when gaming, and the consistency of connection, low latency, and extra utilities that Bigfoot offers certainly come in handy. If you had to pay $50 to $100+ more for the Bigfoot Killer Wireless-N wireless cards, like you did with their Ethernet Killer Networking cards, it wouldn’t be so easy to pick a winner. However, right now every laptop purchased from Mythlogic comes with the Bigfoot Killer Wireless-N 1102. If that’s not a ringing endorsement, I don’t know what is: Mythlogic is happy enough with the results they’ve seen on the 1102 that they’re no longer even bothering to offer Intel alternatives. If the 1102 is not enough, Mythlogic also offers Bigfoot’s Killer Wireless-N 1103 that supports 3x3:3 MIMO for another $15. We haven’t had a chance to test the 1103, but given the smackdown the 1102 delivers to the 2x2:2 competition, it’s pretty safe to assume the 1103 will reign supreme. (If we can get one for testing, we’ll be sure to put it through the same tests as we’ve done here.)