Before I go any further, just a warning that this is dense, and even for me there are an almost overwhelming number of tables. I struggled with how to present data and settled on the format below, which consists of individiaual tables and a few graphs at the end in case you're a visual person. There's a third option however, which is the google docs spreadsheet I used while collecting data. I've made it public for your enjoyment and it contains the exact same data. (Update: Google Apps is acting wonky and not letting me share the spreadsheet quite yet—it will be posted in a little while. Update 2: Here we go, finally got the link to the spreadsheet for your persual)

First up is the received signal strength, which will show just how much difference that extra ~140 mW will buy. In reality, it’s surprisingly hard to see the difference, but again that increase in strength is only a few dBm, so I suppose it not being very dramatic here is to be expected since this is also a logarithmic scale. That said, the Gen 5 does post numbers correspondingly above the Gen 4 on average; remember that closer to 0 is higher power and thus better. The difference is actually more visible on 2.4GHz than 5GHz based on these numbers.


Next is MCS (Modulation Coding Scheme) which shows how fast the card is connecting to the 802.11n network. Here we can see how much the 5th generation airport extreme improves MCS selection in a number of cases, especially the three spatial stream scenarios on the 2011 MacBook Pro.


Locations 3 and 4, which are in challenging environments, see massive increases, previously going from the lowest possible (or not even 802.11n) rate up to much faster rates on both MacBooks.

AFS is our next test, where we transfer a 500MB zip file up and down from an AFS server and average the throughput. On the downstream side of things, the improvements aren’t substantial until we’re in a challenging RF scenario downstairs;, here the new generation wireless card in the Airport Extreme makes a huge difference in throughput on 2.4GHz, and similarly on 5GHz, though at the farthest location it’s still impossible to connect to 5GHz.


When it comes to upstream, the results are dramatic both on 2.4GHz and 5GHz. Throughput is almost always over double, thanks probably in part to the better front end and receive sensitivity of the Airport Extreme’s new wireless stack.


Iperf is finally up, which we can run on the X300 in addition to both Macs. Here on downstream the results are improved pretty substantially for the 3x3:3 2011 MacBook Pro, and across the board for the challenging downstairs RF scenarios. The same applies on 5GHz as well, and in the best case, we can push nearly 300 Mbps on the new MacBook Pro. It’s a dramatic improvement in best case throughput if you have the right card, though the Intel card ends up performing similarly on 5GHz with both the new and old Airport Extreme card. More on that in a second.


On the upstream with Iperf things improve dramatically across the board on 2.4GHz, and marginally improve on 5GHz with the new WLAN card inside the Airport Extreme.


At the end of the day, the new Airport Extreme dramatically improves throughput in the best case and in a few regions where signal was previously unusable. In the worst case (location 4), performance improves from being essentially unusable to totally fine, and in the case of the 2010MBP goes from not being able to connect at all to pushing 23 Mbps.

So the unanswered question is how the 3x3:3 2011MBP manages to be much faster compared to the 3x3:3 Intel 6300 card, and I suspect the answer might be that the combination of BCM4331 on the client and BCM4331 on the AP enables Apple to use Broadcom’s frame bursting high speed modes—aka modern speedbooster. Careful observers will note in addition that while Iperf over 40 MHz 802.11n (with a link rate of 450 Mbps) delivers 311 Mbps of downstream, the same test on AFS is around 150 Mbps down, possibly due to compression. In addition, note how the Intel card lags behind in locations 1 and 2 until signal gets lower and then becomes competitive again. To me, this definitely seems to indicate some Broadcom-to-Broadcom enhancements are at play. Frankly for Apple this makes sense considering their top to bottom ecosystem control; if you have the ability to choose the card in the AP and the client, why not go with a solution that offers benefits?

For this testing, I just used the 2011MBP with its 3x3:3 radio, and ran through signal measurements and Iperf. First up is how signal strength looks.

You can pretty much immediately tell that things are very similar. On 2.4GHz and 5GHz the two are very comparable except in a few odd cases. Of course the propagation isn’t going to be identical between the two, but subjectively it’s close.

Next is MCS, and here things are again close, with the Time Capsule narrowly edging out the Airport Extreme on 2.4GHz, and things being very equal on 5GHz. It’s looking the same so far.

So what about performance now with Iperf? On the downstream side of things, the Airport Extreme comes out on top narrowly in all but the second location on 2.4 and 5GHz. But the difference is minuscule.

Upstream is a similar story, with the two being very close outside locations 3 and 4, where the Time Capsule narrowly edges the Airport Extreme out on 2.4GHz.

All said and done however, the two are incredibly close and despite the difference in gain that the FCC docs would lead you to believe, are virtually indistinguishable in some real-world testing. In my mind, if you’re concerned about WiFi performance, the Time Capsule and Airport Extreme both perform equally well.

If you're a more visual person and find that wall of tables and text too daunting, Anand also made some awesome graphs which I would be remiss to not reproduce here for your viewing pleasure.

First up is AFS performance compared on the 2011MBP between the 4th and 5th generation Airport Extreme. 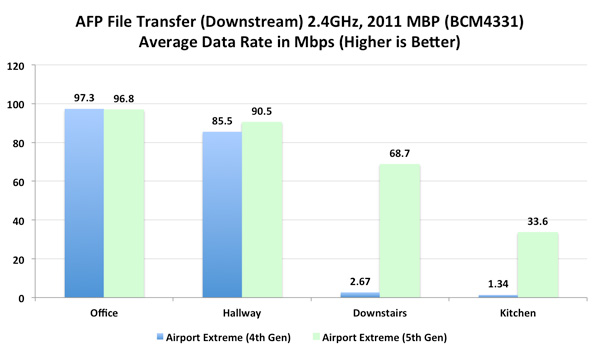 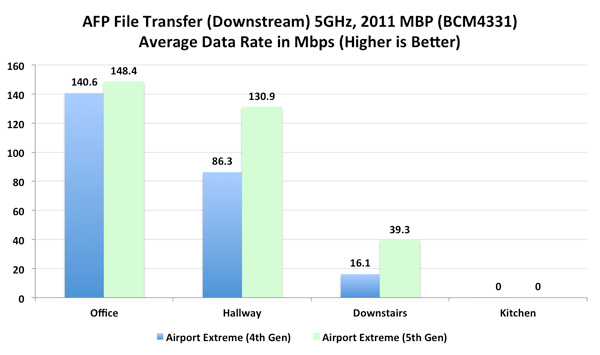 Again the main improvements with AFS (real-world file transfer) happen out at the extremes where previously signal was unusable on 2.4GHz, and likewise on 5GHz. That really tells the story of the (sometimes dramatic) difference that the higher power WLAN solution in the 5th generation makes over the 4th generation.
Next are two charts showing again that for WiFi purposes the Time Capsule and Airport Extreme are virtually identical. 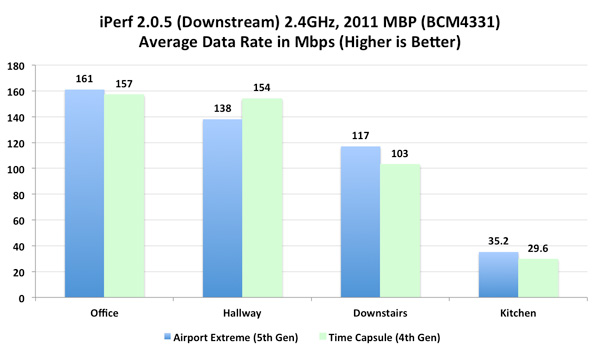 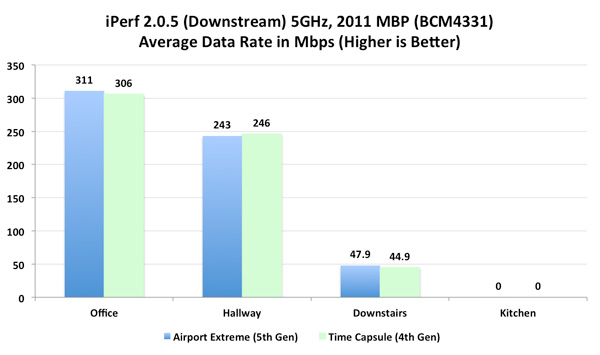 Within the margin of error, we see the Time Capsule and Airport Extreme perform very, very closely.