The 4510L’s software portal is eerily reminiscent of the SCH-LC11. I got the impression that both Samsung and Novatel device engineers built off the same Qualcomm reference design from the start, and after opening the 4510L had my suspicions confirmed. In fact, most pages and elements inside them are virtually identical if you compare the two. Nevertheless there are some significant differences between the two that bear going over. 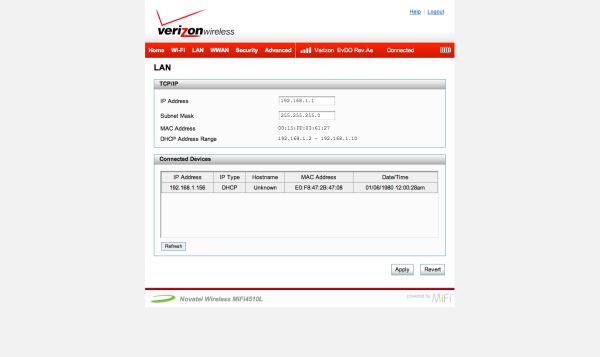 First off the 4510L uses the relatively standard 192.168.1.1/24 subnet, though the device will only assign IP addresses between 192.168.1.2 and 192.168.1.10 by default, and only allow 5 devices to attach at once. The 4510L software is also escaping the XML configuration file that normally you could download, edit, then re-upload with different settings for maximum number of allowed clients and the DHCP range, so no dice if you want to easily go above 5 users (which seems completely arbitrary given the already metered data that accompanies). I should also note that the 4510L also escapes out any edits to the <txpower> field that no doubt controls WLAN transmit power.

Moving along is the WiFi configuration page which does everything you’d expect, including let you change SSID, channel, 802.11 mode, and security. I’ve noticed in a lot of other user-submitted reviews that people have complained (both about the 4501L and SCH-LC11) that they experience disconnects and instability. I’ve found that selecting WPA2 Personal/PSK (AES) instead of personal mixed mode (which is essentially TKIP/AES) and manually selecting a channel (instead of Auto) fixes almost all the instability problems for both devices. I believe many users are leaving everything default which has some of those settings that cause problems selected. 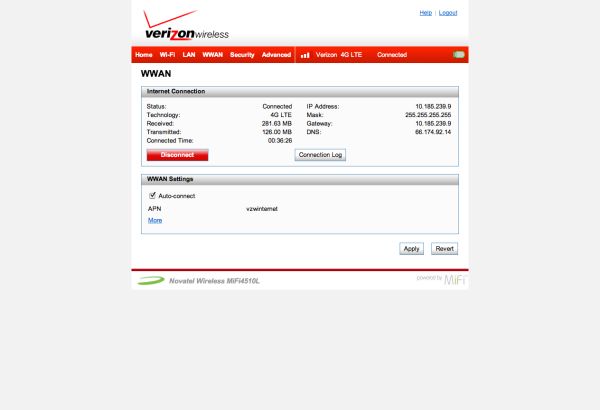 The WWAN page on the 4510L also has a strange dissimilarity from the SCH-LC11. The latter used to have a data counter that survived powercycles and no doubt was being stored in some nonvolatile memory. The former does not, and only shows data used for the current session, which is only marginally useful.

I find myself almost flabbergasted that this isn’t present on a device which is subject to mandatory capped/metered billing plans. Further, there’s no easy way to go jump to the Verizon portal where you can actually see how much data you’ve used, which no doubt lags by a few hours or is regenerated daily (I have no idea since I can’t view it from review units). To me, that makes the SCH-LC11 a winner by default, otherwise it’s going to be impossible to judge how much data one has left. 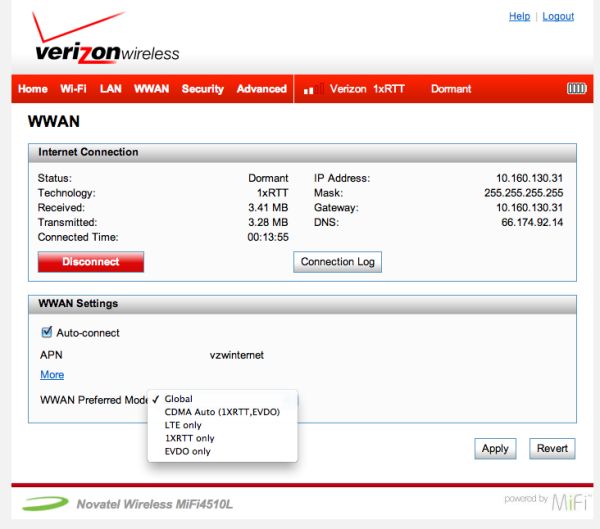 Where the 4510L beats the SCH-LC11 is allowing for one to select between each network mode manually, so you can force 4G LTE, EVDO, 1xRTT, or all of the above. This is incredibly useful if you’re right at the cutoff for 4G LTE SINR. There’s also a connection log which is semi useful, although it doesn’t do any DNS name lookups.

The Security tab includes basic things like MAC filtering, port filtering (sort of an outbound firewall whitelist - you can allow only certain services and custom ports), and of course the ability to change the password. 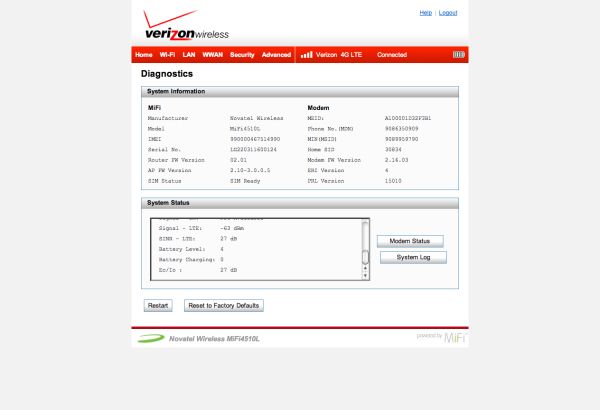 Advanced has my favorite tabs, including some basic things like whether or not SSID broadcast is on, logging, and VPN passthrough (which does seem to work, and is important for enterprise). Moving along is the configuration file page which lets you backup a plaintext XML file with all the settings (including plaintext passwords for both the device and all WLAN PSK), which is why you need to enter a password to get it. Traditionally you could edit a bunch of the fun fields in here and re-upload, now it seems that Novatel is only paying attention to certain fields and escaping others, as you cannot edit txpower or the number of max allowed devices and re-upload the configuration file.

The diagnostics page is my particular favorite - tap Modem Status and you get some actual information about what signal strength is in dBm, including the all important SINR (Signal to Interference plus Noise Ratio) quality metric for LTE, and Ec/Io for 1x/EVDO. There’s also a handy band class type field which shows what cellular band the device is operating on. I’ve yet to see the 4510L use PCS (1900 MHz), but no doubt that works. Hit system log with logging enabled and you’ll get some console output including when devices attach and buttons are pressed.

Under the power tab you can turn the shutdown behavior between never and increments up to an hour. There’s no ability to change how the device behaves specifically for when it’s plugged in, but never should get the job done if you intend to use it plugged in. Also, the 4510L doesn’t appear to discharge under heavy use when plugged in, unlike the behavior I saw with the SCH-LC11.

I've put everything that I have gathered in a gallery below, which should be a complete tour of all the configuration pages on the 4510L.

Lastly, although the 4510L doesn't officially include device-as-modem support, I was able to make it work, once. I already had the latest Novatel Wireless drivers installed, and lo and behold saw the 4510L pop up as a device in network preferences on OS X 10.6.8. I quickly configured things, put in the vzwinternet APN, and hit connect. It worked just once, and I have no idea why that particular time I was lucky.