Snow Leopard is going to get the new Safari 5.1 when it comes out, so its users will be able to take advantage of JavaScript performance gains, support for new standards, and the security patches included in most new browser releases. In Lion, however, Safari gains a few new OS integration features that probably won’t be backported.

The best of these is a new download manager, which instead of being a separate window (IE, Firefox) or tab (Chrome) is a clickable drop-down window located in the upper right-hand corner of the browser window. Initiating a new download makes the file visually fly up to the button (more of OS X’s visual frippery), and you click this button to check on your downloads’ status (a small progress bar is visible at all times to give you a general sense of how your downloads are going). 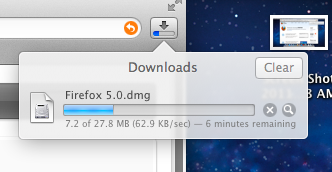 As a heavy Chrome/Firefox user, I hope Google and Mozilla are paying enough attention to create their own versions of this.

The second is less interesting, but still useful - logging into a recognized email service (such as Gmail or Yahoo!) will invoke a dialog box asking you if you’d like to setup the account with OS X - this will sync your mail, calendar, and contacts for you (if the services are available from your email provider).

This generally works pretty well if you want to use the client apps, though I prefer to stick to web clients where possible.

iChat is still largely the same program it has been for some time, but it adds some enhancements it needs to protect itself from web clients (Google Talk, Facebook Chat) on one hand and existing third-party all-in-one clients (Adium, Trillian) on the other. It's all about adding support for different chat protocols, and to this end iChat in Lion adds support for Yahoo! Messenger and video chat, and also for the addition of other protocols via plug-ins. These plug-ins need only be downloaded and double-clicked to be installed.

In use, iChat now presents you with a unified buddy list, with friends across all protocols showing up in one window instead of multiple windows. Conversations with different people show up in a single, vertically tabbed chat window (see above), which allows you to easily switch between conversations without switching between windows. You can break these out into separate windows by clicking and dragging the tabs, same as with most modern web browsers.

OS X's built-in text editor gets a couple of small enhancements: for one, it gains a more useful formatting bar, which is a nice change, and it also gains Versions support.

Despite these enhancements, anyone who needs to do real word processing is still going to install Word or Pages at his or her first opportunity. It's certainly nice to have a built-in program that includes basic support for most document file formats, but it's not exactly a replacement for a real word processor.

Preview in Lion adds Versions and full screen support, along with a new "Import from camera" feature, which will let you (among other things) take a picture of your signature with your iSight/FaceTime camera to sign PDF forms.

QuickTime X, now at version 10.1, can cut, copy, and paste video and audio, restoring a missing piece of QuickTime Pro functionality that was much missed when Snow Leopard launched. It also gains the ability to trim, crop, rotate and resize video, as well as insert other videos - all of this makes QuickTime X more capable of serving as a basic video editor. Full screen support is also available; Versions support is not.

Trimming a video in QuickTime X

The screen recording feature can now be trained onto a single area of the screen, rather than just the whole screen - this mirrors the OS’s ability to do screen captures of a single window rather than the full screen. Simply invoke the screen capture feature and drag a box around the window you want to record. 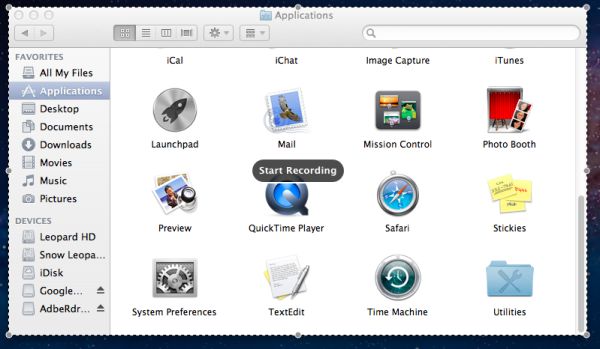 Selecting a portion of the screen to record

Sidenote: Can anyone tell me when Apple plans to replace QuickTime 7 for Windows users? Seriously, if Apple could deliver something like this for Windows, QuickTime would go from being “that thing that installs with iTunes” to a really useful program. It doesn’t seem likely or anything, but I’m just saying...